Why Accessible Design is Good for Everyone

The best designs are often the ones we don’t think twice about because they blend so seamlessly into our environment and benefit everyone who uses them. While it may go unnoticed, creating purposeful, accessible design often takes input from a variety of stakeholders; without consideration for and input from everyone, rather than from one specific user, accessible design can fail to hit the mark. Creating a seamless environment that supports all learners – with the input of a variety of stakeholders – is what Macmillan Learning strives to do as we develop our products and services.

To learn more about accessible design, Macmillan Learning recently sat down with Senior Development Editor, Sherry Mooney, and Associate Marketing Data Analyst, Vera Sticker, who also serves as the Cultural Awareness and Education Committee Lead for Macmillan Learning’s AVID (Awareness of Visible and Invisible Disabilities) Employee Resource Group. In our conversation, Sherry and Vera explained what the Curb-Cut Effect is, and they offered several great examples of architectural and product designs that benefit everyone - not only those with disabilities.

“We’ve all been there,” Vera said, “trying to push open a door designed to be pulled because of a misleading handle.”

“Or trying to get a stroller, wheelchair, or suitcase over a curb,” Sherry added.

“People with disabilities face these obstacles regularly, sometimes on a daily (or even hourly!) basis,” said Sherry. “Over the years, as disability awareness has grown, many commonplace things have been modified or redesigned to enhance accessibility.”

“And this has led to a very cool discovery: time and again, the more accessible the design, the better it tends to be for everyone, with and without disabilities,” said Vera.

Such consistent results have warranted a name for this phenomenon: the Curb-Cut Effect. The discovery of the Curb Cut Effect led to a new design philosophy known as Universal Design, for which the University of Washington offers a lengthy but usefully precise definition.

Sherry and Vera provided three great examples of the Curb-Cut Effect in architectural design and products that people encounter or use on a daily basis. 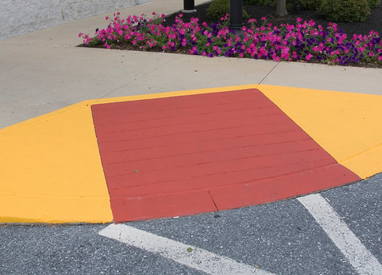 “Obviously, we have to start here,” said Vera. According to Sherry and Vera, curb cuts started appearing on American sidewalks in the 1940s and 1950s, when a few communities decided to invest in more accessible environments for disabled veterans. Thereafter, with the pressure from disability rights activists, the Americans with Disabilities Act of 1990 led to curbs being cut in every corner of the country.

“It was a big win for people in wheelchairs, but they were far from the only ones to benefit,” said Vera. “Curb cuts made life easier for anyone navigating with a stroller, shopping cart, rolling luggage, and just about any other thing on wheels.”

“Another great example is the ‘Good Grips’ line of kitchen tools by OXO,” said Vera. “Although Good Grips products can be found in many kitchens (and almost every home goods store), the first product was created by Sam Farber with just one person in mind: his wife, Betsy, whose arthritis made it difficult to use a standard peeler.”

Farber founded OXO to create a line of tools that were easier for everyone to use, regardless of ability. The company applied universal design principles from the beginning, rather than trying to retrofit existing products.

“The first modern sliding doors weren’t created for people with physical disabilities,” explained Sherry, “but for a different group of people who still had trouble in their environment: the residents of Corpus Christi, TX, which is one of the windiest cities in the US.” In 1954, Lew Hewitt and Dee Horton recognized this community’s struggle to open and close swinging doors, so they invented the automatic sliding door.

It’s not enough to only consider certain groups of people and to think of solutions based only on that group. In other words, adding accommodation for whomever might be deemed as the “default” user is not the same as removing barriers and increasing accessibility for all.

Universal Design is not limited to architectural design and products, but can be extended to the ways in which society as a whole is organized. Some companies offer their employees the flexibility to shift their working hours or to work longer on some days and shorter on others.

This would make jobs more accessible to those with chronic concerns like pain or fatigue because those individuals would be able to work when they feel best and rest when they need to. Many jobs offer this option as an accommodation when it’s specifically requested, but offering this sort of flexibility can make things better for everyone in terms of work/life balance. A good example of this benefiting everyone would be how it would allow those with different sleep schedules to be more productive during the times of day when they are feeling most energized and motivated.

“Obviously, this sort of approach wouldn’t work everywhere – for instance, in a retail or restaurant position* – much the same way that we don’t all have automatic sliding doors in our houses,” said Sherry.

There are requirements for particular places and roles that necessitate particular design choices. Whenever it is possible, however, universal design can point to better solutions for all users – and a better society for everyone.

*Sherry and Vera note that the most limiting positions are often held by those with fewer options because of structural economic, racial, or educational discrimination. Therefore, even as we acknowledge the challenges of universal design in these more constraining situations, we also embrace the challenge of trying to find ways to continue to apply universal design and to improve access and quality of life unilaterally.