The Most Wonderful Field in the World: A Conversation with Dr. Prinstein About Clinical Psychology

There are a lot of misconceptions about the relationship between psychology and science, and Dr. Mitch Prinstein is on a mission to change the hearts and minds of those that hold them. His passion for creating a better understanding of clinical psychology and teaching the science of mental health is aptly reflected in the many papers and books he’s written over the years. In his current role as Chief Science Officer for the American Psychological Association, he sets the science agenda and advocates for the application of psychological research, and in his role at Macmillan Learning, he’s a co-author of the popular Clinical Psychology title used in college courses.

At Macmillan Learning, we appreciate that the success of our textbooks and courseware is in large part due to our outstanding authors. We want to offer students and instructors an opportunity to get to know these extraordinary authors, whose remarkable careers and interests often extend far beyond higher education. For that and so many more reasons, we partner with authors like Dr. Prinstein, who dedicate their lives to their fields and are just as passionate as us in improving students’ lives through learning.

We spoke with Dr. Prinstein about his career, teaching and learning about psychology, what’s next in the field, how we can help fix the mental health crisis, and, of course, the revised edition of Clinical Psychology. Throughout our conversation there was a constant theme -- the importance of science and research in the field.

There was no one particular milestone or “aha” moment that inspired Dr. Prinstein’s career path, but two things helped it along the way: mentorship and observation. His early inspiration came from his own experience as a child and adolescent; Dr. Prinstein was attuned to and interested in how kids got along with each other and the different kinds of popularity that he observed. While he didn’t know it at the time, it was his first foray into the field. “When I began pursuing clinical psychology, I had no idea that my childhood observations were an area of scientific inquiry.”

Dr. Prinstein began his academic career as an assistant professor and later director of clinical psychology at Yale University. In his first academic jobs, he started every morning by reminding himself to have learning goals rather than performance goals. “I had to remember that mistakes and failures were the reason why it takes many years to get tenure.” An assistant professorship, he believes, is like a faculty-in-training program and there is a lot to learn along the way. He later became Professor of Psychology and Neuroscience at UNC-Chapel Hill, where he also mentors students from the Clinical Psychology and the Developmental Psychology programs.

In his teaching roles, he was a consummate ambassador of the science of clinical psychology, and was known for his commitment to supporting the professional development of students. It’s that passion that drove him to take professional leave from his role at UNC and take on one as the Chief Science Officer for the American Psychological Association.

Writing is Another Form of Teaching

Throughout his career, Dr. Prinstein maintained a focus on the academic inquiries that had first inspired him, with 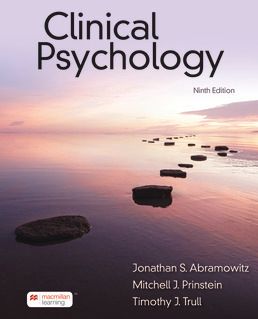 critically-acclaimed research on popularity and its effects that has been called “eye-opening.” From course materials like Clinical Psychology (more on that book later) to trade books such as Like Ability: The Truth About Popularity, his goal is to open the world of psychology with academic, yet approachable, books that can be read by anyone -- whether they are studying psychology or are simply curious.

For example, in Like Ability: The Truth About Popularity you’ll learn that people who pursue popularity based on status rather than likeability end up unhappy, and in Popular: Finding Happiness and Success in a World That Cares Too Much About the Wrong Kinds of Relationships you’ll learn different ways to build strong emotional appeal that help you stand out from the crowd and succeed. These are just some of the many takeaways.

I was curious as to what drove him to become such a prolific writer. As it turns out -- it’s teaching.

“Writing is another platform for teaching,” he said. He enjoys it in particular because he can help people learn from his mistakes and can also help cultivate a love for the field of psychology. His own teachers made such a difference to him. In fact, he credits the opportunity to work with his “selfless and generous” graduate school mentors Dr. Annette M. La Greca and Dr. Anthony (Tony) Spirito as the inspiration for some of the most important milestones in his career. Through his work with them, he learned what it meant to be a psychologist and to have a service-oriented perspective.

He mentioned that in his own teaching, writing and research, he aims to be impactful and helpful, noting, “It's something I think about and work towards every day.” Dr. Prinstein believes strongly that his greatest accomplishments may be yet to come, as he seeks to continue to make contributions to the field and his students. “Writing has always been a way for me to help people learn from my mistakes,” he noted. By that he means that his career successes happened in spite of what he came into the field knowing, rather than because of it.

He wants students to know the things that he didn’t, and have awareness of the things he wished he knew. For example, when he was a grad student, he found that academic psychology was a complex field to navigate. “We learn a lot about how to do research, and if we’re lucky we learn how to teach a part of class. But those are such a small part of what careers in academic psychology include. We’re also mentors, we do admissions, hiring and grant writing and we work on running labs, which are like small corporations.” To help students navigate the complexities, he put together a manual with professional development advice, which turned into a mentoring book and professional development resources.

“We need to reboot the field of clinical psychology”

With ongoing research, the field of clinical psychology is ever-evolving. Despite the fact that knowledge is obtained through verifiable evidence of behavior and mental processes, there are plenty of misconceptions -- primarily that it isn’t a science. There’s much that can be done within the field, the practice and by the education community to rectify that.

Dr. Prinstien believes that within the education community, there should be more emphasis on communicating the scientific basis that underpins clinical psychology, and that doing so has become increasingly important with the current mental health crisis. Further, he believes that mental health should be thought of in the same way as the other sciences, noting that there are proven and tested methods and approaches that have undergone clinical trials and new approaches that are based on what we understand scientifically. “For too long there’s been confusion in the public about how psychology has been depicted. And how much of what we do is in fact based on science,” he said.

As the field looks towards creating better equity and helping with the mental health crisis, the models of how patients are treated needs to change. Dr. Prinstein noted that the current model is not sustainable over the long term, and doesn’t address the growing and changing needs of our society. “There’s more that can be done to reach people who need help,” he said. “Psychologists meeting one-on-one with patients alone will not get us to help as many people as needed. It won't create the equity we all care so much about when it comes to reducing mental illness.”

But it’s bigger than just changing the treatment model. “We need to reboot the field of clinical psychology.”

For his part, Dr. Prinstein would like the field to explore how to help train providers to support people who may never go into traditional therapy. He believes that another question the field should be asking is how to better build prevention techniques, “so that things like media consumption and kids video gaming are providing skills and learning that help to actually prevent mental illness.” Additionally, he would like to see mental health be considered alongside physical health as part of an overall holistic perspective of health. “We should understand that the ability to work, be a parent, be a partner, take care of your body -- a person’s overall daily function -- is related to psychology.”

But change doesn’t happen overnight, and it can’t happen with just one person. Dr. Prinstein believes change is more likely to happen when an entire community is ready to make that change. “No matter how much blood sweat and tears you might put in, it really takes all the people that you're directing change towards to be open and willing to receive and participate in that change.” In his role as Chief Science Officer for the American Psychological Association he’s learned that while one person can make an impact within the field, it’s more commonly done with many different teams and perspectives.

“If at the end of your work you can see your smudged fingerprints in a sea of thousands of other fingerprints that have helped to produce something or move something, then that's a job well done.” By sharing his knowledge of what it is, how it has evolved, and what it could be, there is an opportunity to teach people about what he calls “the most wonderful field in the world”. He believes that the new edition of the print and digital textbook offers a more modern take and helps to demystify clinical psychology.

Prinstein believes that the more people recognize and care about mental health, and the scientific underpinnings of clinical psychology, the better off society will be. He also noted that when you demystify clinical psychology, you allow people to see themselves as being an important voice in the science or practice of it. “We want students to say ‘that’s something I can do,’” he said.

Importantly, he believes that writing course materials is “a great way to help people see clinical psychology in a multicultural and scientific framework from the start.”  He noted that the enhanced focus on inclusive practices and how the field can improve in supporting different communities was the part of the revision he’s most excited about. “We have a very direct, candid and important dialogue throughout the entire book about the limitations of clinical psychology and the opportunities to be more focused on equity, diversity and inclusion.” This dialogue can be found in a new podcast within Achieve for Clinical Psychology which features interviews with leading clinical psychologists who talk about their research and practice.

He believes that the best is yet to come in the field, and hopes to inspire others to learn more about the field. “My hope is that everyone who takes the class and uses Clinical Psychology either becomes a clinical psychologist or becomes an ambassador of this knowledge.”