The Living Legacy of Cesar Chavez

In the summer of 1980, my family moved into our first home. I was six years old and was excited to have my own room, two floors to scamper through, and a yard. That home would be where my sister and I would spend the remainder of our childhood. It would serve as the anchor to a young life filled with school commutes, church functions, community service, summer jobs, and family outings. We had a sense of permanency in a world that constantly demanded our attention with each passing year. 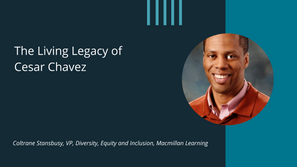 That same summer that we moved into our new home, my father, who taught sixth grade at the elementary school we attended, accepted an assignment to teach New Jersey’s Migrant Education Program. We thought that it was odd that during the summer, when most teachers took a break from the challenges of the urban classroom, my father drove out each morning to help educate a much-forgotten population of students - the children of migrant workers. These children came from Black and Latinx families from the rural south who made their way to New Jersey to work the Garden State’s tomato crops.

For most of the school year, I’d watch my dad struggle with the challenges of educating our city’s urban youth, many of which came from single parent homes or foster home environments in poor neighborhoods. By the end of the school year, he would come home exhausted and depleted from playing so many roles all year long- surrogate father, life coach, and disciplinarian all in one.  I didn’t understand why he wanted to give his summers, his only reprieve from the chaos of the inner-city public school, and give his time to the children of migrant workers.

One day during that summer of 1980, I asked my father why. He told me that my mother had told him stories of the work she had done as a high school student volunteering as part of the Interfaith Youth Council to prepare food and provide clothing to migrant worker families.  Her stories about the tough conditions that these families endured, on the job and in their home life, had lit a spark in him to do something intentional about it as a young teacher.  He learned that there was a national movement to bring attention to the work standards and quality of life of farm workers that was being led by a charismatic and powerful organizer named Cesar Chavez.

My father described the justice and equality that he was fighting for as an extension of the foundational civil rights work done by Dr. Martin Luther King.  He and my mother were teaching me through their work, that there is always a marginalized group in our society that deserves the sense of permanency and promise that comes from a quality education, decent housing, and fair pay.  I learned that the wave of protest, awareness, and legal action that Cesar Chavez had sparked while organizing farm labor in California in the 60’s was alive on the East coast by the early eighties, inspiring a new generation of activists, organizers and educators like my father and mother.

My parents represented the realization of Cesar’s dream to protect the most vulnerable populations in our society- the American family with no permanent residency, no job security, and little formal education. I looked at the new house that my sister and I were so excited to now occupy as a privilege never to be taken for granted. I learned that there were courageous leaders, like Cesar Chavez, who dedicated their lives to fight for the basic rights of America’s forgotten families.

During this year’s observance of Cesar Chavez Day, I’m honored to know that his enduring legacy of selfless service continues to inspire generations of activists, advocates and educators to fight for a more inclusive and equitable America where all have the right to a meaningful and fulfilling life.