Skateboarding and Precalculus: An Unlikely Pairing Made Possible by Olympian Lizzie Armanto

The cover of Macmillan Learning’s first edition of Preparation for Calculus features a picture of Olympic skateboarder and X Games champion, Lizzie Armanto. For many students, Lizzie’s image provides a point of entry into the course; math can be cool, and everyone should feel welcome to enroll.

Macmillan Learning asked Lizzie what it meant to her to be featured on the cover of a textbook, to reflect on her own schooldays, and if she had any words of encouragement for students pursuing something new or challenging. 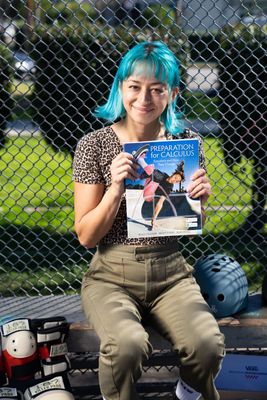 Not at all. I think people are more excited about the cover of Preparation for Calculus than they were about Transworld.

Lots of students on social media are saying that seeing you on the cover is the first time they've felt represented by a textbook, and it's inspiring them to consider the course. What would you say to them?

Studying/learning new things can be challenging and maybe even daunting. Applying math to skateboarding is a fun way to make learning and practicing new 'math things' relatable. Hopefully it makes the work seem less like work and more fun.

Can you describe for those of us less knowledgeable about skateboarding the maneuver or trick you’re performing on the front cover of this book?

The trick is called a “frontside invert” aka “frontside handplant”. You basically go up the wall forward and as you approach the lip, or “coping” of the ramp or bowl, you reach out with your leading hand to grab the lip while at the same time grabbing the toe side edge of your board with your trailing hand. Your body will instinctively turn towards the direction you turn your head and the forward momentum combined with looking over your forward facing shoulder as you leave the bowl (hands still holding the lip and board respectively) will naturally bring you back around towards the ramp or bowl. You have to pull your weight in sometimes in order to make sure you do not land on the deck of the ramp. Once you’ve come all the way around and have spotted your re-entry point, you bend your knees and begin to slowly stand as you’re entering back into the ramp or bowl. This sounds complicated but once you see it, the trick is actually pretty simple.

What’s a fond memory that you have of your school days, high school or college, outside of skateboarding?

Still to this day, when I walk through the history building in Santa Monica High School, I can remember feeling a cesspool of emotions in ninth grade. Everything was new to me, the classes, campus, teachers, and kids. I knew I wanted to pursue skateboarding but at the time it felt like some far off dream. There were a few teachers that made my high school years pretty enjoyable. Their passion for what they did or the subject they taught had an impact on me. Teachers don't get enough credit and the bad ones really give the rest a bad rap.

You competed for Finland in the 2020 Tokyo Summer Games. What have you learned while training for the games that may help students as they face their own challenges?

Aside from rehabbing a serious injury nine months prior to the Olympics, I didn’t really change anything as far as training or preparing for the Olympics. In all actuality, the Olympics was one of the easier contests for us as professional skaters are concerned. Due to the quota system, no country could send more than three qualified skaters and with the majority of top pros being from three countries (USA, Brazil, Japan) there were quite a few top skaters who could have medaled but were not able to compete in Tokyo because they fell outside of the country quota. X Games and Vans Park Series (pro tour) are much more competitive than the Olympics were.

You’ve been described as a trailblazer in the sport of skateboarding. Less than twenty years ago, women were earning less than 5% in winnings compared to men's event winners in the X Games. When you won skateboard-park gold in your first X Games in 2013, the prize amounts were equal. What advice would you give to other women and girls pursuing their dreams in male-dominated fields or spaces?

Don’t be afraid to go for it or fail. Everyone has to start somewhere. Be patient with yourself and just keep at it, eventually you'll get to where you want to be if you keep at it or maybe even end up somewhere better.

You’re passionate about promoting the sport of skateboarding in lesser developed countries, and you’ve helped run skateboarding workshops, clinics, and demos. Why is it important to share skills with others?

Skateboarding is such an amazing lifestyle and teacher of things on and off the skateboard. Skateboarding teaches resilience like when you fall, you get back up. Little things like this go a long way when you start applying it to other areas of life.

You can follow Lizzie on her Instagram and see her on the cover of Preparation for Calculus here.