Chris Cardone, Senior Executive Program Manager, reflects on the loss of one of our esteemed authors, Albert Bandura. While he was known for his groundbreaking research in psychology, and is among the most cited in the world, he was also a colleague and a friend.

I had the distinct privilege and honor of working with Albert Bandura on his moral disengagement book with Macmillan Learning/Worth. But more than that, I got to know Al as a person – a warm, kind, humble, caring, jovial human being. Here are some of my experiences so that you will know more about him, beyond the Bobo doll.

The first time I met Albert (Al) Bandura was at the Midwestern Psychological Association meeting in 2013. We met for tea before his presentation in the grand ballroom of the Palmer House. My anticipation was overwhelming, palpable, realizing I was about to meet the greatest of all living psychologists. However, Al put me immediately at ease and began talking with me about his ideas for his new book about moral disengagement. Shortly thereafter, he gave the PsiChi Distinguished Lecture to a room packed to capacity and then some -- standing room only and a line out the door. 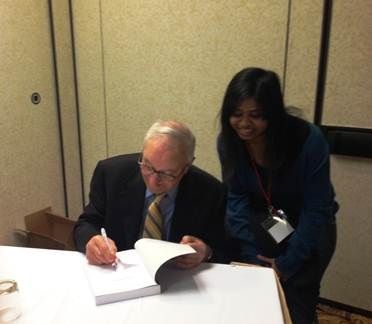 Afterward, as the publisher of his Self-Efficacy book, Macmillan Learning/Worth hosted a book signing where students and professors lined up for his signature on copies of his books, Bobo dolls, and even translations of his works. The line stretched out the door and around the corridors, as you would imagine. But Al signed every last item with good humor and attention to each person, especially the students. Getting him out of the hotel was like chaperoning a rock star, with people chasing after him all the way to the elevator. A rock star he was!

Al would always say, “The Bobo doll follows me wherever I go,” but of course his work goes beyond the Bobo doll and has stretched across many domains, and not just in psychology. His goal was always to apply his theories for human betterment.

When I interviewed him with a film crew at Stanford University for the Macmillan Learning/Worth video series in 2015 (don’t miss it in our LaunchPads!), he was delighted to share how his work has been applied in various ways. For example, he was very proud of his work with the Population Media Center and often spoke of it. The Center created programs and serial dramas showing people acting out scenarios related to family planning, social injustice toward women and girls, climate change, and other issues, all using his research to model positive outcomes in Asia, Africa, and Latin America. He was changing people’s lives for the better. 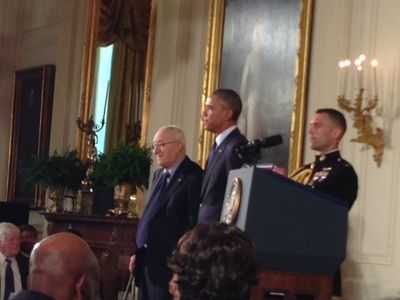 On May 19, 2016, President Obama presented Dr. Bandura with the National Medal of Science

In our interview, he also spoke about his early formative years where he sought resources within very limited socioeconomic conditions. He believed it was the actual beginning of developing a sense of personal agency: He said, “In a way my psychological theory is founded on human agency, which means that people have a hand in determining the course their lives take, and in many respects my theory of self-efficacy is really a reflection of my life path.”

I greatly appreciated how Al spoke about fortuity and self-efficacy and I’d like to share his words that have always resonated with me: “…in my theorizing I said there are two ways in which you can exercise some influence on the fortuitous character of life.  One, you can make chance happen by leading an active life and exposing yourself to a lot of different ideas, doing a lot of different things, and so on, so you'll be creating a lot of intersects.  And the second, you can make chance work for you by developing your interests, your competencies, and other personal characteristics so when a fortuitous event occurs, you can take advantage of it.”

If you asked Dr. Bandura what he was most proud of, he always talked about what he hoped to pass on to students.  Once after we left a restaurant, a mother and her psych-major daughter chased after us to talk with him. Al delighted in this opportunity to speak with a psychology student!  Al’s final words to the student were: “Whatever you do with your psychology major, make sure you apply it to real life.” 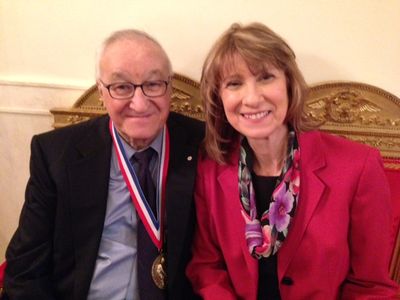 Al was extremely passionate about his latest book on moral agency and moral disengagement, which he completed at the age of 90! Truly a magnum opus, this powerful book explains how people can commit horrible acts and still live with themselves. I marvel at how he develops his theories and the mechanisms by which people selectively disengage from moral behavior. It’s a stunning, thought-provoking work that makes you examine some of the most important issues of our time, such as gun control and climate change. It transformed how I think about behaviors and collective disengagement in today’s world. Dr. Bandura knew that collective human agency and collective efficacy are needed to help save our planet and improve lives across the world.

As Dr. Bandura would say, may the efficacy force be with you.

Read more about his legacy at https://news.stanford.edu/2021/07/30/psychology-professor-albert-bandura-dead-95/