“It’s a lot of work to write a textbook,” said Jamie Pope, co-author of Scientific American Nutrition for a Changing World, “Much more work than popular press.” As the author of both popular science books and an award-winning textbook, Jamie would know. Writing a textbook isn’t easy. Not only do authors need to have a wealth of experience and expertise in their respective fields, but their writing also needs to pass a rigorous editing and review process.

Macmillan Learning recognizes that the success of our textbooks and courseware is in large part due to our outstanding authors, many of whom are distinguished professors and academics at some of the most reputable colleges, universities, and institutions around the world. Our authors have remarkable careers that extend far beyond higher education; they are excellent teachers; and they are impeccable writers and storytellers.

Students don’t often think about the authors of the textbooks with which they spend so much of their time. What if there were an opportunity to get to know these extraordinary authors, to learn about their lives, their backgrounds, and how they got to where they are today? Now there is with our Author Spotlight Series. Each month, we will feature a different Macmillan Learning author, and we’re beginning this month with Jamie Pope. 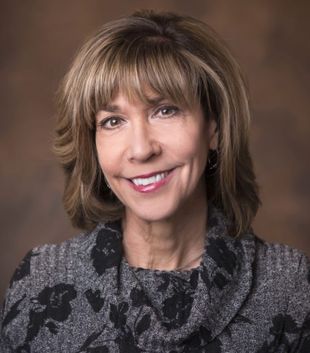 Jamie Pope, M.S., R.D.N., L.D.N., F.A.N.D., Vanderbilt UniversityThere was no grand plan for Jamie. She didn’t know growing up that she was going to study nutrition; work in a hospital as a registered dietitian; contribute to some of the most popular weight-loss and dieting books of the 80s and 90s; serve as a consultant and spokesperson for several large food companies; develop one of the most successful open, online nutrition courses; and write an award-winning textbook – to name but a few of her many career accolades and achievements.

So, how did Jamie first become interested in nutrition? When I asked her this question, she told me it’s a story she tells fairly often. Jamie went to an all girls high school that did not have a traditional cafeteria. There were vending machines with limited options but no robust “hot lunch” for the students. As part of an assignment for her English class, Jamie needed to conduct a survey, and that was when she first thought more about what everybody was eating for lunch. “The two most commonly consumed items were Cheetos and Milky Way candy bars,” Jamie told me. “At the time I wasn’t thinking too much about vitamins and minerals, but when I considered the implications of this simple survey it made me more aware of why food choice and balance might really matter.”

A couple of years later, when Jamie was flipping through the pages of her university course catalog, she remembered thinking she needed to choose a major. “I saw a course on vitamins and minerals and thought it sounded interesting,” she said. To Jamie it ended up being more than just interesting. She loved it, and decided to major in nutrition.

“From there I had sort of the traditional path of a registered dietitian, working in a hospital setting with patients,” Jamie said. She lived in Boston at the time, specializing in the area of heart disease and obesity. One day in 1986, when she was leaving the hospital to catch a flight back to her hometown of Nashville, the medical director stopped her and told her to reach out to Dr. Martin Katahn, a health psychologist at Vanderbilt University writing popular science diet books. Jamie described this as her entry into publishing.

Dr. Katahn had a lot of success. He was featured in People Magazine and appeared in many national talk shows, but Jamie noticed something missing from his team of researchers. “I couldn’t believe he didn’t have a dietitian on his team,” she said. “He was conducting all of this diet related work, but he didn’t have anybody with a nutrition background.” Soon after Jamie returned to Boston, Dr. Katahn asked her to come work with him at Vanderbilt, where she’s been located ever since.

Initially, Jamie was doing weight-loss research and consulted on some of Dr. Katahn’s books. One of these books was The T-Factor Diet, for which Jamie compiled an extensive appendix including thousands of foods with their grams of fats, calories, sodium, and other nutritional information. The book sold millions of copies and quickly became a bestseller. “One day,” Jamie said, “on a call with our publisher, they told me they wanted the appendix to be its own publication because so many people were copying it and carrying it around with them.” The little spin-off fat gram “counter” that she co-authored sold over seven million copies and spent more than three years on The New York Times bestseller list.

Jamie’s success with popular press opened the door to many opportunities. When I asked her about the most interesting roles she’s had, she told me about her time as a spokesperson or consultant for a few different food companies. “One of the fun things about my career were the media opportunities,” Jamie said. “I did a media tour with Chick-fil-A releasing their Gallup poll on fast food nutrition in the 90s. I’ve gone on book tours. I appeared on the Today Show a couple of times.” Chick-fil-A provided her with media training, where she learned media strategy and etiquette. “That was a lot of fun!”

“Getting to do those types of things was scary, but there was also always a lot of adrenaline pumping,” Jamie said as she reminisced about the different people she met during this part of her career. “I remember sitting in a green room and being interviewed by Katie Couric.” Jamie also did some consulting for Super Bakery, which was owned by Franco Harris. “Have you ever heard of him?” she asked me with a smile. Jamie admitted she’s not much of a football person, so she hadn’t recognized that he was a multiple-time Super Bowl winner with the Pittsburgh Steelers.

“One day I had to pick him up at the airport, and I thought his name was Frank O’Harris, not Franco Harris,” Jamie said. “I had a sign with his misspelled name on it and was looking for someone who I thought probably looked Irish,” she laughed. “All of a sudden he comes up and tells me ‘I think you might be looking for me.’” Franco thought it was funny, and Jamie’s brother, who is a football fan, couldn’t believe his sister had done that. Thereafter, when Franco would call, he would keep the joke alive and tell Jamie “Hey, this is Frank.”

In 2000, after gaining experience in research, publishing, media, and consulting, Jamie started teaching her introductory nutrition course at Vanderbilt University. “Out of all of the things I’ve done in my career, teaching is what I love most,” she said. Jamie doesn’t expect students to leave her course as nutrition experts. Instead, she described her course much like a music or art appreciation course. “When you take an art class,” she said, “you never walk into a museum the same way again. You look at things differently, you have new questions, and you have a greater appreciation for artists of all types.” She wants her students to appreciate the evolving science  of nutrition. “I want them to be better consumers and be equipped to better evaluate and question what they read or hear about food and nutrition in the media, from friends, and on food products.”

Writing a textbook gave Jamie an opportunity to reach even more students. Macmillan Learning approached Jamie in 2012 to ask her about the possibility of writing a textbook. She remembered wondering why the team was asking her, and they provided three reasons. “The first was that I had a publishing history. The second was that I had good reviews on Rate My Professors, which I thought was funny because at the time I had never heard of that before,” she said. Jamie then looked immediately afterward at the website. “And third, they told me that they heard good things about my introductory nutrition course at Vanderbilt.”

The same day Jamie agreed to write the textbook, she was boarding a plane back to Nashville from New York and received an email from her provost and dean at Vanderbilt. They asked her to teach one of Vanderbilt’s inaugural MOOCs (Massive Open Online Courses). Although feeling overwhelmed, she agreed to teach this MOOC, which aligned with her introductory nutrition course and involved creating course content, filming over 80 videos, and managing the course. “At first I thought maybe 300-400 people might enroll, but then it just kept growing!” she said. “Once we got over 50,000, I remember one of my colleagues telling me that we just filled Nissan Stadium.” The course was offered three times ultimately enrolling more than 175,000 participants from all over the world.

Jamie credits her career opportunities for providing her the experiences necessary to write a textbook. “My co-author, Steven Nizielski, and I make a good team,” she said. “Our textbook follows a story-based approach with science weaved into relevant stories.” Jamie said that what sets their book, Scientific American Nutrition for a Changing World, apart from others on the market is the fact that it’s written by two authors who bring different perspectives, allowing different types of readers to connect to the material. “As a registered dietitian nutritionist I bring my nutrition background and practical experience and Steven brings his nutrition and biochemistry expertise, so he provides much of our scientific backbone for the book,” she said.

While Jamie admitted that balanced, sound nutrition is part of how she lives her life, she loves to eat, experience new foods, and eschews restrictive “dieting”. “I made an incredible chocolate cake yesterday,” she said. “I love to bake, which doesn’t always go hand-in-hand with nutrition, but it's another form of creative expression for me.” She also enjoys long walks as her main form of exercise, and she listens to audiobooks on those walks; her favorite genre is historical fiction. She lives with her husband, her younger of two daughters, their big dog, Stanley, and their two cats.

Jamie Pope, M.S., R.D.N., L.D.N., F.A.N.D. currently serves as Adjunct Assistant Professor in Nutritional Sciences at Vanderbilt University, is a registered dietitian nutritionist, Fellow of the Academy of Nutrition and Dietetics, and academic author. Jamie came to Vanderbilt in 1986 and has worked in the areas of obesity research, health promotion, and heart disease prevention. Teaching since 2000, her popular classes have reached over 6,000 undergraduate students from a wide range of majors to learn about nutrition science and its application to their personal and professional lives. Beyond the classroom, Jamie adapted portions of her nutrition courses to produce a Massive Open Online Course or “MOOC” which earned her an Innovation in Teaching award from the Vanderbilt University School of Nursing. Jamie is the co-author of the award winning textbook Nutrition for a Changing World. Jamie is a recent recipient of the 2021 Outstanding Dietetics Educator Award from the Tennessee Academy of Nutrition and Dietetics and has served on the executive leadership committee for Nutrition Educators of Health Professionals Dietetic Practice Group. Jamie has authored or contributed to numerous scientific and popular press publications. She has held several corporate positions including at Chick Fil-A and Smart Balance, serving as nutrition consultant and media representative.