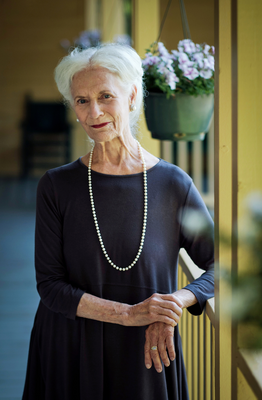 Andrea Lunsford, Louise Hewlett Nixon Professor, Emerita, Stanford University“Everything’s an argument,” says Andrea Lunsford, co-author of the eponymous book. If you disagree, she’ll ask you to provide her with an example. “What’s something that you don’t believe is an argument?” she’ll ask. Then she’ll argue that whatever example you provided is, indeed, an argument. She wins every time. She’s never yet been stumped.

“But, it’s not about winning,” she’ll tell you next. There are so many purposes for arguing, and winning is way down at the bottom of the list. Andrea will encourage you to think about the consequences of our arguments–what do we learn from arguments? “We also argue to explore,” she’ll say, “but mostly to understand things. Even meditation and prayer are forms of argument with oneself–to better understand oneself.”

This month’s Macmillan Learning Author Spotlight series features the co-author of Everything’s An Argument, Andrea Lunsford, who recently led a workshop titled “Teaching (Ethical) Argument Today” with our Bedford New Scholars. I met virtually with Andrea earlier this summer to learn more about her career as an educator and author, and to hear how retirement is treating her.

July 26, 2022 – It’s a beautiful midsummer Tuesday–depending on where you live. Even Americans’ favorite topic of smalltalk–the weather–is an argument. While large swaths of the country endure relentless heat, it’s pleasantly cool on the Northern California coast. Andrea spends this crisp morning harvesting vegetables from an organic community garden. Today she harvests broccolini, squash, and the first potatoes of the season. The members of the community call the garden “Posh Squash.”

Andrea works in the garden every Tuesday. Her shift begins at 8:30 in the morning and ends thirty minutes past noon. Though today she must cut that short. Her interview with me begins at one o’clock sharp, and she needs to rush home to freshen up.

She’s punctual, joining the call right on time. We spend the first few minutes discussing the pronunciation of our Germanic last names. We’re both fascinated with language. I learn that her niece-in-law speaks six languages, which provokes a short discussion about code-switching. I’ve the feeling we could spend hours talking about our mutual interests, but our time today is limited.

We begin discussing Andrea’s own education journey. Did she always know she wanted to be a teacher? When I ask her this, she tells me she was always an avid reader and writer as a young girl. “I used to make my brother and two sisters take lessons from me,” she says, “and when we went to the five-cent movies, I would make them walk in a line behind me,” she adds with a smile.

Growing up in a very segregated and restrictive society, Andrea learned early the liberatory potential of literacy. Born in Oklahoma, her family moved to Eastern Tennessee after her father was rejected from World War II because of his flat feet and poor eyesight. After he secured a job with an aircraft corporation and became an accountant, the family moved to St. Augustine, Florida.

“I couldn’t imagine going anywhere other than my state school,” Andrea says. So, she enrolled at the University of Florida, where she completed both her bachelors and masters degrees in English. While she was interested in pursuing her Ph.D., her advisor, whom she describes as an old, white man, told her that she should go home, get married, and have children. “At the time, I wasn’t offended,” Andrea says.

Andrea did go home after that, but she didn’t become a stay-at-home mother and housewife. Instead, she started teaching. “I taught every grade from seventh through twelfth,” she tells me. “Juniors and seniors were some of my favorite ages to teach,” she says, “though I liked teaching juniors a bit more because they aren’t yet jaded and don’t have senioritis,” she jokes. Andrea also believes that anyone who teaches middle school is a superhero. “Teaching seventh graders always felt like a battle; either they were going to kill me or me them,” she adds.

While continuing to teach high school English, Andrea also began teaching night classes at a community college. “It was then that I started to think more about my advisor telling me that I couldn’t get a Ph.D.,” she says, “and I started to become angry about it.” She started looking at schools, and decided to apply to The Ohio State University in order to study under Edward Patrick Joseph Corbett, author of Classical Rhetoric for the Modern Student. It was Corbett’s book that really sparked Andrea’s interest in the study of rhetoric.

After spending a short time on the waitlist, Andrea was admitted and arrived in Ohio in 1972. “This was during the height of significant political and social unrest,” she says. “There were many protests and conflicts, and the Kent State Killings were only two years prior.” It was this time of Andrea’s life that instilled an ongoing interest and enthusiasm for feminist scholarship and writing about women’s issues. “I’ve always wanted to teach young people how to speak and write with power–to have agency and take control of their own lives through discourse,” she says.

Andrea retired a few years ago, but she continues to speak to many students during virtual classes, conferences, webinars, and workshops. “What I miss most about teaching is the students,” she says. When I ask her about her experience with the Bedford New Scholars, she tells me she most loved hearing about their own work. “These students are working on exceptionally interesting projects and implementing really innovative teaching strategies.”

Students often have just as much to teach their teachers as the teachers have to teach them. Andrea shares with me a recent instance when a student really made her think. “I gave a talk at UC Irvine about writing style, and this young man asked me how he could make his sentences sing,” she says. “That was one of the best questions I have ever been asked. It’s certainly possible to make a sentence sing; we all know one when we see it.”

Andrea enjoys the stylistic part of writing, and she credits many women and especially women of color for creating more freedom in academic discourse. She quotes Maya Angelou, who said “I love a sentence,” and she tells me about Gloria Anzaldúa. “Gloria told me that early in her career she was strongly discouraged from genre mixing, which is something she became quite known for,” Andrea says. “She had an old, white male professor at the University of Texas who did then encourage her to write as she wished, and that gives me hope for the world.”

Writing Everything’s An Argument was one of the highlights of Andrea’s career. She tells me that her co-author, John J. Ruszkiewicz, had students that were complaining about their argument book, and so they decided to write their own. Their book is designed to help students understand and analyze the arguments around them as well as create their own. Sounds like a good skill to me since, as Andrea has now taught me, everything’s an argument.

Andrea tells me the most fun she had was developing the Hume Center for Speaking and Writing at Stanford University. There wasn’t an existing writing center when she first arrived at Stanford in 2000, and she didn’t want to institute a new curriculum without one. “We could make it however we wanted to,” she says enthusiastically. “But, we wanted it to first and foremost be a place for the celebration of writing.”

In the beginning, the center sponsored higher-level writing seminars that brought in a far larger audience than expected. “We learned quickly that we needed more room because so many people showed up,” she says. “Eventually, we started hosting writer’s nights, the Stanford Spoken Word Collective, tea parties for multilingual students, parents’ night during parents’ weekend, where parents and students could read together, music nights… everything you could think of!” 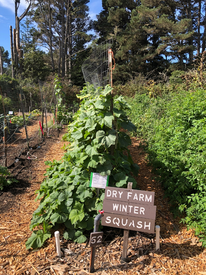 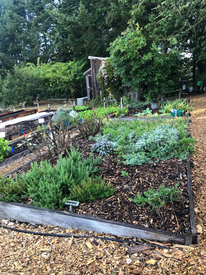 Andrea tells me how much she misses spending time at the center. She always used to conduct office hours there, and she tutored thousands of students during her time at Stanford. Nevertheless, retirement has certainly allowed her to pursue other hobbies and interests, including tending to the community garden.

Andrea stays plenty busy. She tells me she goes to the gym three times a week. “Though I’m not a regular gym rat,” she says. “I’m a gym swan because I don’t sweat,” she jokes. Her nephew will come for a visit later this afternoon. If the good weather holds, which it surely will, they may enjoy a walk along the beach.

Andrea's scholarly interests include the contributions of women and people of color to rhetorical history, theory, and practice; collaboration and collaborative writing, comics/graphic narratives; translanguaging and style, and technologies of writing. She has written or coauthored many books, including Essays on Classical Rhetoric and Modern Discourse; Singular Texts/Plural Authors: Perspectives on Collaborative Writing; and Reclaiming Rhetorica: Women in the History of Rhetoric, as well as numerous chapters and articles. For Bedford/St. Martin’s, she is the author of The St. Martin's Handbook, The Everyday Writer, and EasyWriter; the co-author (with John Ruszkiewicz) of Everything’s an Argument and (with John Ruszkiewicz and Keith Walters) of Everything’s an Argument with Readings; and the co-author (with Lisa Ede) of Writing Together: Collaboration in Theory and Practice. She is also a regular contributor to the Bits teaching blog on Bedford/St. Martin’s English Community site.