It’s the time of year when the leaves begin to change color, the air gets a little cooler and Americans celebrate their favorite pastime -- watching sports. Fans take to the stadiums and TVs to celebrate what’s been called the “holy trinity” of American sports: football, baseball and basketball. Yes, the Houston Astros winning the World Series ends baseball for the year. But we still have the National Basketball Association (NBA), National Football League (NFL), college football, and -- starting today -- women’s college basketball.

Sports is a big entertainment business in America, with a valuation of more than $80 billion in 2022 -- that’s more than the valuation of the film industry and more than double that of the music industry.  It may be much smaller than Wal-Mart, but when it comes to entertainment, sports triumphs over most everything. Within that, football is the top dog, with the NFL alone generating about $17 billion in revenue each year. But what is it that drives the economics behind sports? How do economic realities like scarcity, taxes, and spending impact their popularity?

With the end of the World Series, we spoke to David Berri, Professor of Economics at Southern Utah University and 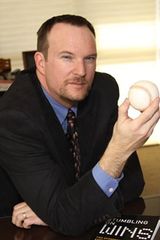 David Berri, Professor of Economics at Southern Utah University author of Sports Economics to better understand how market forces may impact America’s favorite pastime. So… is there a link between payroll and performance? Why are some sports more popular than others? As it turns out, not all sports are created equal. Here’s what Professor Berri has to say.

What role does economics play in the World Series?

In Sports Economics, we note that payroll does have a statistical link to team wins in Major League Baseball. But the link is somewhat weak. A team’s relative payroll (team payroll in a year relative to average payroll that year) only explains 16% of the variation in regular season winning percentage. And when we look at more recent data, we find exactly the same result. About 84% of the variation in team winning percentage is NOT explained by a team’s spending on talent. Rather, what players do on the field explains outcomes. The reason why salary doesn't explain pay is that teams can't predict performance (and there are impediments in the market). So we do know what explains outcomes after the fact.

Part of the reason for this outcome is that baseball has a number of restrictions on what some players can be paid (reverse order draft, a reserve clause for younger players, and a luxury tax on payrolls). But part of this is because baseball performance is not always easy to predict. Salaries are a statement about the future. And the future in baseball isn’t always known. For example, few would have guessed the Philadelphia Phillies – a team that wouldn’t even have been eligible for the playoffs last year – would be in the World Series!

Why does a regular season NFL game get more interest than a World Series baseball game?

The NFL generates about $17 billion in revenue. Major League Baseball’s revenue is about 60% to 70% of that total. So, one issue is baseball has a smaller fan base.

But it is also the case that given the violent nature of American football, the schedule length for the NFL is quite a bit smaller. An entire season is just 17 games. To put that in perspective, the Philadelphia Phillies will play at least 17 games in the postseason this year. And in 2020, both the Los Angeles Dodgers and Tampa Bay Rays played more than 17 games in the postseason.

The immense popularity of the NFL coupled with the scarcity of games likely combines to make a regular season NFL game more popular than a Major League Baseball playoff game.

Why is there such a discrepancy for women's sports as it relates to pay and interest?

This is an entire chapter in Sports Economics, and I am writing a book on this subject. Many people (mostly men) want to argue that the differences simply reflect “the market”. But as noted in the textbook, the changes we have seen in women’s sports across time are not simply due to market forces. In 1972, Title IX was signed into law. This dramatically changed opportunities -and participation – in girls and women sports. Prior to this act, girls and women simply weren’t given the opportunity to play sports. In fact, there is a long history of girls and women being explicitly banned from sports.

Beyond this history of discrimination, leagues like the NFL, NBA, and Major League Baseball receive billions of dollars in public subsidies. Even minor league baseball and soccer in the United States receive public subsidies. Women’s professional sports do not.

We should also not forget that the male dominated sports media primarily focuses its attention on men’s sports. Minor league football – which has never been successful in the United States – still receives an immense amount of media attention despite never being able to create a fanbase.

David Berri is a sports economist and professor of economics at Southern Utah University. In addition to his Sports Economics textbook (Macmillan Learning), he is also the lead author of two books—The Wages of Wins (with Martin Schmidt and Stacy Brook; Stanford University Press) and Stumbling on Wins (with Martin Schmidt; Financial Times Press) and has had more than 50 papers accepted and/or published in refereed journals. In addition, he has written for the New York Times, the Atlantic, Time, Forbes, and numerous other popular media outlets. Berri has also served as president of the North American Association of Sports Economics (NAASE) and currently sits on the editorial board of the Journal of Sports Economics and International Journal of Sport Finance (the two journals in sports economics).