Around the Changing World With Eric Chiang

Dr. Eric Chiang is no stranger to being online and in front of a camera. The Economics: Principles for a Changing World 6e author and instructor was a pioneer in online learning, bringing tech to teachers and students - an environment he was 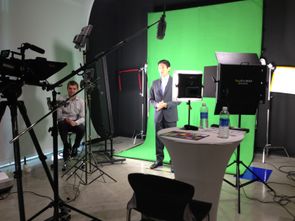 very familiar with well before virtual learning took over during the COVID-19 pandemic. In fact, his stint on the nationally televised show Holey Moley was when I first met him. Just as I was curious about his time on the show in 2019, I’m curious about what got him to that point.

At Macmillan Learning, we recognize that the success of our textbooks and courseware is in large part due to our outstanding authors. With this Author Spotlight series, we offer students and instructors a unique opportunity to better get to know these extraordinary authors, whose remarkable careers and interests often extend far beyond higher education.

There’s so much genuine interest and passion about the world’s economies within Dr. Chiang that helps make Principles for a Changing World the compelling text that it is. Within it, learners can hear his distinct voice speaking to them as they are introduced to economic concepts and the many unique examples from both within the United States and around the world.

Economics can be practical

Economics doesn’t have to be some pie-in-the-sky, impractical set of concepts. And Dr. Chiang doesn’t teach it that way because he didn’t learn it that way.

His journey into economics began when he was just a boy, with everyday lessons from his father, a chemist by trade, who had immigrated from Taiwan in the 1960s. While his father had always been interested in economics, he felt compelled to go with the trend of the time within the Taiwanese culture of coming to the United States and studying either engineering or the sciences. Despite that, his father never lost his interest in economics, and he began to teach Dr. Chiang the principles of it with practical life lessons -- how to be frugal with money, how to save money and how to invest money.

“He got me excited because he spoke about it in ways that made sense. Oh, we eat at Wendy's a lot, do you want to own a piece of Wendy's?” Dr. Chiang did want to invest and he saved his birthday money and allowances for some time so that he could invest $100. “He taught me about how companies make profits, how companies work -- and the fact that I owned just a few shares of Wendy's … it felt really exciting.” And it’s that same practical thinking that he uses to teach his students at Florida Atlantic University and the College of Southern Nevada.

His interest was further piqued when, in high school, he had the opportunity to take classes at Indiana University South Bend. “Everything I’d learned as a child just sort of formalized into these economic models.” And while he considered pursuing careers in his other interests during his undergraduate years of college, like geography or hotel management, he was always drawn back to economics. “Economics provided a foundation that allowed me to study many other subjects,” he explained with a smile. 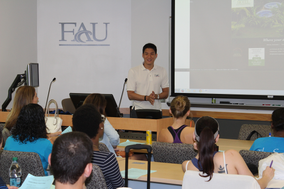 It was ultimately Game Theory, the study of how and why people make strategic decisions, that took him from the role of student to teacher. As a graduate student at the University of Florida (Go Gators) he was expected to teach an undergraduate class; he saw that Game Theory was an option in the catalog and decided to go for it. It was his first teaching experience, so he over-prepared his lectures, memorizing and scripting them. As it turns out, that wasn’t necessary. “As soon as I stepped into the classroom it became so natural, I absolutely fell in love with it. From that point on, I knew I was going to be a teacher because spending time with my students in the classroom was the highlight of my week.”

And while he loved teaching Game Theory, the topic proved to be a specialty and niche subject. So niche that he was having to come up with his own course materials for his students because there wasn’t much out there for him to use. “I wasn't satisfied with the existing textbooks at the time, so I was always using my own content.” And while he went on to customize chapters in other economics textbooks, something was still missing in those textbooks and, well, most others.

“One part missing in most books that I wanted was the story behind the concept. For example, most principles textbooks jump right into supply and demand, they jump right into elasticity, and they didn't really start the chapter with ‘Why is this important, and how is this relevant to everyone's life?’, and that was the part that I kept sort of filling in right when I customized the book.” And soon enough, he got the chance to write one on his own terms.

At first he began as an accuracy checker and reviewer of an economics textbook written by Jerry Stone, but quickly became more and more involved as a contributor. The two authors had a lot in common, with both Stone and Chiang teaching at public universities catering mostly to non-traditional students, who often took classes at night because they were working during the day or had families. Both believed in teaching practical, usable versions of economics -- Chiang understood just how valuable the students' time was and wanted to help them invest it in their future.

To do that, Stone and thereafter Chiang tailored the textbook to the needs of those students with the philosophy of being practical and connecting economics to the real world. “You have to be a little more thorough in your explanations, and you have to provide those additional explanations and examples and connect what we're learning to the real world.” That philosophy may be the reason why the largest population of students using the book are those from community colleges.

When Chiang began authoring the Principles for a Changing World textbook in 2014, he brought in a wealth of modern examples and global perspectives to create even stronger connections with the students. He also placed a greater emphasis on data literacy, all while still staying true to the original philosophy of being practical and connecting economics with the real world.

In writing, he made sure that the text attempted to make connections with every student by offering examples from across 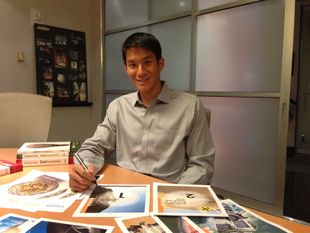 various regions of the US and even the world. “Take, for example, sports. We’re not just talking about baseball and football in the examples. We’re also talking about cricket, soccer and field hockey. That makes it more relatable.”

Chiang is passionate about international travel and culture, which is evident throughout the textbook. Every chapter of the book has an “around the world” feature, offering a different way to think about economics. “If you look at most other textbooks, if they're talking about something in another country, it is because they're comparing their country with our country. It’s their growth rate vs. ours. For me it's more from an individual perspective -- if you were standing in that country, how would someone in that country solve a problem?”

Take, for example, Disneyland in Tokyo. It’s quite different from the Disney World or Disneyland that students in the U.S. are used to. Culturally, in Japan, they are not as interested in thrill rides, like roller coasters, but they love photo taking. “Line management in dealing with scarcity and surplus is different in Japan. The park is so crowded but everyone's having a great time because there's so many characters walking around, and you can always take a picture with them and it's a very fulfilling experience …It's just interesting to see how different countries address different demands, and different cultural differences of what people value and that goes into their decision making. It all goes to show there’s not just one way to solve an economic problem.”

Growing up, Chiang never traveled far from his Indiana hometown. So as an adult he makes up for it by trying to visit a new country every year. He wants to bring new examples, ideas and stories to his students, which is how he came up with the idea of his Around the world in 80 hours series which is “a fun way to show the class how economics is all around the world.” I asked him about his favorite spots and he mentioned Japan and Singapore. Although he tends to stay a very short time in each country, his reasoning is that there’s around 200 countries in the world, so he’d like to have a glimpse of as many countries as possible -- his face lights up just thinking about it.

His most striking economic lesson was when he traveled to Bhutan, a small agricultural Kingdom in the Himalayas. 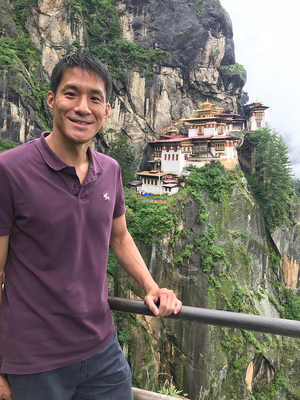 According to Chiang, while it’s not modern (he did not see a single traffic light in the entire country), it’s one of the safest, healthiest and happiest places in the world. “You know they don't have much, but they live very, very well so to me that's a striking economic example.”

“The government doesn't measure their well-being through gross domestic product, which is how every other country measures the size of their country.” Rather, Bhutan has a Gross National Happiness Index comprising of nine domains that include psychological well-being, health, education and good governance, among others. “I think Bhutan offers an example of the opposite of what we think of as societal norms - you don't have to have money or lots of possessions, but you have to have community. And that’s a different way of thinking about the health of a country and its economic well-being.”

And that’s what makes Bhutan Bhutan. And what makes each student their own person as well, which is why it’s so important that diversity is not only recognized, but championed.

“Everyone faces different circumstances and manages resources differently, and that's what economics is about. How you manage your money and your time is different from how I do it. A lot of it's based on our circumstances and values, and how we grew up, and that's based on cultural diversity,” Chiang said. Students growing up in a small town have vastly different experiences than students growing up in an agricultural community, which differs vastly from those in a large city. And that’s just taking into account population size, let alone ethnicity, background, gender or income, among other factors.

And that’s true for the world around us, for our classrooms and also for our textbooks. “In the past century there have been so many prominent economists and Nobel Prize winners that are women and people of color, and we highlight the biographies of many of these important contributors to economics,” Chiang noted. He cited Cecilia Rouse and Phyllis Wallace as examples. He further explained, “People always talk about prominent macroeconomist Milton Friedman, but actually he worked most of his life with Anna Schwartz, who was equally deserving of the Nobel Prize.”

Dr. Chiang just finished writing the sixth edition Economics: Principles for a Changing World and notes that it will offer the practical and relevant content that’s been counted on for many years as well as fantastic new features like interactive graphing. But this new edition will offer even more information about diverse economists like Rouse and Wallace and how their contributions have affected our everyday lives -- including the economic decisions we make today. It will also include more stories, just like the Gross National Happiness Index from Bhutan that help students understand different ways of thinking about economics. Until then, you can find Dr. Chiang at FAU, UCS, or somewhere at cruising altitude.