A Community of Voters

Did you know September 28 is National Voter Registration Day? Since 2012, the fourth Tuesday in September is observed as a nonpartisan civic holiday focused on registering eligible Americans to vote. Since its inception, nearly 4.5 million voters across all 50 states have registered to vote on this day, including 1.5 million just in 2020.

I registered to vote in 1995 at the DMV, thanks to the National Voter Registration Act of 1993 (a.k.a. the Motor Voter Act), which went into effect in January of 1995. It's likely I was not aware of this legislation at the time, only that registering to vote was simple and easy. I cast my first ballot in the 1996 presidential election, finally becoming part of the community of voters—across my city, state, and country—making our voices heard.

My eagerness to register to vote was a result of having parents who modeled voting and civic engagement, and being a teenager during the inception of Rock the Vote, a nonpartisan nonprofit that expertly wielded the power of MTV and celebrity to get young voters to the polls. It was also a result of privilege; it never occurred to me that I wouldn't be able to vote, and I had access to every resource to ensure I could register and get to the polls. Evidence of parental influence can be seen in this newspaper clipping from 1984, in which my mother (then 34 years old) was photographed registering to vote at a table outside a Publix grocery store in Naples, Florida: 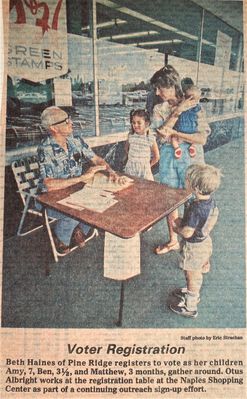 The gentleman sitting at the table, Otus Albright, was doing his part to grow the community of voters in his city. Because at its core, that’s what voting is—an act of community. Yes, you are using your individual voice in the voting booth, but you are doing so alongside your fellow voters. You are saying this community, this country, is one worth participating in. Or, as writer Sharon Salzberg puts it, you are committing: “Voting is the expression of our commitment to ourselves, one another, this country and this world.”

Who will you encourage to become part of the community of voters? A colleague, neighbor, student, friend, relative? What can you do to work toward voting access for all in your community? How can you model the vital importance of committing to each other with this act of civic engagement? When in doubt, share your own voting story!

The National Voter Registration Day website is loaded with resources for potential voters and volunteers who want to help people get registered.

Other posts you might like:
Reading, Writing, Voting: A Rhetorical Education by Susan Bernstein
Argument and Our Students' Future by Donna Winchell