So What's With Woody Allen? 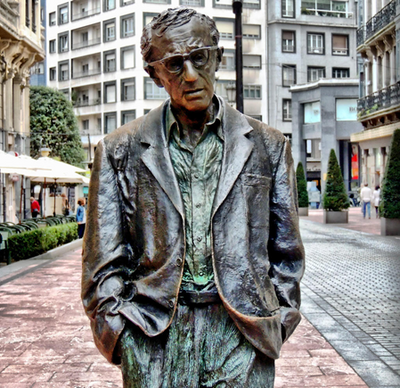 Let me begin by saying that I have no intention of entering into the murky morass that engulfs the many conflicting claims behind HBO's recently aired documentary, "Allen v. Farrow." What interests me, for the purposes of a cultural semiotic analysis, lies not in the series itself, nor its subject matter, but rather in the reaction to it, particularly the passionate defense of Woody Allen that has sprung up in its wake. Lorraine Ali of the Los Angeles Times describes this reaction in her article "What Woody Allen’s defenders are really upset about," as follows:

Angry readers wrote to The Times in response to my favorable review of the series, insisting I was part of a lynch mob: "Shame on you!" Others railed against it on Twitter as an HBO hit piece. Heated arguments ensued across Facebook. Some of the upset was understandable: Robert Weide, who directed "American Masters — Woody Allen: A Documentary," spoke out in favor of his friend, complaining in a blog post that most of the press was guilty of "swallowing the HBO series whole, seemingly thrilled that someone was finally taking Allen down." But the immediacy and intensity of the response by those who presumably don’t know Allen personally are puzzling. His apex as a filmmaker was more than 30 years ago. The accusations detailed in "Allen v. Farrow" are nearly as old. Why are these fans so invested in defending him?

Good question, and Ali's situating it within the context of a world that "has changed since the scandal around Allen and Farrow’s breakup in 1992, and even more since the 1970s and ’80s, when Allen’s films often seemed to be driven by an obsession with young — and occasionally underage — women," is a good place to start. For indeed, as Ali continues, "the #MeToo movement has shifted the power dynamics of Hollywood, and changed the perceptions of the American public regarding the role of women on and off screen. But more than that, it’s flipped the script on who is believed in 'he said, she said' cases, making Allen and Farrow’s case the perfect candidate for reconsideration under a more modern cultural lens."

But as is so often the case in the highly overdetermined world of popular cultural semiotics, I think there is another angle to the story that is worth exploring. So here goes.

In my last blog I celebrated the life of the late Lawrence Ferlinghetti, who, I noted, was a major contributor to America's mid-twentieth century's deconstruction of the traditional boundary between elite and mass culture, incorporating elements of popular entertainment into his own esthetically-driven poetry while encouraging and publishing the work of other poets (like Allen Ginsberg) who were also straddling the line between art and pop. So I find it striking that when I look at the career of Woody Allen I see something of the same phenomenon, but moving from the opposite direction—that is, from pop to art, with the television joke writer and stand-up comedian of the 1950s and '60s becoming the cosmopolitan auteur of the 1970s and onward. And herein lies one of the reasons for the angry defense of Allen today that Ali describes.

At a time when movie genres that were once regarded as being properly for children—science fiction and fantasy, with their vampires, wizards, zombies, star ships, and superheroes—have taken center stage in America and shoved the art film tradition into the wings, Woody Allen can be (and, I believe, is being) seen as one of the last exemplars of the high art, urbane and sophisticated, cinematic tradition. An attack on the man thus feels like an attack on what he represents to his defenders, and they are responding accordingly.

So I don't think that the shifts in gender power relations that Ali identifies are the sole motivation for Allen's defenders—that they are trying to hold onto a bygone era of all-powerful Hollywood men. The bygone era behind the ruckus is cultural as well as political, and it will be interesting to see what happens next in this ongoing family melodrama.