A Coney Island of a Life 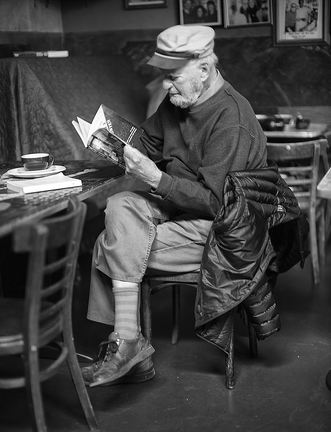 So Lawrence Ferlinghetti, the Beat world's true renaissance man—best-selling poet, publishing entrepreneur, and literary impresario supreme—is gone, having shown the world that you can sail the drunken boat without destroying yourself on the journey and have a whale of a good time besides. And while posterity seems to prefer the poet maudits—the Rimbauds and Kerouacs and Morrisons—who crash upon the shoals of Romantic excess, I can't help but think that it is the Ferlinghettis who have really mastered the game of life—not to mention the Gary Snyders, who are still around to show the way.

But what has any of this to do with popular cultural semiotics? Actually, quite a lot, because it was Ferlinghetti, along with Allen Ginsberg, Roy Lichtenstein, Andy Warhol, Bob Dylan, and a good many others from the world of mid-twentieth-century art whose names I don't have room for here, who led the way in the deconstruction of the traditional boundary between high and popular culture that is so easily taken for granted today. Before there were poetry slams, there was Ginsberg, dragging poetry out of the seminar rooms and turning it into performance art. Before there were graphic novels, there were Lichtenstein's cartoon canvases and Warhol's Pop posters; and when Dylan plugged it in, rock met poetic rhyme, even as the Beatles were importing string quartets into teenaged love tracks. So when we consider how Stan Lee's comic books have come to attain the cultural stature once commanded by high lit (how Lee must have enjoyed seeing his Black Panther become a kind of Prince Harry to Killmonger's Hotspur!), it is to artists like Ferlinghetti that we must turn to understand how it all happened.

There is a flip side to this history the mid-twentieth-century art rebels did not intend, however, for they wanted to open up high culture, not abolish it, to extend its boundaries, not erase it. But when the line between the fine arts and the commercial ones got blurred, it was commerce that eventually won out. Driven by the capitalist imperative to entertain, artistic creativity today is dominated by those productions that can command the largest audiences. With high art driven back into the museums (where it subsists on a kind of life support provided by a dwindling number of rich patrons and private foundations), there effectively is no high culture/pop culture divide any more. What we have now is an all-encompassing entertainment culture driven by the mandates of the market.

As I say, this isn't what Lawrence Ferlinghetti envisioned when his Coney Island of the Mind became that rarest of poetic fauna: a full-fledged best-seller. But as another poet who once brought "high" culture and "low" together has put it, “The best laid schemes o' Mice an' Men, Gang aft agley."

"Lawrence Ferlinghetti" by Christopher.Michel is licensed under CC BY 2.0