The Sounds of Silence

My brain—and yours—is blessed with neuroplasticity. More than other species’ brains, ours can adapt by reorganizing after damage or by building new experience-based pathways. Although neuroplasticity is greatest in childhood, adult brains also change with experience. Master pianists, ballerinas, and jugglers have enlarged brain networks that manifest their acquired knowledge and skills.

Brain plasticity is also at work in those of us who experience a new world of sound, enabled by a cochlear implant (CI). For many, the initial result of CI activation is underwhelming—squeaky high-pitched sounds rather than understood speech—followed by several months of gradually increasing voice comprehension as the brain adapts.

Recalibrating voices. My immediate response to CI activation was happily more rewarding. “What is your middle name?” I heard the audiologist ask my previously deaf ear (reminding me of Alexander Graham Bell’s first telephone words: “Mr. Watson—come here—I want to see you”). To be sure, her words were barely—and not always—discernible. And they came with the squeaky voice of the little girl who had seemingly occupied her body. But now my plastic brain had something to work on.

The ENT surgeon attributed the high-pitched voice to implant’s disproportionately high-pitched stimulation. (The cochlear wire only reaches through about 1.5 of the cochlea’s 2.5 turns—its high-frequency region—beyond which the electrodes would need to be so close that they would interfere with each other.) But with time, I am assured, my brain will recalibrate, and already that's happening. 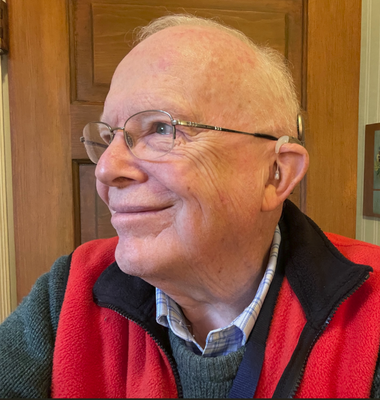 Aural rehabilitation. As pianists, ballerinas, and jugglers can train their plastic brains, so too those experiencing disabilities can, to some extent, retrain their brains. By prescribing a stroke patient to use only the “bad” hand or leg—constraint-induced therapy, it’s called—dexterity will often increase. One person who had been partially paralyzed by a stroke gradually learned, by cleaning tables with their good hand restrained, to write again and even play tennis with the affected hand.

Ditto for CI recipients, who are told to anticipate up to a year of gradually improving speech perception as their plastic brain adjusts to the new input. To assist that process, I am advised to dedicate time each day to watching captioned TV, or listening to speech with just the CI. If needed, recipients can also undergo word-recognition training.

Happily, I seem not to need word training. Within the first week of receiving the CI’s input, some adaption was already evident, with speech becoming increasingly intelligible. Even with the hearing aid in my other ear replaced with an earplug, I can, in a quiet room, converse with someone via the CI alone. And with the enhanced binaural hearing I can again attend department meetings and chat with folks amid a coffee hour.

I also seemingly benefit from a curious phenomenon of auditory selective attention. I can listen to what sounds like a) squeaky voices with my left, CI-assisted ear, b) normal voices with my right, hearing-aid assisted ear, or c) the improved hearing from both inputs combined—yet with normal voice perception predominating. Moreover, I am experiencing . . .

What strange CI powers are these . . . to cause previously silent objects to make sound!

Honestly, however, I am awestruck by those of you with normal hearing. You swim amid an ocean of inescapable sound, yet somehow manage, without constant distraction, to filter and attend to pertinent sounds, such as one particular voice. You are amazing.

But then for us all, hearing is a  wonder. Imagine a science fiction novel in which alien creatures transferred thoughts from one head to another by pulsating air molecules.

That is us! As we converse, we are—in ways we don’t comprehend—converting what’s in our mind into vocal apparatus vibrations that send air molecules bumping through space, creating waves of compressed and expanded air. On reaching our recipient’s eardrums, the resulting vibrations jiggle the middle ear bones, triggering fluid waves down the adjacent cochlea. These bend the hair cell receptors, which trigger neural impulses up the auditory nerve to our brain—which somehow decodes the pulsations into meaning.

From mind to air pressure waves to mechanical waves to fluid waves to electrochemical waves to mind, we communicate. Mind-to-mind communication via jostling air molecules: As the Psalmist exclaimed, we are “wonderfully made.”

(For David Myers’ other essays on psychological science and everyday life, visit TalkPsych.com or his new essay collection, How Do We Know Ourselves: Curiosities and Marvels of the Human Mind. Follow him on Twitter: @davidgmyers.)