The Health and Well-Being of America’s Youth

Since 1991, through its school-based surveys of 4.9 million high school students, the Centers for Disease Control and Prevention (CDC) has monitored the health and well-being of America’s youth. Its Youth Risk Behavior Surveillance System monitors trends in adolescent risky behaviors, sexuality, mental health, drug and alcohol use, exercise, and diet.

The 2019 survey, released in late August of 2020, includes these findings of possible interest to teachers, counselors, parents, and others who support or nurture America’s youth:

Sexual identity. Two percent of boys and 3 percent of girls report being gay or lesbian. But more report being bisexual or unsure. This is especially so for girls: Nearly 20 percent identify as neither straight nor gay, which accords with other studies that find women’s sexual identity less fixed than men’s.

Sexual identity and victimization. It’s often presumed that gay and lesbian teens are vulnerable to becoming victims of antisocial acts, and the CDC survey confirms that presumption. Gay and lesbian youth are twice as likely as straight youth to report feeling unsafe, being bullied, and experiencing violence directed against them. They also are 3.6 times more likely to report experiencing persistent feelings of sadness or hopelessness, and 4.5 times more likely to have “seriously considered attempting suicide” in the past 12 months.

Sexual activity. The long-term decline in teen sexual intercourse has continued. Psychologist Jean Twenge, also following this trend, has attributed it to the smartphone generation’s diminishing face-to-face relationships. Of those sexually active, 23 percent reported using oral contraceptives and 54 percent reported using condoms during their last sexual intercourse, with 9 percent using both (or some other accompanying birth control device).

Suicidal thoughts and attempts. High school students’ contemplating or attempting suicide has increased since 2009. Moreover, both depression and suicide attempts are twice as likely among teen girls compared with teen boys. 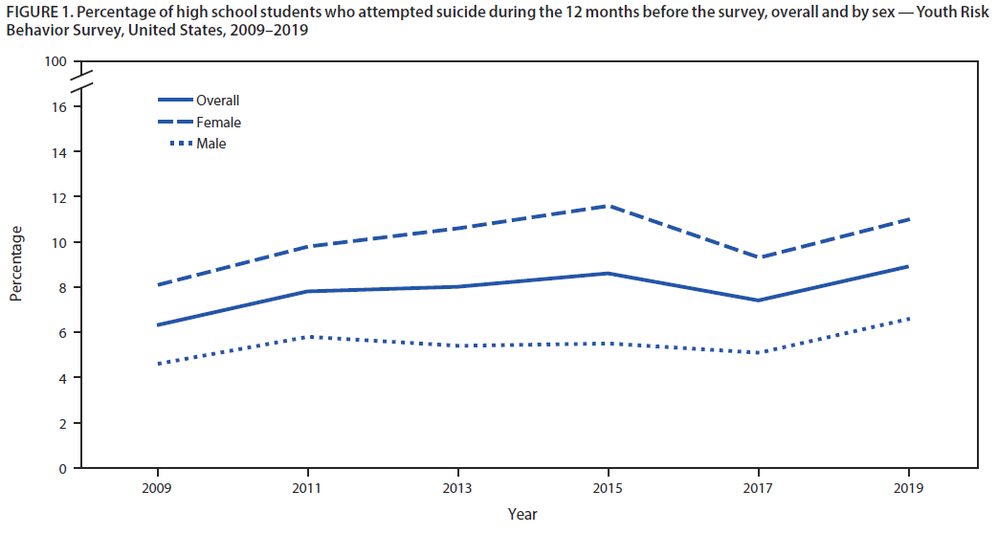 The rising depression rates coincide with another government national youth survey that reported a marked increase in teen rates of major depressive disorder since 2010. In this 2018 survey, too, the percent of teens feeling “sad or hopeless” had increased from 26 to 37 percent since 2009.

Might the concurrent rise of smartphones and social media be contributing to these increasing rates? For my quick synopsis of the pertinent evidence see here.

Drug and alcohol use. Since 2009, teens’ marijuana use has been stable—though with an uptick from 20 to 22 percent since 2017, coincident with widespread legalization in the United States. Daily cigarette smoking has dramatically declined, to the point of becoming gauche:

But vaping has replaced cigarette use, with one-third reporting having vaped at least once in the past month, and 1 in 10 doing so most days. (In a separate survey of college age people, both  nicotine and marijuana vaping increased from 2017 to 2019.) However, a brand new government report indicates that, thanks to health warnings, youth vaping dropped by 30 percent in 2020.

Other tidbits from the CDC survey:

To view and capture simple graphs on these and other health indicators—and perhaps to create a quiz that challenges your students to guess the answers—visit here.