My Home Island: Ground Zero for Anti-Asian Prejudice, and Its Repudiation

In the United States, anti-Asian prejudice has resurged, with nearly 6,600 hate incidents against Asian Americans and Pacific Islanders (AAPIs) recorded during the COVID-19 pandemic’s first year. Reports of harassment, vandalism, and brutal attacks on Asian Americans, from the very young to the very elderly, have made one-third of Asian Americans fear for their safety. An Asian-American friend last week recounted his fearful father getting a gun for self-protection.

Women and girls reportedly endured two-thirds of these hostilities, including the horrific March, 2021 Atlanta shooting spree that claimed the lives of eight people—six of them Asian American women. One in four AAPI-owned small businesses has also faced pandemic-related anti-Asian words or acts.

Today’s bigotry extends a long history, beginning with the 20th century’s ground zero event of anti-Asian prejudice: the World War II internment of 120,000 West Coast people of Japanese descent. As I have explained here and here, it was on my home island—Bainbridge Island, near Seattle—that the relocation and incarceration of Japanese Americans began. With only six days’ notice, Exclusion Order #1 ordered the evacuation of the island’s 276 Japanese American residents, each lugging nothing more than they could carry. (One government concern: The island’s south end overlooked a narrow passage to a naval shipyard and submarine base.)

Today, that March 30, 1942 ferry departure point is the site of a national “Japanese American Exclusion Memorial.” On each visit home to Bainbridge, I return to the memorial, where a 276-foot wall with wood sculptures tells parts of the story. 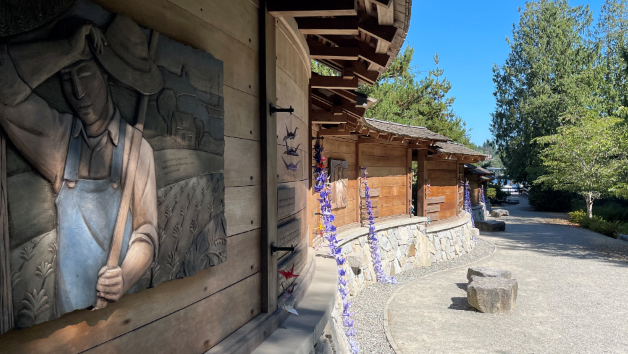 As my insurance agent father would later recall, it was a devastating day as the islanders bid farewell to their neighbors. His autobiography recalls the sadness, and also the lingering discrimination:

“We had many Japanese friends and it was heartbreaking for us when the war started and the Japanese people on Bainbridge Island were ordered into concentration camps. . . . Most were educated here on the island [and] it was hard to believe that they were not as loyal Americans as we.

I did all I could to keep the insurance on their homes in force. . . . The insurance companies that I represented were a bit prejudiced against insuring the Japanese people, particularly for liability insurance, for fear that lawsuits would be brought against them and the juries, being Caucasian, might be prejudiced in their jury awards.

[One post-war returnee, wanting insurance on a car] named his four brothers and recited how all five of them had been in one or another of the American armed forces and had served in Italy, France, Germany and Japan. [When I showed the letter to the insurance manager] she said G___ D___ you, Ken Myers, for bringing me this letter. How can I say, ‘No’? So she wrote the first policy on a Japanese American after the war.”

In contrast to the media-fomented bigotry that greeted other West Coast internees on their post-war return home, the Bainbridge internees were welcomed back by most. On my recent visit to the Memorial, I chanced to meet internee Lilly Kodama recalling her experience, as a seven-year-old, of being abruptly taken from her world. She presumed she was going with her family on a shopping trip, and was surprised to find her cousins and neighbors on the dock. But Kodama also spoke of the support of fellow islanders, including my father, but especially Walt and Millie Woodward, the heroic local newspaper owners who challenged the internment and then published news from the camps. 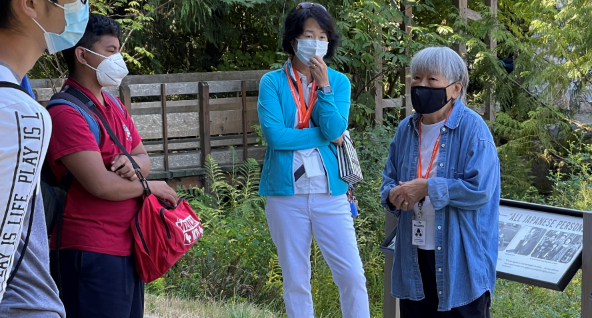 On high-contact Bainbridge, islanders intermingled as school classmates (as illustrated in this 1935 elementary school picture). Their homes, strawberry farms, and businesses were dispersed. In their absence, thirteen empty chairs were on stage at a high school graduation so all would remember who was missing. Internees returning after the war were greeted with food and assistance. Cooperative contact enabled minimal prejudice.

This real-life social experiment has been replicated in our own time: People in states with the least immigrant contact express the most anti-immigrant antipathy, while those who know immigrants as neighbors, classmates, or fellow workers more often profess a welcoming attitude.

Amid the anti-Asian prejudice of 2021, how can we replace incidents of closed fists and tight jaws with open arms? We can seek and facilitate intergroup contacts. We can travel and experience other cultures. We can welcome diversity into our communities and workplaces. We can challenge slurs. We can educate ourselves and others about our culture’s history. In such ways we can affirm the memorial’s closing words: