Marshmallows and the Politics of Climate Care

“The best time to plant a tree was 20 years ago. The second-best time is now.”
~ Anonymous proverb

Character education’s greatest task is instilling a mark of maturity: the willingness to delay gratification. In many studies, those who learn to restrain their impulses—by electing larger-later rather than smaller-now rewards—have gone on to become more socially responsible, academically successful, and vocationally productive. The ability to delay gratification, to live with one eye on the future, also helps protect people from the ravages of gambling, delinquency, and substance abuse.

In one of psychology’s famous experiments, Walter Mischel gave 4-year-olds a choice between one marshmallow now, or two marshmallows a few minutes later. Those who chose two later marshmallows went on to have higher college graduation rates and incomes, and fewer addiction problems. Although a recent replication found a more modest effect, the bottom line remains: Life successes grow from the ability to resist small pleasures now in favor of greater pleasures later. Marshmallows—and much more—come to those who wait.

The marshmallow choice parallels a much bigger societal choice: Should we prioritize today, with policies that keep energy prices and taxes low? Or should we prioritize the future, by investing now to spare us and our descendants the costs of climate change destruction?

“Inflation is absolutely killing many, many people,” said U.S. Senator Joe Manchin, in explaining his wariness of raising taxes to fund climate mitigation. Manchin spoke for 50 fellow senators in prioritizing the present. When asked to pay more now to incentivize electric vehicles and fund clean energy, their answer, on behalf of many of their constituents, is no.

But might the cost of inaction be greater? The White House Office of Management and Budget projects an eventual $2 trillion annual federal budget cost of unchecked climate change. If, as predicted, climate warming increases extreme weather disasters, if tax revenues shrink with the economy’s anticipated contraction, and if infrastructure and ecosystem costs soar, then are we being penny-wise and pound-foolish? With the worst yet to come, weather and climate disasters have already cost the U.S. a trillion dollars over the past decade, with the total rising year by year. 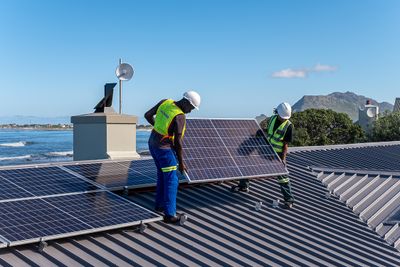 The insurance giant Swiss Re also foresees a $23 trillion global economy cost by 2050 if governments do not act now. The Big 4 accounting firm Deloitte is even more apprehensive, projecting a $178 trillion global cost by 2070.

What do you think: Are our politicians—by seizing today’s single economic marshmallow—displaying a mark of immaturity: the inability to delay gratification for tomorrow’s greater good?

A related phenomenon, temporal discounting, also steers their political judgments. Even mature adults tend to discount the future by valuing today’s rewards—by preferring, say, a dollar today over $1.10 in a month. Financial advisors therefore plead with their clients to do what people are not disposed to do . . . to think long-term—to capitalize on the power of compounding by investing in their future.

Alas, most of us—and our governments—are financially nearsighted. We prioritize present circumstances over our, and our children’s, future. And so we defend our current lifestyle by opposing increased gas taxes and clean-energy mandates. The western U.S. may be drying up, sea water creeping into Miami streets, and glaciers and polar ice retreating, but even so, only “1 percent of voters in a recent New York Times/Siena College poll named climate change as the most important issue facing the country, far behind worries about inflation and the economy.”

The best time to plant a tree, or to have invested in climate protection, was 20 years ago. The worst time is 20 years from now, when severe climate destruction will be staring us in the eye.