How We Polarize, and What We Can Do About It 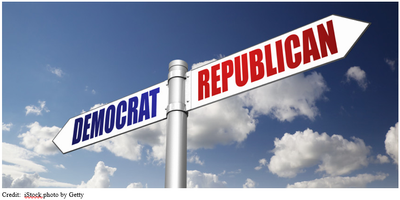 Red and blue partisans alike are aghast at what others revere. As one incredulous friend recently said of his family, “I can't believe that I personally know people who are so foolish.” This divided family is not alone. The percentage of both Republicans and Democrats who “hate” the other party soared from 20 percent in 2000 to near 50 percent in 2016. Would you be unhappy if your child married someone from the other party? From 1960 to 2019, the percent of folks answering “yes” shot up from 4 to 40 percent.

What psychological forces are driving and sustaining our great and growing divide? As I’ve mentioned in prior essays, belief perseverance solidifies ideas when personal explanations of why they might be true outlast the discrediting of evidence that inspired them. Motivated reasoning justifies what we already believe or want to believe. And confirmation bias sustains our beliefs as we seek belief-confirming evidence.

There is also a powerful fourth phenomenon at work: group polarization, which further amplifies the shared views of like-minded folks. When like minds discuss, their attitudes often become more extreme. 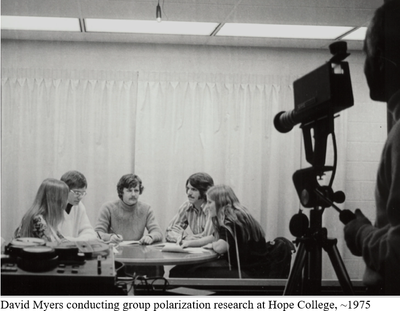 Long ago, George Bishop and I invited high-prejudice students to discuss racial issues with others (who, unknown to them, were of like mind). We did the same with low-prejudice students. As we reported in Science, the result was group polarization: The divide between the two groups grew. Separation + conversation = polarization (see Figure 1). 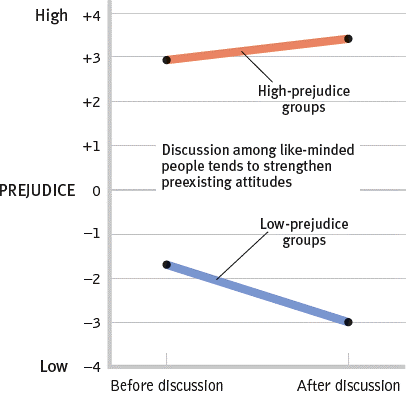 The phenomenon can work for good—as peacemakers, hunger advocates, and Black Lives Matter activists gain strength from connecting with kindred spirits. Or it can be toxic, as like minds amplify bigotry, intensify conspiracy paranoia, and inspire terrorism.

The internet. One, obviously, is 21st-century social media. Trump supporters connect with fellow Trump supporters in disparaging those whom they despise. Progressives friend progressives who similarly affirm their shared views. The end result? Differences escalate to demonization. Partisanship becomes tribalism.

Partisan cable TV. But the internet is far from the whole story, because polarization has deepened even among those least likely to use it. The soil that nourishes polarization also includes today’s politicized cable television options. In the past, a handful of mainstream news sources fed us all. Today, we can choose like-minded news—think Fox and MSNBC evening talk shows, and the recently Trump-championed Newsmax and OAN—that reinforces our existing views.

The geography of division. There is also a third and less obvious social phenomenon at work. In a contest between proverbs—do “opposites attract,” or do “birds of a feather flock together”?—one of social psychology’s oldest and most firmly established principles is that similarity attracts.

Opposites attracting can make for a good story: think Frog and Toad. Or: “I’m Aquarius—decisive. He’s Libra—indecisive. We complement each other with so little conflict, because he’s happy when I make the arrangements.”

But in reality, people are drawn to those with whom they share attitudes, beliefs, interests, age, religion, education, intelligence, economic status . . . the list goes on. We could wish it were otherwise, because there are benefits to diversity in neighborhoods and work teams. Yet birds who flock together—rich birds, tall birds, pretty birds, smoker birds, evangelical birds—typically are of a feather. Likeness leads to liking. Similarity breeds content.

And that helps explain why, in an age of increased mobility (we more often live at some distance from our original home), our internet/TV social bubbles are compounded by geographic bubbles, where people live among other like-minded folks. Blue counties have become a deeper blue, and red counties a brighter red. As Philip Bump reports, the Democratic presidential candidate’s margin in Democratic-voting counties increased from an average 15 percent in 2000 to 23 percent in 2020, while the average Republican candidate’s margin in Republican-voting counties increased from 26 to 43 percent. Whether you live in rural Wyoming or in central Seattle, just about everyone you meet likely thinks like you do.

This increasing geographical segregation of like minds helps explain the astounding result of a September, 2020, Pew survey: Four in ten Biden and Trump supporters said they did “not have a single close friend” who supported the other candidate. As I am, so are my friends.

When COVID-19 is defeated, our world will be left with mammoth challenges: preventing a climate apocalypse, reducing systemic racism and hyper-inequality, and also building bridges of understanding across our partisan chasm. For better and for worse, the internet, cable television, and geographic mobility will endure. So how might we depolarize?

Citizen initiatives can engage dialogue. Nonprofit organizations working to depolarize America include Living Room Conversation, the Civil Conversations Project, the Depolarization Project, and Braver Angels, which is bringing red and blue together “to understand the other side’s point of view . . . to look for common ground . . . and to support principles that bring us together rather than divide us.” For some specific policies, such as higher taxes on the super-rich, net neutrality, and a $15 minimum wage, there already is bipartisan supermajority support.

Educators can advance understanding. One overarching purpose of education is to counter the power of repeated misinformation and “anecdata” by teaching evidence-based critical thinking. Education can also work at enabling people, even when disagreeing, to understand others’ perspectives. It can train intellectual humility (“What’s the weakest part of my argument? What’s the strongest part of my opponent’s argument?”). And, with our attention so often drawn to how we differ, educators can teach listening skills that enable us to appreciate our shared concerns and values. For superb, evidence-based, ready-to-use online pedagogy, see www.OpenMindPlatform.org.

The utopian goal is not a Nineteen Eighty-Four-like uniformity of public opinion. Rather, our challenge is to affirm both our diversity and our unifying ideals, and so to renew the founding idea of America: diversity within unity. E pluribus unum: Out of many, one.