How Many Friends Do You Have?

Friends matter. If psychological science has proven anything, it’s that feeling liked, supported, and encouraged by close friends and family fosters health and happiness. Having friends to confide in calms us, enables better sleep, reduces blood pressure, and even boosts immune functioning. Compared with socially isolated or lonely folks, those socially connected are at less risk of premature death. As the writer of Ecclesiastes surmised, “Woe to one who is alone and falls and does not have another to help.”

But how many friends are enough? And for how many meaningful relationships do we have time and energy?

He first derived that number—“Dunbar’s number”—by noting, in primates, the relationship between neocortex size and group size: the bigger the neocortex, the bigger the group. Extrapolating from his studies of non-human primates, he predicted that a manageable human group size would be around 150.

Many evolutionists and animal behavior observers find Dunbar’s number amusing but, at best, simplistic. They note, for example, that primate group sizes are also influenced by diet and predators (see here and here). As one primate-culture expert told me, “We humans are too complicated to expect these simple numerical approaches to work.” In response, Dunbar—who seems not to suffer his critics gladly—vigorously defends his number.

In his new book Friends (now available in the U.S. on Kindle in advance of a January, 2022 hardcover), Dunbar itemizes examples of 100- to 250-person human groups, including Neolithic, medieval, and 18th-century villages; Hutterite communities; hunter-gatherer communities; Indigenous communities from Inuit to Aboriginal; military companies; wedding invitees; and Christmas-card networks. “Every study we have looked at,” he emphasizes, “has consistently suggested that people vary in the number of friends they have, and that the range of variation is typically between 100 and 250 individuals.”

But surely, you say, that number (which includes both family and nonfamily friends) varies across individuals and life circumstances. Indeed, notes Dunbar, it varies with

Dunbar also describes people’s friendship layers. On average, he reports, people have about 5 intimate shoulder-to-cry-on friends—people they’re in touch with “at least once a week and feel close to.” Including these, they have, in sum, 15 close friends whom they’re in contact with at least monthly. The 50-friend circle incorporates our “party friends”—those we are in contact with at least once every six months. And the 150 totality incorporates those we’re in touch with at least annually—“what you might call the wedding/bar mitzvah/funeral group—the people that would turn up to your once-in-a-lifetime events.” 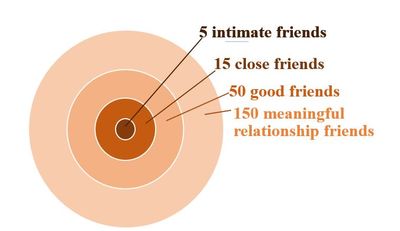 Dunbar’s layers: Our friendship circles are of increasing size and decreasing investment/intensity (with each circle including the numbers in its inner circles). As on Facebook, “friends” include family.

Our friendship circles vary in the time and concern we devote to them, says Dunbar. From studying people’s time diaries and friendship ratings and from analyzing big data on phone texting and calls, he found that we devote about 40 percent of our total social time to the 5 people in the innermost circle, and a further 20 percent to the additional 10 people in the 15-person “close friends” circle. Think about it: 60 percent of our total social effort is devoted to just 15 people. The remaining ~130 have to make do with what’s left over.

Do Dunbar’s numbers resonate with your experience? Do you have a small inner core of friends (including family) who would drop anything to support you, and vice versa? Are these supplemented by a somewhat larger group of close-friend social companions? And do you have further-out layers of good friends and meaningful acquaintances that you would welcome to significant life events?

Even if, as critics charge, Dunbar’s numbers are too exact, two conclusions seem apt. First, as Aristotle long ago recognized, we humans are social animals. We flourish and find protection and joy in relationships. Second, close relationships are psychologically expensive. Life requires us to prioritize, allocating our limited time and mental energy among our relationships. Friendships feed our lives—but, as with food, we’ve only got room for so much.