Happiness Across the Life Span

This moment is both the oldest you have ever been, and the youngest you will henceforth be. To live is to age.

But which age tends to offer the best of life, and which the worst? Should we anticipate our mid- or later-life future with hope, or with dread?

When asked which life eras are the unhappiest, some say it’s the teen years: mood swings, social anxieties, parental demands, peer pressures, and career worries. Some say it’s later life, with its diminished occupational purpose, stamina, recall, and social networks—and with the Grim Reaper looming ever closer. Still others say it’s the in-between “midlife crisis” years, when people (traditionally referring to men) realize their career fantasies are not being realized, their marriage is ho-hum, and their bodies are aging. “While Diana puts on a brave face,” declared a 1991 People magazine cover, “a brooding [42-year-old] Prince Charles grapples with a midlife crisis and retreats to his old girlfriends.”

Three decades ago, when authoring The Pursuit of Happiness: Who is Happy—and Why, I surmised that, apart from happy and stressful life events, no time of life was notably happier or unhappier. Consider Ronald Inglehart’s 1991 aggregated worldwide big data: 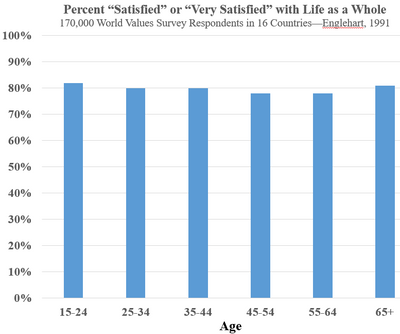 Follow-up research confirmed the life span stability of well-being, with Robert McCrae, Paul Costa, and colleagues finding “no evidence” of instability in midlife men and women, including one study with 10,000 participants. Moreover, when the Gallup Organization (in data shared with me in 2010) asked 142,682 people worldwide to rate their lives on a ladder, from 0 (“the worst possible life”) to 10 (“the best possible life”), age gave no clue to life satisfaction: 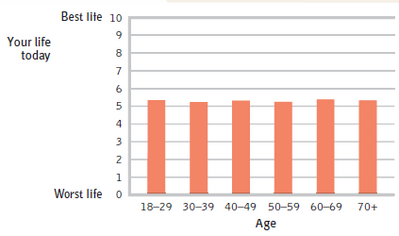 Andrew Jebb and colleagues analyzed more recent Gallup data from 1.7 million people in 166 countries, and although they also found claims of a U-shaped happiness trend, they similarly observed that a midlife dip is “overblown.” Any age differences, said the researchers, are “trivial.”

Amassing similar, newer cross-sectional and longitudinal data similar, University of Alberta psychologist Nancy Galambos and her collaborators (see here and here) agree: “We cannot conclude that there is a universal U shape in happiness.”

But hold on. Dartmouth College economist David Blanchflower and his colleagues (here and here) beg to differ, citing more than 300 studies, with data from 146 countries, that do find a U shape: “The midlife low occurs in the mid-40s.”

Their conclusion? The midlife crisis is real: “Midlife is a time when people disproportionately take their own lives, have trouble sleeping, are clinically depressed, spend time thinking about suicide, feel life is not worth living, find it hard to concentrate, forget things, feel overwhelmed in their workplace, suffer from disabling headaches, and become dependent on alcohol.”

When examining the newest Gallup World Poll survey data, Harvard epidemiologist Tyler VanderWeele and his co-researchers similarly “found the classic U-shaped pattern with life evaluation being higher for younger people and older people (up through about age 80) and lower in middle life.”

The Blanchflower, Giuntella, and VanderWeele findings have changed me from a confident skeptic of U-shaped life span happiness to a curious agnostic, but still believing the age effect to be modest compared to bigger happiness predictors, such as personality traits, social support, and sense of life purpose, meaning, and hope.

What’s more certain and concerning is a dramatic decline in psychological well-being among younger Americans. The last decade has witnessed an unprecedented soaring of serious depression among U.S. teens and young adults. 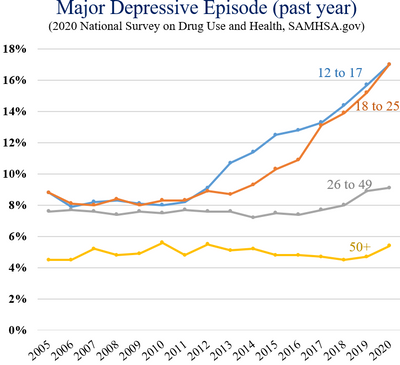 So be kind to the young adults in your life (possibly yourself). And consider more good news. As Nathan DeWall and I documented in Psychology, 13th Edition, older adults become more attentive to positive news, with their brains less responsive to negative events. They experience fewer relationship stresses, including less anxiety and anger. They become more trusting. And they become more likely to remember their lives’ good rather than bad events.

In later life, we also become more emotionally stable, our emotional highs less high, our lows less low. Things that used to irritate—slow traffic, poor restaurant service, a friend’s snub—no longer seem like such big deals. With age, compliments trigger less elation and criticisms less despair, as each become mere iotas of additional feedback atop a lifetime of accumulated praise and reproach. “At 70,” said Eleanor Roosevelt, “I would say the advantage is that you take life more calmly. You know that ‘this, too, shall pass!’”

Ergo, despite recent indications of a slight midlife dip, people’s happiness and life satisfaction is remarkably stable—with the striking exception being the dramatic recent rise in teen/young adult depression. But the best news is that later life is not to be feared. For most older adults, life seems, on balance, to be, and to have been, mostly good.

(For David Myers’ other essays on psychological science and everyday life, visit TalkPsych.com or his new essay collection: How Do We Know Ourselves: Curiosities and Marvels of the Human Mind. Follow him on Twitter: @davidgmyers.)