German medical statistics expert (and psychologist) Gerd Gigerenzer can regale you with stories of ill-fated health-risk communications. He tells, for example, of the 1990s British press report that women taking a particular contraceptive pill had a 100 percent increased chance of developing potentially fatal blood clots. That massive-sounding risk caused thousands of horrified women to stop taking the pill—leading to a wave of unwanted pregnancies and some 13,000 additional abortions (which, ironically, entail a blood clot risk of their own). So, was the press report wrong? Well, yes and no. The risk did double. But it remained infinitesimal: increasing from 1 in 7000 to 2 in 7000.

Fast forward to today’s dilemma for those contemplating getting a COVID-19 vaccine: Are the vaccines both safe enough and effective enough to warrant becoming vaccinated? How protective are they? Consider two possibly misleading reports:

Actually, the news is much better. Consider what that “95 percent effective” statistic actually means. As the New York Times' Katie Thomas explained, the Pfizer/BioNTech clinical trial engaged nearly 44,000 people, half of whom received its vaccine, and half a placebo. The results? “Out of 170 cases of COVID-19, 162 were in the placebo group, and eight were in the vaccine group.” So, there was a 162 to 8 (95 percent to 5 percent) ratio by which those contracting the virus were unvaccinated (albeit with the infected numbers surely rising in the post-study months). Therein lies the “95 percent effective” news we’ve all read about.

So, if you receive the Pfizer or equally effective Moderna vaccine, do you have a 5 percent chance of catching the virus? No. That chance is far, far smaller: Of those vaccinated in the Pfizer trial, only 8 of nearly 22,000 people—less than 1/10th of one percent (not 5 percent)—were found to have contracted the virus during the study period. And of the 32,000 people who received either the Moderna or Pfizer vaccine, how many experienced severe symptoms? The grand total, noted David Leonhardt in a follow-up New York Times report: One.

Gigerenzer tells me that his nation suffers from the same under-appreciation of vaccine efficacy. “I have pointed this misinterpretation out in the German media,” he notes, “and gotten quite a few letters from directors of clinics who did not even seem to understand what’s wrong.”

“Be assured that YOU ARE SAFE after vaccine from what matters—disease and spreading,” tweeted Dr. Monica Gandhi of the University of California, San Francisco. Although we await confirmation that the vaccines do, as expected, reduce transmission, she adds that “Two vaccinated people can be as close as 2 spoons in [a] drawer!”

The near 100 percent efficacy is “ridiculously encouraging,” adds Paul Offit, the Vaccine Education Center director at Children’s Hospital of Philadelphia. Moreover, notes stats geek Nate Silver, “Telling people they can't change their behavior even once they get a vaccine is a disincentive for them to get vaccinated.”

With other vaccines and virus variants the numbers will, of course, vary. And as one of the newly vaccinated, I will continue—for as long as the pandemic persists—to honor and support the needed norms, by masking and distancing. I will strive to model protective hygiene. But my personal fear of COVID-19 will be no greater than the mild fear and resulting caution that accompanies my biking and driving. Moreover, for all of us, vaccine statistical literacy—and the need to accurately convey health risks and benefits— matters. In this case, it matters a lot.

[2/20/2021 P.S. In a follow-up twitter thread, David Leonhardt offered this table, showing that of 74,000+ participants in one of the five vaccine trials, the number of vaccinated people who then died of COVID was zero. The number hospitalized with COVID was also zero.} 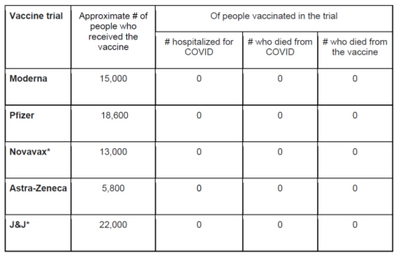