Does Political Hate Speech Merely Reflect —or Does It Affect—Public Attitudes?

“Donald Trump . . . unleashed something, that is so much bigger than he is now or ever will be: He pushed the limits of acceptability, hostility, aggression and legality beyond where other politicians dared push them.” ~ Charles Blow, 2022

This is a venomous time. From 2015 to 2019, FBI-reported U.S. hate crimes increased 25 percent. Social psychologists have therefore wondered: Is this increase, and the accompanying resurgence of white nationalism, fed by Donald Trump’s rhetoric—his saying, for example, that the torch-carrying Charlottesville white nationalists included some “very fine people”? Or did the president’s tweets and speeches merely reflect existing prejudices, which, in a few disturbed individuals, fed hateful acts?

Simply put: Do political leaders’ words merely voice common prejudices and grievances? Or do they also amplify them?

They do both. Leaders play to their audiences. And when prominent leaders voice prejudices, it then becomes more socially acceptable for their followers to do likewise. When disdain for those of another race or religion or sexual orientation becomes socially acceptable, insults or violence may ensue. Social norms mutate, and norms matter.

Some of their studies followed samples of Americans from 2014 to 2017, ascertaining their attitudes toward Muslims (whether they agreed, for example, that “Islam is quite primitive”). As seen on this 7-point scale of anti-Muslim prejudice, Trump supporters’ anti-Muslim sentiments significantly increased. 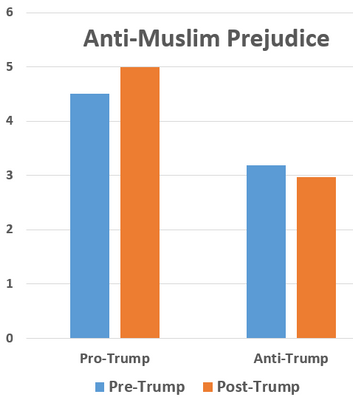 But what about those for whom Donald Trump was not a positive role model? Would they become less imitative? Might they be like those observed in one study of jaywalking, in which pedestrians became less likely to jaywalk after observing someone they didn’t admire (a seeming low-status person) doing so? Indeed, Trump opponents exhibited decreased Muslim prejudice over time.

Moreover, Ruisch and Ferguson found, “Trump support remained a robust predictor of increases in [anti-Muslim] prejudice” even after controlling for 39 other variables, such as income, age, gender, and education. Trump support also predicted increases in other forms of prejudice, such as racial animus (“Generally, Blacks are not as smart as Whites are”) and anti-immigrant attitudes.

Pew national surveys similarly find that the attitude gap between those voting for and against Trump widened from 2016 to 2020 (see the 2020 data below). The 57 percent of Democrat voters who, in 2016, agreed that it’s more difficult to be a Black American than a White American increased to 74 percent in 2020, illustrating the general historical trend toward more egalitarian attitudes. But no such positive shift occurred among Trump supporters, whose agreement with the concept of Black disadvantage actually declined slightly, from 11 percent in 2016 to 9 percent in 2020. 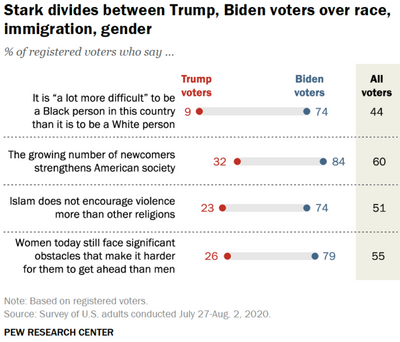 Their conclusion aligns with the earlier finding of a political science research team—“that counties that had hosted a 2016 Trump campaign rally saw a 226 percent increase in reported hate crimes over comparable counties that did not host such a rally.”

The happier news is that political leaders’ speech can work for better as well as for worse. In one month during 2021, a Stanford research team randomly assigned 1014 counties with low vaccination rates to receive 27-second YouTube ads (via TV, website, or app). Each featured Donald Trump’s expressed support for Covid vaccinations. After a Fox News anchor’s introduction, shown below, clips featured the Trumps getting the vaccine, with Ivanka saying, “Today I got the shot. I hope you do too” and Donald explaining “I would recommend it, and I would recommend it to a lot of people that don’t want to get it.” At a cost of about $100,000, the add was viewed 11.6 million times by 6 million people. 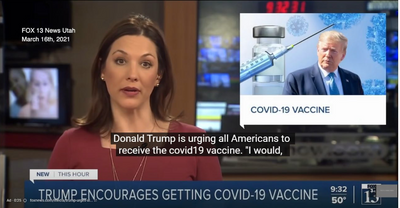 When compared with 1018 control counties, the experimental treatment counties experienced an additional 104,036 vaccinations, for an additional cost of less than $1 each.