Autism Spectrum Disorder Is Increasing—Or Is It?

In Exploring Psychology, 12th Edition, Nathan DeWall and I report that autism spectrum disorder (ASD) “is now diagnosed in 1 in 38 children in South Korea, 1 in 54 in the United States, 1 in 66 in Canada….”

Check that. A new CDC report on 2018 data raises the continually increasing U.S. proportion to 1 in 44 (23 per 1,000 among 8-year-olds in eleven representative communities followed by the Autism and Developmental Disabilities Monitoring Network).

The report also confirms that ASD diagnoses are four times more common among boys than girls. Psychologist Simon Baron-Cohen believes the gender imbalance is because boys tend to be “systemizers”: They more often understand things according to rules or laws, as in mathematical and mechanical systems. Girls, he contends, tend to be “empathizers”: They excel at reading facial expressions and gestures.

And what racial/ethnic group do you suppose has the highest rate of ASD diagnoses? The answer: There are no discernible differences (nor across socioeconomic groups). In 2018, ASD was diagnosed equally often among all racial/ethnic groups. 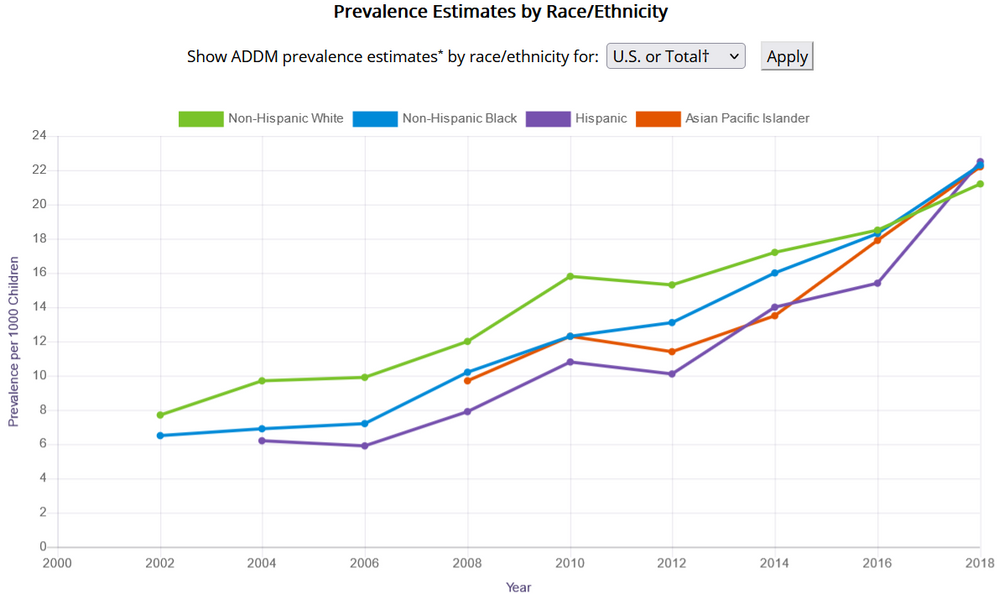 A final fact to ponder: 4-year-olds, the CDC reports, were “50 percent more likely to receive an autism or special education classification” than were 8-year-olds.

So what do you think? Is the increasing ASD diagnosis rate—over time and of 4-year-olds—a a welcome trend? Is Karen Remley, director of the CDC’s National Center on Birth Defects and Developmental Disabilities right to regard this “progress in early identification” as “good news because the earlier that children are identified with autism the sooner they can be connected to services and support”?

Or does the increased labeling of children become a self-fulfilling prophecy that assigns children to a category that includes some social deficiency, and then treats them differently as a result?

And does the trend reflect some relabeling of children’s disorders, as reflected in the decreasing diagnoses of “cognitive disorder” and “learning disability”? (The popularity of different psychiatric labels does exhibit cultural variation across time and place.)

In this COVID-19 era of anti-vax fears, this much we know for sure: One thing that does not contribute to rising ASD diagnoses is childhood vaccinations. Children receive a measles/mumps/rubella (MMR) vaccination in early childhood, about the time ASD symptoms first get noticed—so some parents naturally presumed the vaccination caused the ensuing ASD. Yet, despite a fraudulent 1998 study claiming otherwise, vaccinations actually have no relationship to the disorder. In one study that followed nearly 700,000 Danish children, those receiving the measles/mumps/rubella vaccine were slightly less likely to later be among the 6517 ASD-diagnosed children.