What Was The “Never” Pin? 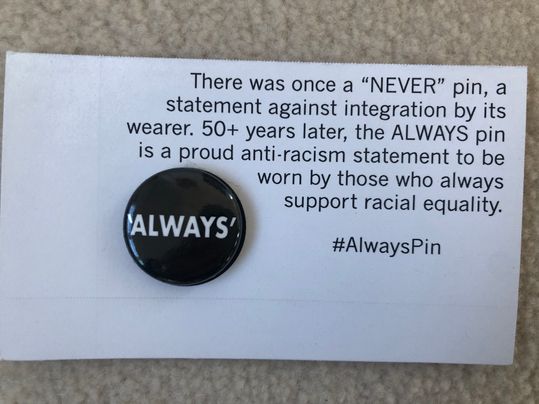 Before the pandemic hit, my friend Harmony took a self-guided tour of civil rights sites: she walked across the Edmund Pettus Bridge and visited the National Memorial for Peace and Justice (aka the Lynching Memorial), but she had a special epiphany at the Selma Interpretive Center. At the very back of that museum, she saw a white button about the size of a quarter with one word on it in bold black type: NEVER. Below the pin, she read that this was

one of the symbols of white power in Selma and Dallas county [that was] worn to demonstrate defiance to court-ordered integration and opposition to equality for Black Americans. Sheriff James Clark and other segregationists would wear their “NEVER” pins to identify themselves in public.

Harmony, who is a textile artist, says that the moment she saw that pin and read the inscription, “the idea just struck me to make an ALWAYS pin to show support for racial equality.” And so she did! (See above.) She designed the pin and then found a manufacturer owned by a woman of color in Detroit to produce 1,000 buttons that she is now giving away to anyone who wants one. (I have mine on right now and plan to wear it “always.”)

When I told my grandnieces about the pin, they not only wanted one of their own to wear, but they also wanted to think of other pins or buttons they might design to help carry the message. That got me thinking about using the NEVER and ALWAYS pins as a writing prompt for class discussion about racial justice and as a challenge to students to do some research on their own or in small groups about the role buttons/pins have played in other historical periods. They could then design buttons of their own that contribute to the conversation. Their research might lead to interviews with older relatives or neighbors who might remember particular buttons (or even have them in a box somewhere), as well as to archives in their home towns. Such investigations might lead them to reflect on the line between advocacy and propaganda (is there one?) and the way such buttons or pins were used in other movements (such as feminist and LGBTQ+) or institutions (like the military and universities). And, of course and always, to the way language is used to shape our views, often without our even recognizing that it is doing so.

In the meantime, you can find out more about Harmony’s trip and the ALWAYS pins on her blog.