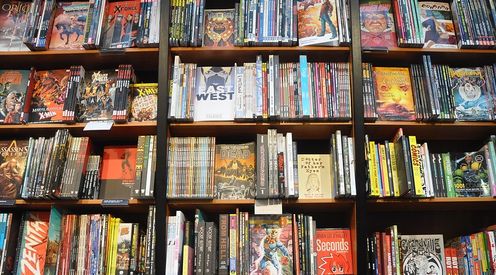 As a kid in the 1950s, I read the “funny papers” and occasional comic books like everyone else I knew, but I didn’t get seriously interested in the genre until I studied rhetoric, until I began to understand the range of communicative tools available to a rhetor/writer, and until I understood “languaging,” as many colleagues are now calling it, to reach far beyond words on a page (or, nowadays, a screen). Given the autonomous view of literacy prevalent at the time, I had a very script-centric view of writing, but one that slowly gave way to what Brian Street called the “ideological model of literacy” as a social practice.

And so I immersed myself in reading studies of orality and of the spoken, embodied word—learning especially from Geneva Smitherman—and relished all that these studies brought to writing. I began, to “hear” writing, though not nearly as well as the kind of “listening in print” described in Nicole Furlonge’s Race Sounds: The Art of Listening in African American Literature. And as my grandmother used to say, “slowly . . . but slowly,” I turned my attention to other graphic forms of communication, realizing that, as Leslie Marmon Silko says, “after all, words are images,” and that words not only invoke but also attract other images and summon them into collaboration.

For years before I retired, I taught writing courses themed on graphic narratives, courses that every term drew students from all majors on campus, perhaps attracted first just by the idea of comics but soon enough as intrigued as I was by the rhetorical combination of word, image, and invoked sound. I still remember those courses as among my favorites of all time. (Just a few days ago, a student in one of those courses well over a decade ago now wrote to say that he was, at last, creating his own graphic narrative!).

I still read graphic narratives as often as I can, though the veritable renaissance of the genre we are experiencing makes it impossible to keep up with the outpouring of remarkable new works (check out, for example, Harmony Becker’s Himawari House, which features young Japanese American, Korean, and Singaporean women’s adventures in Tokyo and which mixes languages and dialects in delightful and insightful ways—or two dozen other works I could name!). As I do so, I realize more and more the synesthesia that is reading/listening/writing/speaking/drawing.

A week or so ago I re-read Gene Luen Yang’s Dragon Hoops: From Small Steps to Great Leaps, a story anchored in his real-life experiences teaching at Bishop O’Dowd High School in Oakland. Yang tells the story of basketball coach Lou Richie and his O’Dowd Dragons, from Yang’s admission that he “hated sports” and “especially basketball;” to his introduction to Coach Lou and the team; to his growing fascination with the complex, deeply meaningful, and often fraught relationships among coach and players and opponents; and to the dazzling heights and depths the team experiences. But it is also so much more than that story, as Yang detours to explore the origins of the sport, its eventual expansion to allow the women’s sport to grow and flourish, and a glorious chapter on the Harlem Globetrotters and the entrance of African Americans and other people of color into the professional game. And all drawn and lettered in Yang’s simple, clean style—so friendly, accessible, and warm.

In teaching graphic narratives, I found that students inevitably came away from them with passionate inquiries of their own and research projects that led them to discoveries—and to often astonishing analytic pieces of writing. These pieces were richly illustrated and also presented orally in our class, having students make their own multimodal compositions that appeal to and mix all our senses. “Ah,” I think, “now that’s writing!”

Teaching graphic narratives—and reconsidering them today—has led me to contemplate just how to define writing for today’s world and beyond. I know that many other writing teachers are thinking about this same question. How do you define writing today?

Image Credit: "Graphic Novels" by morebyless, used under a CC BY 2.0 license