The Sound of Silence

In the age of screens and social media, with everyone talking (often at the top of their lungs), it’s easy to forget that silence can be a powerful communicative act. Think of Edvard Munch’s silent The Scream, or the horrifying silent scream in Mother Courage. Cheryl Glenn has written eloquently about silence (See Unspoken: A Rhetoric of Silence) and its wide range of uses and powers. I also think of Mary Belenky and her colleagues’ influential book, Women’s Ways of Knowing. In the first edition of that work, they referred to “silence” as the stage of knowing when women are completely dependent on powers external to them. But in the second edition, they changed “silence” to “silenced.” That added “d” changed everything; it’s one thing to be silent, another to be silenced.

During the last month, we have heard from many young people who are responding to the Valentine’s Day murder of seventeen people at Marjory Stoneman Douglas High School in Florida. Almost immediately following the tragedy, students began raising their voices, using the media skillfully to underscore their outrage and enumerate their demands for school safety. Their voices were echoed across the country, from New York to Chicago to Los Angeles, leading to a national school walkout and a March for our Lives on March 24, held in Washington DC but with sister marches occurring across the country. These young people demanded to be heard, staring down state legislators as well as members of Congress and speaking their own truths to power.

They also knew that silence can have power: we could see it in the dramatic pauses they inserted into their speeches. But no one used the rhetorical power of silence more effectively than Emma Gonzalez, a senior at Douglas who took the mike on March 24, announcing that it had taken all of 6 minutes and about 20 seconds for the shooter to end seventeen lives, calling out the names of the dead and noting all the things that they would now “never” be able to do. As the New York Times reported, Gonzalez

spoke for just under two minutes on Saturday before tens of thousands of demonstrators at the March for Our Lives rally in Washington, describing the effects of gun violence in emotional detail and reciting the names of classmates who had been killed.

Then she said nothing for four minutes and 26 seconds.

The huge crowd was absolutely silent as Gonzalez spoke, and they remained silent as she herself fell silent. Early on in the silence, some began to chant . . . but those chants quickly faded away as the crowd stood in mute testimony to those lives lost. As Cheryl Glenn has said, silence can be a powerful rhetorical act, and on March 24, Emma Gonzalez proved the point in her moving, riveting, silent call to action.

I think it’s worth pointing out to our students that they too can be powerful users of silence, in class discussion, in oral and multimedia presentations, even in their writing as they leave certain things unsaid or use punctuation, line breaks, and white space to signal silence.

Sometimes silence can speak much more powerfully than words. 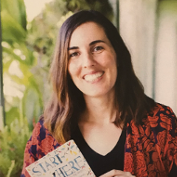 This goes perfectly with what I am trying to prepare for CCCC 2019. I am looking at performance in the digitally mindfully FYW classroom. Mahalo Andrea.

Thanks to you and all who are helping to teach students how to use silence AND their own voices!