The Problem with “Senseless”: Timely Teaching on How Language Matters 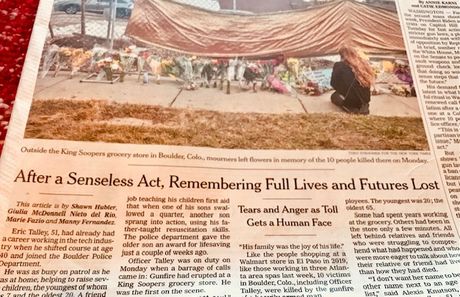 As we teach about the impact of language choices in our writing classrooms, I hope we consistently demonstrate the power of those rhetorical decisions beyond the classroom, too. A handful of words can be as consequential as a finger on the trigger.

After yet another mass shooting, this time in Boulder, Colorado, I brought into class a New York Times headline for students to analyze: “After a Senseless Act, Remembering Full Lives and Futures Lost.” In just a moment, multiple students had caught what the experienced headline writers had missed: To call a mass shooting “senseless” suggests rational people could neither have foreseen the event nor could they analyze it after the fact. However, this tragedy, like the other mass shootings that preceded it, is full of “sense.” There is a terrible logic to the shooters’ motivations, and a clear pattern we can and should learn from. The use of the word “senseless” in this context is a cliché that keeps us from considering the precipitating factors of mass shootings, such as the brutality of masculine scripts, the impact of shame and bullying, and the inevitable results of easy access to assault rifles, among other issues.

A reexamination of the rhetoric commonly used to discuss mass shootings in our country could lead to a reexamination of the norms and policies that enable these tragedies to occur. Frank Bruni centered the problem of the phrase “gun control” in a recent column that makes a useful in-class close-reading assignment. Besides focusing on the object, as well as the exclusion of the actor or the social structure, the phrase “gun control” stands in front of a complex social landscape, obscuring it and thus making it harder to think about. To his credit, Bruni doesn’t try to solve this linguistic problem on his own. Instead, he invites a communal discussion. A flood of letters ran on March 31 with suggestions for new language that included “gun safety,” “weapons management,” and “responsible gun ownership.” Your students might have excellent ideas to add to this conversation, along with further analysis about the problems of the phrase “gun control.” In a country often described as “gun crazy,” we require thinkers who will push all of us to see the meanings and impacts of living in a country with more guns than people.

The problem of anti-analytical, obfuscating language has been a topic in my class all semester. In January, I invited students to keep track of a common verbal tic we heard in our Zoom room: Labeling situations “crazy” (i.e. “The wealth gap is just crazy!”). Like the word “senseless,” the word “crazy” suggests that a situation, or person, is not rational or comprehensible. The casual use of “crazy” also contributes to mental health shaming. We decided that every time we heard ourselves or others saying “That’s so crazy,” we’d gently suggest an alternative: “That’s worth analyzing.” The latter phrase calls us to action and reminds us of our critical powers.

These conversations are related, of course, to the precise language we use in teaching writing. The common impulse to describe good writing as “flowing,” for example, obfuscates the specific moves writers make in introductions, connections, signposting, transitions, and other rhetorical decisions that produce the readerly effect of “flowing” prose. My co-author Stuart Greene and I offer specific strategies and language for teaching readerly writing and writerly reading in the new 5th edition of From Inquiry to Academic Writing, a text that builds on the ideas in this post.

What are your favorite methods of teaching students to see the power of rhetorical decisions to obscure or reveal truths? My “ripped from the headlines” approach is just one.

Image Credit: Photo of the New York Times taken by the author