The Paradigm Shift in American Advertising 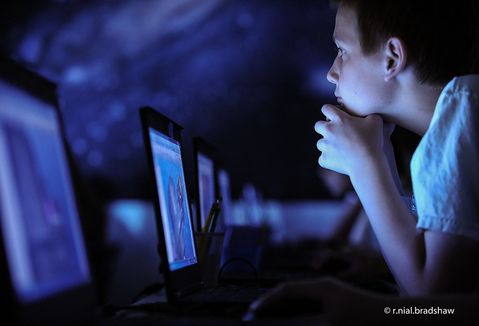 Boy using computer in classroom. "classroom-laptops-computers-boy" by R. Nial Bradshaw is licensed under CC BY 2.0.

When Sonia Maasik and I published the first edition of Signs of Life in the USA in 1994, the Internet was only just emerging as a new medium in American life—one that had not yet significantly affected the way we consume products and entertainment, nor the ways in which goods and services are advertised. As we now know, the exponential growth of the Internet since then has changed all that. Entertainment is increasingly streamed across myriad digital platforms, and marketing has become a highly targeted matter: calculated algorithms match certain advertising to certain consumers, whose profiles have been constructed using data-mined information that has been gathered through what amount to digital spy networks. Gone are the days when advertising professionals (can you spell Mad Men?) cast about for a way of determining what, exactly, their target markets wanted through organic means; and equally gone are the days when there were but three national television networks broadcasting the same content to a relatively undifferentiated mass audience.

As I say, all this is commonly understood, but I think that this paradigm shift has reached a point where those of us who analyze popular culture through the lens of cultural semiotics in order to take the pulse, as it were, of American society, must revise our approach. This blog will be a sketch in that direction.

I was prompted to make this my inaugural topic for the 2022-23 Bits blogging year while visiting some friends over the Labor Day weekend who were watching a baseball game on TV when I dropped by. The game itself was rather dull, which wasn’t much of a surprise, but what really struck me was how dull and repetitious the advertising was. There seemed to be only two or three sponsors (insurance companies of one kind or another) who kept repeating the same uninspired advertisements. “What happened to all the car commercials and fast-food spots?” I wondered, as the same few ads rotated through each commercial break. “Where are the razor blades and after shave lotions?”

Being the incorrigible cultural semiotician that I am, I shared my thoughts with my friends, who weren’t much interested in the game either. They also happen to be very well versed in all things Internet (well, of course! they are millennials), and in the course of our conversation I learned that today’s television sets are essentially big-screen computers that are completely integrated with the Internet—which means that watching TV is no different than surfing the Web insofar as a viewer’s every move is being monitored and mined for data. And at that moment a light flashed on in my head: no wonder the advertising for the game was so half-hearted and so bereft of sponsors! Why bother with the expense of traditional, scatter-shot advertising spots when all you need to do is buy viewer data from the data marketers and then shoot targeted advertising at them on their smart phones?

The implications of all this are profound, because it means that mass culture has now been so sliced and diced into ever more granular consumer markets that attempting to determine the tenor of American life and consciousness simply by interpreting mass media content is doomed to failure. What we must do now is interpret what we don’t see on our TVs, as well as what we do. We must seek out the many sources of information and content that do not get covered in such mainstream media outlets like the New York Times, the Washington Post, the Los Angeles Times, Atlantic, Slate, Vogue, and Vox, for example. We must research and analyze what those who still use outmoded technology to discover what they are seeing in the way of television content advertising, and what this tells us. It is apparent that there are now essentially two Americas when it comes to entertainment and marketing: the younger tech-savvy audiences who get their news, entertainment, and advertising exclusively via digital media, and the traditionalists who go under the radar when it comes to cultural analysis. These two groups represent a split that parallels that of the great divide in American political culture, as the latter group has, accordingly, blind-sided the high-tech pundits of political prognostication in election after election in the new millennium.