The Language, Culture, and Justice Hub at Brandeis 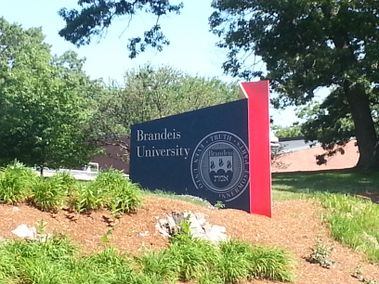 On a recent tip from Shawna Shapiro, I got to attend a virtual seminar sponsored by Brandeis University’s Language, Culture and Justice Hub, which is part of the university’s International Center for Ethics, Justice and Public Life. Though I tuned in a little late, I believe the webinar was organized by Professor Leigh Swigart, a linguistic anthropologist who serves as Director of the Center’s Programs in International Justice and Society.

One of the early slides in the four brief presentations really resonated with me: it aimed to capture the evolution we seek in terms of diverse languages and dialects. Beginning with monolingual English on the left margin, naming the still-too-often state of affairs, arrows pointed right to tolerance of linguistic diversity and then to acceptance, respect, and finally affirmation, solidarity, and critique. This simple graphic succinctly captured the struggle we are engaged in and implicitly challenged those at the webinar (and all teachers of writing) to place themselves and their departments/colleges on the continuum: just where are we? What has led to that placement? And what will it take to move to the affirmation end of the continuum? It struck me that we can ask the same question of our students: where do they place themselves on the continuum and what led to that placement?

One other takeaway from this webinar came in Shapiro’s remarks. For Shapiro, three key terms to guide our teaching and our pedagogy and our curricula are Access, Asset, and Agency. In discussing access, she referred to her commitment to explaining the why of her courses: why she had chosen the topic, the readings, the assignments, the whole curriculum, so that students have access to her thinking—and have a chance to engage with it and to add their own responses. Access also assumes that we will consciously help students in understanding how to meet (and to critique) the expectations implicit in any course.

Urging that we reject any deficit-based framework for writing and reading instruction (instead of asking what students lack but rather what the institution lacks) in favor of an assets-based perspective, Shapiro offered a couple of examples of how we can promote agency and value assets at the same time. We can, she continued, suggest that students might want to include citations in any language rather than looking for translations, thus valuing the language of the original research being cited. She also led a brief discussion on the use of names in the classroom, giving examples of asking students what they preferred to be called (and learning how to pronounce it correctly) but not rejecting out of hand what she called “additive identities,” that is, a name a student might have chosen for good personal reasons rather than just because their given name was “hard for English speakers to say.” Recognizing and respecting names is, of course, one way of adding to student agency.

Of course, offering students a wide range of choices—in readings, in assignments or projects, in forms of assessment—are other important ways of helping build a sense of personal agency and autonomy. That is a goal I believe all teachers of writing can and should aspire to!

The image above, "Brandeis University" by Eric_Haines, is licensed under CC BY 2.0.