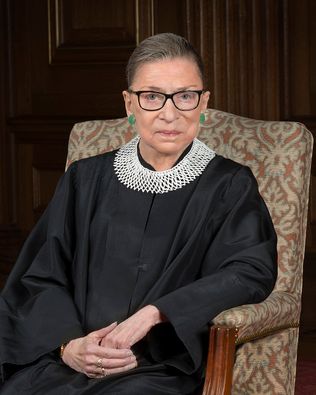 As I write this post on September 20, it’s been two days since the death of Justice Ruth Bader Ginsburg, and in that time I’ve thought of little else: I’ve found myself putting aside my ordinary routine to search out every tribute I can find and to go back to read earlier profiles of her. I’ve re-watched the film and documentary about her. I’ve spent time listing the ways my life as a woman and as a citizen of this country is better because of the work she did to guarantee justice under the law. And I’ve wept. A lot.

I’ve thought of the challenges she faced early on, the struggle to get into law school, to earn her degree, to find a job. Born in the decade after Ginsburg, I have my own stories to tell of being kept or left out, of being told to stay in my place, that I was “just a woman” and hence couldn’t do x, y, or z—stories that almost all women of my generation can echo (and doubly or triply so if they are women of color). In 2012, I was reminded of this as I sailed around the world with 600 students on Semester at Sea, and our group was joined by former Senator Charles Robb and his wife, Lynda Johnson Robb. One evening, we gathered around while Lynda Robb (who is just about my age) told some stories of her own—such as the time when she was working to support her husband as he earned a law degree, when she was the bread winner in the family, and when her attempt to write a check at a grocery store was rejected unless she “had her husband’s signature.” During these same years, Ginsburg was asked to take a lower salary as a professor because her husband had a good-paying job—and concealing her pregnancy because she feared she would not be reappointed if it were discovered.

I find that many young women today are amazed to learn of these everyday injustices—or to understand the role that Ruth Bader Ginsburg played in changing these stories, in leveling the playing field, in arguing for equal protection and equal opportunity and equal justice under the law—for all. As I’ve thought about her life-long commitment to equal justice, I’ve also thought of the ironic title of Claudia Rankine’s recent collection of poems, essays, photographs, Just Us. The title comes from one of Richard Pryor’s standup sketches on the criminal justice system, when he says, “You go down there looking for justice.,. That’s what you find: just us.” And I’ve thought of how much incredibly hard work remains to be done if we hope to keep Ginsburg’s legacy of advancing justice alive and if we hope to keep that legacy from being eroded and turned back.

We have no choice but to try, through our teaching and our writing, to live up to the standard set for us by RBG. If we stop to think a moment, we’ll see that much of that legacy comes to us IN WRITING, in all those opinions and dissents she penned during her 27 years on the Supreme Court and in many decisions written before that time. She was a careful and precise writer, meticulous in attention to detail and tenacious in establishing unassailable chains of reasoning—the “steel-trap mind” so many refer to. So as teachers of writing, we could do a lot worse than to focus attention in the coming months to some of her writing, introducing it to students, and asking them to learn more about this tiny woman with a huge intellect, and about how she and her work affect their lives today.

Yesterday I had a chance to speak with my teenage grandnieces, and while they both knew that Ruth Bader Ginsburg was a justice of the Supreme Court, that she “stood up for women” and that she was “really cool,” cool enough to have movies made about her, their knowledge didn’t go much deeper than that. So it’s been fun to share some stories with them, to send them some articles to read, and to ask them to write to me about what they have learned from reading about her and what more they would like to learn.

Why, for instance, was she called “Notorious RBG”? What was the reference to Notorious B.I.G. about? If she was the second woman to serve on the Supreme Court, who was the first—and what did they have in common? What advice would she have for young women today? All good questions—now how about students doing some research in order to answer them and then writing about what they found out.

I can imagine starting a first-year writing class with such everyday questions and then moving on to a careful analysis of key RBG opinions, identifying the rhetorical strategies at work, tracing the lines of reasoning, and reading them aloud to feel the compact and powerful rhythms of her prose. And I can imagine talking about what in her prose, as well as in her life, we would like to emulate, leading us to conversations about what it means to a life committed to certain principles. And what those principles might be for each of us.

Such questions, such analyses and writings, such conversations are one way of honoring and extending the legacy of Ruth Bader Ginsburg. In these terrible times of loss and pain and suffering, of lies and deception, of fear mongering and hate, she holds aloft the light of truth and justice for us to follow. The glorious, notorious RBG.