The Ethics of Research 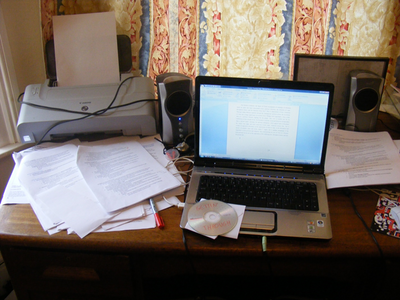 I must admit that when I was a new teacher, one of my nagging concerns about assigning a research paper was that my students would plagiarize. I started teaching back in a time when students didn’t have access to online sources. I would ask them to turn in photocopies of representative pages from their print sources with their papers so that I could check how they were incorporating their sources into their writing. Occasionally I would get that sinking feeling as I read words in papers that students clearly did not come up with on their own but that they chose not to document. I found myself asking: were these cases of dishonesty or misunderstanding of the conventions of a research paper?

Sometimes there was a clear pattern, such as only direct quotations were documented and nothing else. Sometimes, though, substantial portions of the essays were pulled verbatim from outside sources that were not identified. Usually the unidentified sources were not hard to find because the students who didn’t take the time to do their own work also did not tend to take the time to look very far for sources to copy. Over time, teachers learned to combat this issue by having students turn in works in progress. My students, for example, submitted a proposal, a working bibliography, sample note cards, and their opening paragraph before turning in the final product.

As I aged and gained more experience, I became less concerned that a student might try to deceive me and more concerned with teaching the important reasons for using sources and for documenting them. I tried to explain that a name and/or a page number in parenthesis might satisfy the letter of the law of documentation, but it might not necessarily establish the authority of the source. Part of a strong argument is using sources that bring to a subject a level of authority a student writer does not possess.

With the increasing ease of access to information through the internet came an even greater need to teach students to carefully evaluate sources. There were just too many sources available, and a common temptation was to use the first ones that popped up on the screen. It was possible to go through the motions of writing a researched essay without building anything close to a convincing argument. The resulting essays were reminiscent of reports students wrote when they were younger and not very discriminating. The failure to choose appropriate sources leads to weak arguments. In my classes, we talked about the differences among links that ended in .org, .com, and .edu, about sites with no clear author identified, and about how the date of publication affected the relevance of the information. I also suggested that if the name of the author of a source was not familiar, it might take a little more research to establish that author’s claim to authority.

In the months leading up to the 2016 presidential election, unprecedented numbers of Americans were turning to social media to form their opinions about the candidates. The same sort of indiscriminate acceptance of information that led students to write weak argument papers led Americans in large numbers to indiscriminately accept whatever they saw on their screens. If it was information that conformed to their way of viewing the world, they were quick to pass it along without thinking too much about its accuracy. Russians attempting to influence the election were able to do so largely because of this unquestioning acceptance of whatever appeared in “print” on screen and the willingness to share it with others. The need to question the validity of information that appeared online became critical to us as a society, not just to students as an academic exercise.

Our ability to evaluate information presented as fact suffered in a time of “alternative facts.” People questioned whether they could believe the number of deaths from COVID-19 because hospitals were accused of misrepresenting how deaths were labelled. And now we have a former president denying that he lost the election in 2020—even in the face of facts to the contrary—and millions of people are believing him.

Image Credit: “Essay Weekend” by Mike Mantin is used under a CC BY 2.0 license