Take Me Out of the Ball Game: Cultural Semiotics Makes the Big Leagues 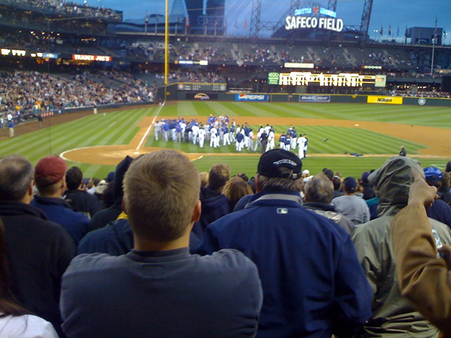 With Major League Baseball moving the All-Star game away from Georgia and relocating it in Colorado, I find myself thinking about one of the major leitmotifs of the tenth edition of Signs of Life in the USA, which is described in the Introduction to the book. For there, in an analysis of the ways in which the movies Avengers: Infinity War and Avengers: Endgame reflect the electoral situation in America today, I note how "Americans don't simply elect a president anymore, they seek regime change, from the Republican overthrow of Clintonism in 2000 to the Obama landslide in 2008 (which many at the time viewed as a permanent shift leftward in American politics) to the Revolutionary War-inspired Tea Party insurrection that enabled the Republican Party to capture both houses of Congress, and, in 2016, the White House itself." I also went on to note, in words that were written before the 2020 election took place, how the Democrats recaptured the House in 2018 and hoped to win back the Senate and the White House in 2020—which, of course, they did. But my point was that, like the wars of the Avengers, the defeat of one side is never to be taken as final, that the dead rise again, and that one electoral revolution simply leads to a counter-revolution in an unending cycle. And that counter-revolution is what is now taking place in states like Georgia, which are trying to make certain that the polling, um, “practices” of 2020 won't be repeated in 2022 (and beyond).

The inevitable spillover of such infinity wars into popular culture can be seen in MLB's eventual decision to take the All-Star game away from Atlanta, in Coca-Cola's (at first reluctant) denunciation of the election laws just passed in its home state, and the generally queasy response of corporate America to the situation, which puts into high relief the dilemma of a consumer capitalist society that is almost evenly divided down the middle. Facing angry consumer boycotts no matter which way they decide to go on the matter, companies like Delta and Coke are caught in the middle at a time when there is no middle in America anymore.

So we can expect to see a lot more of this sort of thing in the years to come, as well as a lot more consumer pressure from both sides in the conflict—not to mention a lot of clever routines on Saturday Night Live and impassioned statements at entertainment awards ceremonies. The one thing we can't expect, however, is any kind of reconciliation, or any location of a common ground in America. With polls showing a distinct partisan split over such things as whether or not to get vaccinated against COVID-19, it is clear that America's great divide has widened too far for any bridge to span. The unthinkable is already happening in the Peach state, where at least one Georgia legislator is actually saying "Pepsi, please" to signify his new cola allegiance.

Image Credit: "Baseball Brawl" by iotae is licensed under CC BY 2.0