Spotting Claims in the Headlines 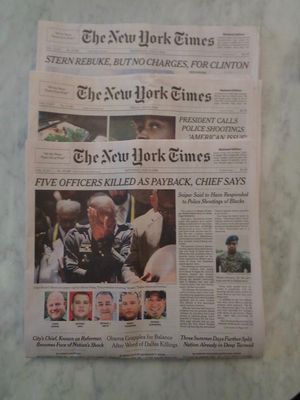 From the time students start learning the terminology of argumentation, they can start seeing examples in the headlines they see every day, starting with the claim of an argument. This can keep class discussions timely and relevant.

There are three types of claims: claim of policy, claim of fact, and claim of value. The differences among the types of claims can at times be subtle. Actually, the type of claim that is most difficult to support is the one that is easiest to recognize. That is the claim of policy, which states or implies that something should or should not be done. Students can easily locate examples of these any day in the headlines:

Remember, the classification of a claim has nothing to do with its validity, but rather with the form the claim takes. The opposite of each of these examples would also be a claim of policy.

The difference between the other two types of claims, the claim of fact and the claim of value, is suggested by their titles. It may seem strange to think that an argument would have to be made for a claim of fact. It would seem that simply stating a fact is enough. There will be times, however, when the goal is to prove a fact, but one that is not immediately apparent to all readers without support. We are not talking about the simple statement of fact such as the average annual amount of rainfall in Alaska per year, but statements such as these:

On the other hand, a claim of value makes a judgment. Students can recognize these by the presence of evaluative language in the claim. Many of these will have to do with arts or aesthetics since the value of art is a matter of subjective taste, but evaluative statements about other issues would also fall into this category.

Asking students to apply what they are learning about argumentation to the headlines should help them see the relevance of what could otherwise be viewed as a mere academic exercise. Our hope, of course, is that it will also make them better critical thinkers and citizens.