As a concept, “representation” shimmers with meaning, a complex topography of politics, textuality, and power. What does it mean to represent oneself, or to be represented — politically, culturally, textually, academically? What are the ripple effects? 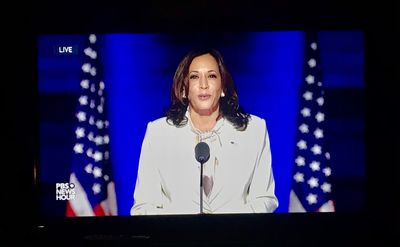 Senator Kamala Harris’s glass ceiling-smashing election to the role of Vice President has focused our national attention on the shimmer of representation. As the first Vice President-elect who is a woman, woman of color, and graduate of a HBCU, Harris strategically deployed these many meanings of representation on her November 14 speech in Delaware. Dressed head to toe in suffrage white on the 100th anniversary of the passing of the 19th Amendment, she declared, “While I may be the first woman in this office, I will not be the last — because every little girl watching tonight sees that this is a country of possibilities.” The viral image by artist Bria Goeller of a striding Kamala Harris casting the shadow of desegregation icon Ruby Bridges reminds us of the histories represented in this moment.

We can launch timely classroom conversations about representational significance (including the fact that we’ll have a first second-gentleman who is also Jewish) by asking our students, “Do you agree with the claim that ‘you can’t be what you can’t see?’ Discuss!” My experience with college students has been similar to Kalyn Prince’s in her description of students who are moved to apply rhetorical insights to the wider world as advocates.

With that in mind, you might also invite students to consider the power of citational representation, as we writers decide whose voices to include in our written conversations. I have been inspired by the Cite Black Women Collective in my own work and have introduced students to the principle of mindfully including a diversity of voices in every scholarly conversation. Citations are a core power move in scholarship, whether or not writers are conscious of this fact. We can help students understand that the decisions they make as writers, even at the level of citation, can have ripple effects. Quotation is about inclusion. Citation is about representation.

As instructors, we can commit, now, to decolonizing our spring syllabi, breaking open our schedule to include more voices, and discussing with our students the rationale behind the decisions we make about classroom texts. I’m inspired by Susan Bernstein’s post on “Centering Black Lives,” and I would love to hear what is working in your classrooms and your plans for the coming semester.

Regardless of our students’ partisan leanings, we all likely share an ideal of a “country of possibilities.” What our students can learn from you is that their decisions about which quotations to include in their writing are the work of making that ideal a reality.