Remixing To Kill a Mockingbird

What would happen if Scout, Jem, Dill, and Atticus had Instagram accounts? One of the students in my Writing and Digital Media course decided to find out for her Remix a Story project.

I have talked about the remix project when I shared Tools for Faking Social Media earlier this year. In this project, I ask students to choose a story (fiction or nonfiction) and retell that story using digital composing tools. One of my students, Emily, has loved To Kill a Mockingbird since she first read the book in high school, so she decided to focus on the novel for her project. With To Kill a Mockingbird in the news recently, due to the publication this month of Harper Lee’s Go Set a Watchman, it seems like the perfect time to share her wonderful work, with her permission, of course. 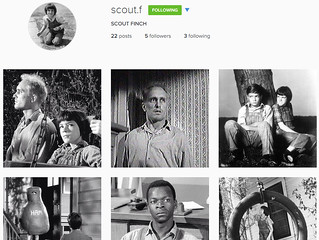 Emily used photos from the 1962 movie for most of Scout’s Instagram photos, supplementing some drawings presented as the work of other characters from the novel. My favorite image is the YOLO (which stands for “You Only Live Once”) image at the top of this post, where Emily combined different photos from the movie with her own text, styled like a meme.

In addition to finding the images and arranging them so they posted in chronological order, Emily created Instagram accounts for Jem, Dill, and Atticus. She used these additional accounts to create comments and interaction on Scout’s Instagram photos. In the example below, Jem and Atticus like Scout’s post while Dill and Scout exchange comments (click on the image to see a larger version): 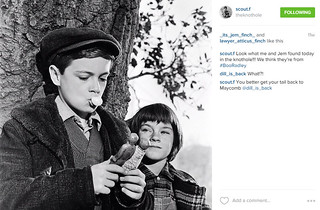 In the stream of comments for the images, Emily refers to popular social media practices like selfies, Throwback Thursday, and hashtags.

Naturally, Emily began her project by collecting the images and then creating a mockup, using resources from our class textbook, Writer/Designer. Her mockup was created as a PowerPoint slide show, with the different images each on a slide and with rough versions of the comments beside each image: 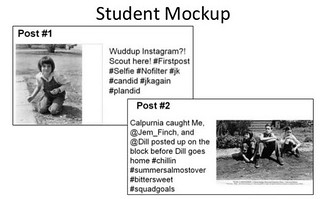 So now you know what would happen if Scout had an Instagram account. Emily put in a lot of work on the project, and her love for the text really shows. I smile every time I look at this piece. What student projects make you smile? Share one with me in the comments below or drop by my page on Facebook or Google+.