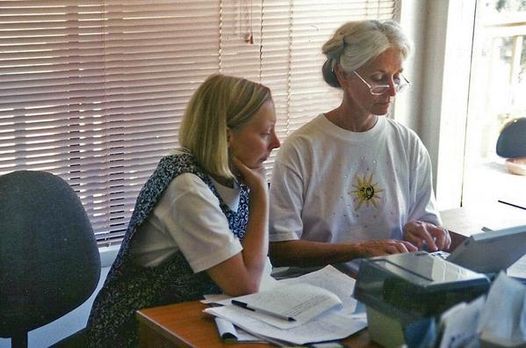 On September 29, 2021, twenty days after her 74th birthday, Lisa Ede shuffled off this mortal coil, the field of rhetoric and writing studies lost one of its bright lights, and I… well, I lost the friend of a lifetime. In the few days since her death, I have been heartened by the outpouring of tributes and testimonies from friends and colleagues across the country and beyond, by all those who spoke of what Lisa and her work meant to them and of the many acts of kindness, mentorship, and unflagging support she was so well known for. And I’ve smiled through tears as I remember Marvin Diogenes saying “Lisa gives the best hugs.” She did indeed. And so much more.

Lisa and I met in the fall of 1972 when I arrived at Ohio State to begin my Ph.D. Though I was five years older, Lisa was ahead of me by two years (and in more ways than one!) and like everyone else there at the time, she was focusing on literature. Back then, she was a Victorianist, and went on to write her dissertation on Lewis Carroll and the “nonsense” poets. But change was in the air, and when a few grad students started agitating for courses on rhetoric and writing, Lisa got more and more interested. She went on to study with Edward P. J. Corbett and with Richard Young in an NEH Seminar devoted to invention, and then landed a position in writing studies at SUNY Brockport before moving west to join the faculty at Oregon State and develop the writing program and the legendary Center for Writing and Learning there. Along the way, she published seminal essays on authorship, on collaboration, on audience, and on writing center theory and practice, as well as important textbooks. Also along the way, she was honored with the CCCC Braddock Award, with the MLA Mina Shaughnessy Award, with an Oregon State symposium on her work, and with the Lisa Ede Mentoring Award given by the Coalition of Feminist Scholars in the History of Rhetoric and Composition.

These are the bare outlines of a rich and full career. As I grieve for her now, I think of that career, to be sure, but I think of so many other small, everyday moments of her life.

Of the evening, probably forty+ years ago, when Lisa and I and several others were gathered at her and Greg’s house and we found ourselves pulling out the print version of the Oxford English Dictionary to settle an argument over the definition of wetlands: fens, bogs, mires, swamps, whatever—when the doorbell rang. We all went to open it, dictionary in hand, and Lisa greeted two students who were turning in late essays. They took us in in one sweep and the look on their faces said it all: “So this is what English professors do on Friday nights—read aloud from a gigantic dictionary.” And Lisa, smiling sweetly, shaking their hands, thanking them—and then collapsing with laughter as we shut the door. English professors on Friday nights.

Of the summer we celebrated finishing “Audience Addressed / Audience Invoked” by making FORTY-THREE jars of pesto with basil harvested from Greg’s garden, taking a photo of ourselves sitting proudly behind the fruits of our labor.

Of the weekend we celebrated sending off the revised manuscript of Singular Texts/Plural Authors with a trip to Canned Foods (!), one of Lisa’s favorite haunts in Corvallis. Talk about the big time….

Of the time we spent preparing refreshments to serve at Jon Olson and Cheryl Glenn’s wedding, arguing over ingredients and recipes and especially over how many of this or that we should make—and loving every single second of it.

And of the darkest time of my life, when Lisa was there, with compassion, wisdom, and the steadiness that pulled me through.

In the days since her death, I have been drawn to a poem Lisa loved, one we often recited together, called the “The Peace of Wild Things” by Wendell Berry. You can click here to read the poem in its entirety, but I will include a short excerpt here: “When despair for the world grows in me // I come into the peace of wild things  // I rest in the grace of the world, and am free.”

What I wish tonight, for all teachers of writing everywhere, is that you have a friend like Lisa—and that you can, as often as possible, rest in the grace of the world.