On a recent Saturday in September, I attended a neighborhood street fair in Queens, New York. Since it was the day before the beginning of Banned Books Week, my local bookstore offered a table to support and sell banned books. The table included a selection of the most frequently banned books, postcards to support the authors and publishers of banned books, and a tablet with a link to the  PEN America's Index of School Book Bans (July 1, 2021 - June 30, 2022). There are 2,435 titles on Pen America’s list, beginning with Ace of Spades by Faridah Àbíké-Íyímídé and ending with Grandpa Cacao: A Tale of Chocolate, from Farm to Family by  Elizabeth Zunon. The books are banned, challenged, and being investigated in schools and libraries across the United States.

In scanning the list, as well as the American Library Association’s lists of Top Ten Most Challenged Books, I found books I remembered very well. There were books I taught in my  first-year writing and literature classes, books I had given as birthday gifts to young relatives assigned by my high school teachers, and books I read for my doctoral comprehensive exams. The list also offered my memories of my first encounters with some of the books in question. At the street fair, I offered my first memory of realizing that book bans existed back in junior high in the early 1970s at my town’s public library in suburban Chicago.

One afternoon, I brought my books to the library’s front desk to be stamped with the due date, only to be met with resistance. “You can’t check those books out,” the librarian said. “Why not?” I asked. “Because these are adult books and children are not allowed to check out books from the adult stacks.” Again I asked why, but the explanation was vague and dismissive. I left without the books. But a few weeks later, I discovered them back on the shelves, and for many visits afterward I found cozy and secluded sections of the adult stacks, and I read the books I wasn’t allowed to read.

I could not stop asking why. Why did the library not allow a tween or young teen to check out books from the adult stacks? The books I wanted to read had no provocative pictures, no offensive language. Mostly I wanted to read history. There were gaps in the school curriculum that needed filling. For instance, there were no lessons about race, class, or gender, and no indication that our textbooks contained contradictory information.

For instance, I learned U.S. history from the perspective of colonizers, not the colonized. After the Civil War, the textbooks said, carpetbaggers and other outsiders from the North tried to change the way of life in the South, but ultimately the carpetbaggers weren’t successful. However, there was no mention that Northerners tried to eliminate a way of life that included lynching, convict leasing, and other forms of de facto slavery. My reading in the adult stacks was a revelation, and having to hide this reading from the librarians was deeply disconcerting.

In high school, there were limited changes, but still more censorship. The sex education classes focused on menstruation (for girls only), reproduction, and sexually transmitted diseases. The complexities of gender, and the basics of sexual assault, rape, consent, birth control, and abortion, if addressed at all, were perfunctory and confusing. But there were other means of discovering information, and this happened through several books that are now on the Pen America list. This discovery begins with Brave New World, an assigned reading for my first-year high school English class. I did not yet have enough background to fully comprehend Aldous Huxley’s dystopia, and the links between the disturbing images in the book, and the disturbances unfolding in the early 1970s. Because of this disconnect, I could not find a way to process the messages of the book.

However, another dystopian world was unraveling below my desk. Someone in the class had procured a copy of another banned book, Go Ask Alice: A Real Diary.  We carefully passed the text back and forth among students, underneath the desks and beneath the teacher’s line of vision. Alice’s diary dealt with sex and sexual violence, drug addiction, and rebelling against parental authority. Even as Alice’s diary turned out to be fake, the topics it addressed were deeply intriguing to me and, before the internet, scant information about them was available to me through my health classes, my family, or the public library. Our Bodies, Ourselves, yet another banned book in print at this time, addressed all these topics and more; . however, I was unaware of its existence until my sophomore year of college.

A few years after Go Ask Alice, I encountered I Know Why the Caged Bird Sings in the high school library. I still remember the front cover of that book. Showing through the clear protective plastic against a red-orange background was a blackbird soaring upward from the sun. Finding this book in the library was life changing, as it was the first book I ever encountered that centered Black lives. Angelou was part of the same generation as my parents and many of my teachers. Yet Angelou’s first memoir of racism, poverty, sexual assault, segregation, Black community, and Black joy was never listed as a text or acknowledged throughout the entirety of my schooling. I bought my own paperback copy and reread it often, even as the book is yet another entry on the Pen America list. 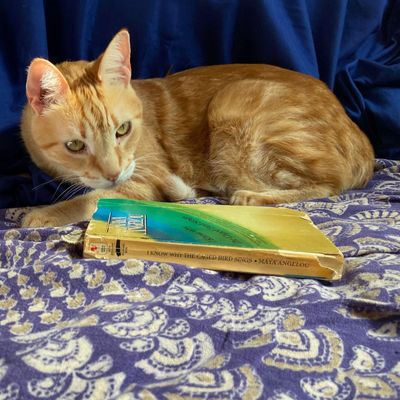 Destiny, an orange tabby cat, sits next to a paperback copy of a banned book: Maya Angelou’s I Know Why the Caged Bird Sings. Photo by Susan Bernstein.

The lesson I learn from the experiences of reading all of these books, then and now, is that I could not rely on school for my education, because the parameters of what was acceptable, or what counted as literature, were narrow and opaque. Even as white privilege shapes my view, the current book bans, although not supported by a majority of people, attempt to replicate perspectives of everyday life that are as insufficient and constricted as the views I encountered in and out of school half a century ago. The banned books that lifted me out of that restricted thinking changed my world, and allowed me to understand two contradictory ideas: First, I was not the first young girl in history to suffer the tribulations of coming of age. Second, I needed and still need to interrogate my own privileges as I continue the lifelong work of building beloved community.

Read banned books, teach them, and absorb what they have to offer. The lessons might not seem immediately clear, but processing them over time and distance can open the heart and the imagination to new possibilities.