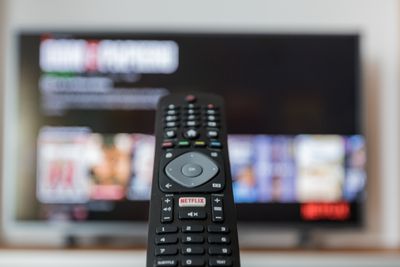 As I continue to ponder the increasing division between Americans along cultural and ideological lines, I am struck by a parallel division within media coverage of what's hot and what's not in contemporary entertainment, especially in television. My own usual sources for information—the Atlantic, the L.A. Times, Slate, Vox, and similar sites—are filled with stories on high-buzz programs like "Better Call Saul," "Squid Game," "House of the Dragon," "Rings of Power," "Yellow Jackets," and so on, while the Emmy Awards continue to highlight such high-profile favorites as "The White Lotus," "Ted Lasso," "Succession," "Ru Paul's Drag Race," "Lizzo's Watch Out for the Big Grrrls," and "Queer Eye." Finding information and commentary on series that lie outside what is largely a "blue state" entertainment universe, however, takes some effort. Sure, I can look at the Netflix lineup; but, even with such popular programs as "Bridgerton," “Peaky Blinders," and "The Empress," nothing from Netflix, as I noted in my blog post "'This is Us": How Television Ratings Reflect Cultural Trends" appears in the top Variety television ratings for 2021. Obviously, if I frequented the kind of social media sites which skew towards a more "red state" user base, I would find a lot more information on what's happening outside of my own cultural silo. But that, I am finding, is going to take some research.

A few days ago, I came across an online discussion concerning the RTV show "Gold Rush," which appeared on a hobby site I visit now and then (the general ideology of the site can be indicated by the fact that any discussion of global warming is forbidden there). I took note of it, beginning with the fact that I had never heard of the aforementioned show.  I then did some quick research.

As it turns out, "Gold Rush" is a long-running Discovery Channel series (related to shows like "Ice Road Truckers" and "Deadliest Catch)" that initially premiered in 2010 as "Gold Rush: Alaska." It follows the adventures of a group of unemployed Oregonians who, without any prior experience in mining, go to Alaska to search for gold. Over the years, it appears that some of them have done very well at it. Now, there are two things about "Gold Rush" that particularly interest me: The first is that the original protagonists of the show were victims of the Great Recession, and the second is that the show is wildly popular with its audience.

Let's begin with its popularity. As Anna Runa put it on PopCulture.com in 2020, "'Gold Rush' has had a serious surge in ratings, as the Discovery mining franchise has dominated cable ratings with now four of the five top cable series among people ages 25-54 and men 25-54 …driving Discovery to the top 3 most social primetime cable networks, excluding news" ('Gold Rush' Dominates Cable Ratings After 'Parker's Trail' Return, Catch an Exclusive Season Preview). This is quite an accomplishment, garnering a viewership encompassing a particularly coveted viewer demographic, and yet you don't hear about the show if the sources of your information are limited to the usual high-profile national media outlets—at least I haven't.

The significance in all of this goes back to a problem that I have been exploring in a number of my Bits blogs recently: the way that a great deal of American popular culture is going under the radar of most professional culture critics, journalists, and academics. This matters, as I have said, because the study of popular culture is one of the best ways available to get a clear understanding of where our society stands as well as where it is going. If we are missing a sizable segment of that culture, then we are not going to get an accurate picture.

This takes me back to the first thing that struck me about "Gold Rush," which is that it began as an RTV-style documentary on the lives of working people from the Northwest, who were set adrift by the Great Recession. There are many things that one can say about such a show—the way it celebrates traditional "frontier" values, for example, or its disregard of the environmental havoc that all forms of natural resource extraction inevitably have on the environment. Its attention to the lives of people who were victimized by an economic catastrophe that largely left the upper classes unscathed, in particular, addresses a class-based experience that popular culture in America tends to sweep under the rug. Whoever they are, the protagonists of "Gold Rush" aren't the Kardashians—and that’s significant.

It is apparent that "Gold Rush" tells a story that is mostly being heard by those who already know it too well. This story could also be seen as a signifier of the vast wave of political populism that has swept America in the wake of the Great Recession. The misalignment between its loyal base of viewers and the lack of chatter surrounding it in popular media coverage is why it warrants cultural-semiotic attention and analysis.

Photo by Piotr Cichosz (2020) used under the Unsplash License.