Political Memes from the Internet to Protest Posters

As I have written in my last two posts, I presented on the ways that image macro memes (the memes that usually consist of an image and a text caption) at the Computers and Writing Conference in June. Specifically, I focused on political memes and how these memes are a form of activism as the people who make and share them spread their message.

As Limor Shifman explains in her book Memes in Digital Culture (2014), memes are a way of expressing opinions in political conversations, undertaking advocacy and grassroots action, and participating in political movements. Given these functions, political memes are perfect for the classroom: They ask students to use critical analysis, persuasion, and argument in authentic conversations.

Encourage students to think about the use of memes beyond Internet sharing by examining this version of the Distracted Boyfriend meme, updated to focus on gun control: 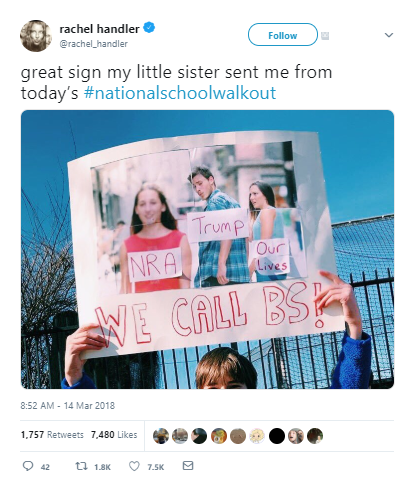 The meme was shared in a Tweet from @rachel_handler. It shows the distracted boyfriend with the object label “Trump,” looking back at the woman in red who is labeled “NRA,” while his girlfriend who is labeled “Our Lives” looks at him in disgust. Under the meme, the political protest poster states, “We call BS!” The text of the Tweet provides the context where the meme was shared: “great sign my little sister sent me from today’s #nationalschoolwalkout pic.twitter.com/i0WqRMdaDF.”

What interests me about this image is that the Internet meme is no longer bound by the Internet. Instead, as was also the case with the Grumpy Cat protest poster I shared previously, the meme has been recreated in an analog world, printed out in this case and glued to a piece of poster paper with an additional line (“We call BS!”) to emphasize the message.

The shift from Internet meme to protest poster seems a natural one. What works for political advocacy online can make a similarly strong message in an analog situation. While some Internet memes would not translate to nondigital messages (think of animated gifs and memetic videos), image macros make the transition smoothly. For more examples of memes on protest posters, check out the Medium post “Teens March With Memes.”

After students examine a meme that has crossed from the Internet to an analog existence, ask students to consider these questions:

As you may guess, these question work students toward creating a rubric for effective memes, which can then be applied to their own political memes. My post last week offered a range of online tools that students can use to create memes.

Do you have ideas for using memes in the classroom? Do you have questions that you would like me to consider in an upcoming post about memes? Just let me know by leaving a comment below. I can’t wait to hear from you.