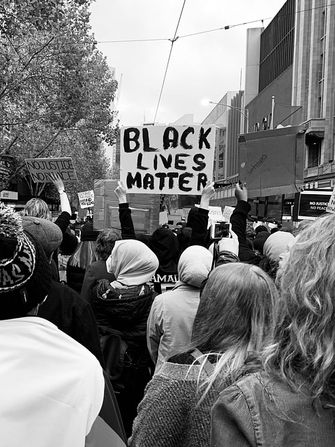 You may have noticed that the Bedford Bits blog has undergone a recent update. I unfortunately wasn’t able to post while the site was being updated, but I wanted to make sure I posted one more time before taking a break from blogging for the summer. And so, I am writing this post on June 6, twelve days after the murder of George Floyd at the hands of police officers in Minneapolis. I have wept and grieved, contributed to Black Lives Matter and the Atlanta Solidarity Fund, marched while keeping a distance and wearing a mask in the little village I live near in northern California, and looked into my heart, searching for my own unacknowledged racism.

And I’ve listened to the eloquent young people telling us of their suffering, of their relentless, ongoing fear, of their emotional and physical exhaustion. And I’ve been remembering the decades of protests telling us the very same thing, over and over and over.

Perhaps this time is a movement rather than a “moment.” Perhaps we are at a watershed. I hope that we are and that students in the coming years will be able to write and speak about civil rights and about police reform and about social justice in a more hopeful, less exhausted way.

And when they do, I hope they will look back not only on today, but to events from the 1960s, and particularly to this day 55 years ago, on June 6, 1965, when President Johnson signed the Voting Rights Act, three months after Martin Luther King Jr. led the Selma to Montgomery “Bloody Sunday” march. I’ve spent most of the day revisiting that year, and those leading up to it, and especially listening to the words of Dr. King.

Surely it’s no coincidence that today I received a message about that year from the Kronos Quartet, whose work for peace and justice is now in its 46th year. During the pandemic, Kronos—like all arts groups—has been unable to perform live. But they have not been resting. Rather, they have been searching for new ways to continue their work. So on this day, June 6, 2020, they released a recorded video excerpt from Zachary Watkins’s Peace Be Till, a piece commissioned and performed by Kronos featuring words from Dr. King’s “Letter from Birmingham Jail,” that “symphony for social justice,” as Clarence Jones described it.

Jones, now nearing 90 and King’s friend, speech writer, and counsel, was there on August 28, 1963, on the steps of the Lincoln Memorial, watching and listening as King began to speak, only to pause as Mahalia Jackson, near him on the stage, called out “Tell them about the dream, Martin; tell them about the dream.” And Jones watched as King discarded prepared marks and launched into his unforgettable “I Have a Dream” speech. As Jones remembers it, he turned to the person next to him and said “that sea of folks out there better get ready, because they’re fixin’ to hear a sermon.” It was a sermon for the ages, one that helped to bend the arc of history.

I hope you will take a few minutes to revisit that time and place and to hear Clarence Jones read Martin Luther King Jr.’s words, accompanied by Kronos playing Watkins’s powerful score and by a searing series of images from the time. I hope that you will share it with your students and ask them to write about what “I Have a Dream” means to them today. I hope that you will ask them to write about what the current movement can mean to the future of our country.