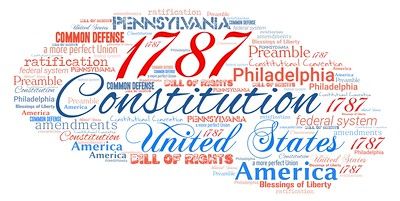 In 1987 the United States celebrated the 200th birthday of the Constitution. In a famous speech included in Elements of Argument, Thurgood Marshall, the first African American to serve on the Supreme Court, explained why his celebration of the anniversary was reserved. He wrote, “I do not believe that the meaning of the Constitution was forever ‘fixed’ at the Philadelphia Convention. Nor do I find the wisdom, foresight, and sense of justice exhibited by the Framers particularly profound. To the contrary, the government they devised was defective from the start, requiring several amendments, a civil war, and momentous social transformation to attain the system of constitutional government, and its respect for the individual freedoms and human rights, we hold as fundamental today. When contemporary Americans cite ‘The Constitution,’ they invoke a concept that is vastly different from what the Framers barely began to construct two centuries ago.” He concludes, “Thus, in this bicentennial year, we may not all participate in the festivities with flag-waving fervor. Some may more quietly commemorate the suffering, struggle, and sacrifice that has triumphed over much of what was wrong with the original document, and observe the anniversary with hopes not realized and promises not fulfilled. I plan to celebrate the bicentennial of the Constitution as a living document, including the Bill of Rights and the other amendments protecting individual freedoms and human rights.”

Thirty-five years later, we sometimes hear the term “constitutional crisis.” The term refers to a problem that arises within the government that the Constitution is not able to resolve. The inability of the Constitution to handle every situation that arises is exactly why Marshall celebrated it as a “living” document, one that has been revised as necessary to keep up with the changes that over 200 years of national history have brought. Some of these changes were the inevitable result of positive societal change. The Civil War was fought to prove that we were no longer a nation that defined some of its citizens as only three-fifths of a person. Marshall writes:

Along the way, new constitutional principles have emerged to meet the challenges of a changing society. The progress has been dramatic, and it will continue. The men who gathered in Philadelphia in 1787 could not have envisioned these changes. They could not have imagined, nor would they have accepted, that the document they were drafting would one day be construed by a Supreme Court to which had been appointed a woman and the descendent of an African slave. ‘We the People’ no longer enslave, but the credit does not belong to the Framers. It belongs to those who refused to acquiesce in outdated notions of ‘liberty,’ ‘justice,’ and ‘equality,’ and who strived to better them.

Nothing has revealed more clearly “outdated notions of ‘liberty,’ ‘justice,’ and ‘equality,’” and the political split that exists in our country, than the confirmation hearing of Supreme Court nominee Ketanji Brown Jackson.  There was a time not all that long ago that a well-qualified candidate could be approved by a large majority in Congress across party lines. The Framers did not intend for an individual to be elevated to our highest court and to serve there for life on the basis of his or her position on a single issue nor did they intend for a nominee to be approved or not by a vote along party lines. Short of a constitutional change, legislation that would change the makeup of the Court would allow the party in power to “pack” it—in this case, to increase the number of justices from nine to thirteen to allow Democrats to balance the conservative justices appointed under former president Donald Trump. However, in April of 2021, President Biden put in place a commission made up of law professors to study how to make constitutional changes in the Supreme Court.

Perhaps the Framers did not foresee the power of partisanship as it has evolved over the intervening years. The policy change that our nation seems headed toward is a major constitutional change in our country’s highest court, the type of change that Marshall celebrated as evidence that our Constitution is a living document.