On Emojis and Emoticons 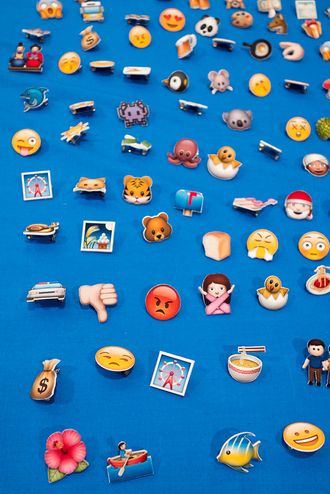 I’ve just been reading about the 37 new emojis accepted by the Unicode Consortium’s Unicode 14.0, including “melting face” and “biting lip,” two that seem particularly apropos for these pandemic-haunted, divisive times. Looking at all the new options, I realized that I didn’t know much about where emojis came from, or how they are related to emoticons—if at all. It was time for a little browsing on the internet, where I quickly reminded myself of the distinction between the two.

As no doubt everyone but me knows, emoticons—typographical representation of facial expressions—have a long history, but they seem to have entered the age of the internet sometime in 1982 when Scott Fahlman, a Carnegie Mellon professor of computer science, suggested using :-) and :-( to signal the difference between a joke and a serious statement in online communication. Later, these representations became known as “emoticons,” a portmanteau word combining “emotion” and “icon.” Now that I think of it, I do remember having some fun seeing what expressions could be generated with just my computer keys.

Emojis, on the other hand, can be traced back to a late 1990s Japanese communications company, and their name is based on a contraction of e and moji (roughly “pictographs”). Inspired by manga, interface designer Shigetaka Kurita created the original set of 176 emojis, now part of the Museum of Modern Art’s collection.

In one way, emoticons and emojis are contemporary forms of punctuation, signaling emphasis and expressing and underscoring emotions. In any case, certainly they are a staple of online communication today. But here’s my question: are writing teachers now advising students on when and where and how to use these marks? Is an emoji worth a thousand words? When might that be so—and when might it not?

It’s at times like these that I hate being retired. Just a couple of years ago, I could have walked to class and gathered information from my students on the spot. Stanford now is a four hour drive away—and I haven’t been on campus since the pandemic began. But I can contact students virtually, so I am going to start asking them in detail about their use of emojis and emoticons—and do some more reading and research on these increasingly ubiquitous marks. In the meantime, I would be very grateful to hear from anyone who has done some of this research or who has advice for writers about their use. Please share!