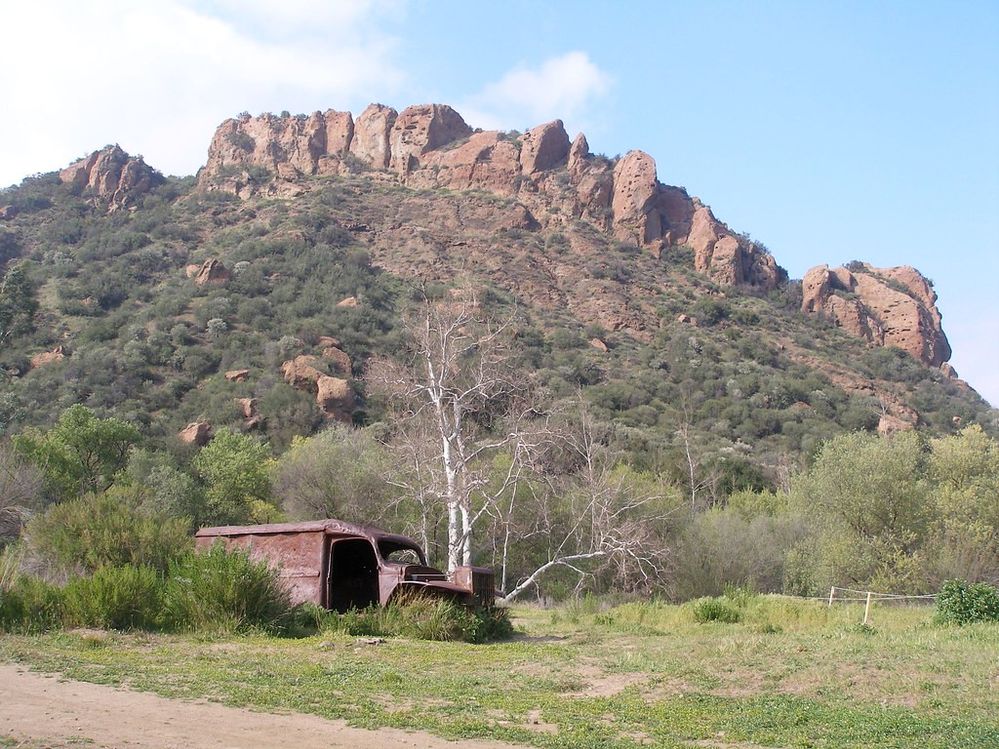 Lately I have been spending a lot of time in Malibu Creek State Park, a spectacular setting popular with deer, coyotes, skunks, mallards, geese, herons, hikers, runners, rock climbers, mountain bikers, and movie/TV buffs—the latter due to the many productions whose outdoor scenes have been filmed here over the years on what used to be land owned by 20th Century Fox. Visitors may recognize scenic backdrops from cinematic classics such as How Green Was My Valley, Planet of the Apes, and (most famously) M*A*S*H—both the movie and television spinoff. While I am tempted to write here about the tricky passage from the park's Century Lake to the M*A*S*H filming site (tricky, at least, for a sixty-something man on a mountain bike), that topic isn't really pertinent to a cultural-semiotic analysis. The M*A*S*H franchise, on the other hand, most certainly is. So here goes.

As with most semiotic analyses, the key to the analysis begins in a difference, in this case, the difference between the popular movie of 1970 and the even more popular television series of 1972-1983 (for the sake of brevity, I am not including the 1968 novel upon which both the movie and the series were based). To begin with, then, in the days before subscription networks like HBO broke through the limitations placed upon commercial television, M*A*S*H the movie could be much raunchier, and gorier, than the TV series ever could be. The differences between the two in that respect signify just how much things have changed since the 1970s, with TV fare like The Sopranos and Game of Thrones pushing boundaries that not even the movies dared to explore fifty years ago. Much more significantly, the blatant sexism of M*A*S*H the movie was considerably toned down in the television version, reflecting (especially as the series developed) the growing influence of the women's movement on American popular culture through the course of the decade. Any extended analysis of the M*A*S*H franchise would accordingly need to take both of these differences into account.

But my focus here will be upon another difference, the difference, that is to say, between the way that the movie and the series mediated America's experience of the Vietnam War, for while both were clearly understood as metaphors for that war, their takes on it were quite distinct from one another. The movie presented a sharp satirical attack on the conduct of an increasingly unpopular war as U.S. Army officials led their unwilling conscripts into harm’s way. The series, on the other hand, softened that attack considerably (the development of the character of Colonel Sherman T. Potter—who does not appear in the film—is particularly striking in this respect) to focus instead on a more generic anti-war sentiment.

This gentling down of the film's biting satire is probably what most accounts for the immense success of the TV series, a success reflected in the fact that 105.9 million viewers (almost half of the U.S. population at the time) tuned in for its final episode, even though, unlike television series such as The X-Files and Lost, it had no tangled webs to unweave, nor, unlike shows such as Game of Thrones, did it have a complex, series-long plot line to bring to a conclusion. In the series finale, the Korean War simply ends and the characters head home. But the broad sweep of its final audience shows how M*A*S*H managed to bring together tens of millions of Americans who, not so very long before, had been bitterly divided by a failed war—and the larger cultural conflicts that accompanied that failure.

This achievement was not accomplished by accident, for the M*A*S*H series went out of its way to give something to almost everyone. For those who had opposed the Vietnam War, it maintained the anti-war vibe of the movie, along with a gentler version of its sixties-style attacks on military authority. But for those who resented the anti-Vietnam War movement, there was that far less caustic, much more simply comedic, take on the armed services, with a fatherly Colonel Potter and a buffoonish Major Frank Burns (face it, Larry Linville was no Robert Duvall) to soothe them. And, probably most important of all, there was Alan Alda (no Donald Sutherland was he) as Hawkeye Pierce, irreverent and full of mischief but ultimately a sentimental and even reassuring emotional anchor through eleven seasons. The role that would establish Alda as the face of a new kind of masculinity: the so-called “sensitive man of the 1970s.”

Thus M*A*S*H the TV show mediated and reflected the social movement of a decade when America pulled back from the tumults of the sixties, softening many of the sharp edges of that more revolutionary time (those now-ridiculed male hairstyles were long-hair lite, while seventies-style "soft rock" speaks for itself) as the counter-culture came of age and joined the Establishment—a process that would find its own reflection in 1983's The Big Chill.

But there were other historical processes at work, because even as Americans gathered around the small screen for the final episode of M*A*S*H, a counter-revolution was already underway. The Reagan era had begun, and with it a continuation of the culture wars that had pulled America apart in the sixties, and which continue to divide the country into ever-more-hostile camps. And it is highly unlikely—if not flat out impossible—that any television series today (or, for that matter, any artifact of popular culture), could ever achieve what M*A*S*H managed to achieve: a brief moment of cultural concord.