Lessons on Communication and Writing from a Physical Rehab Center 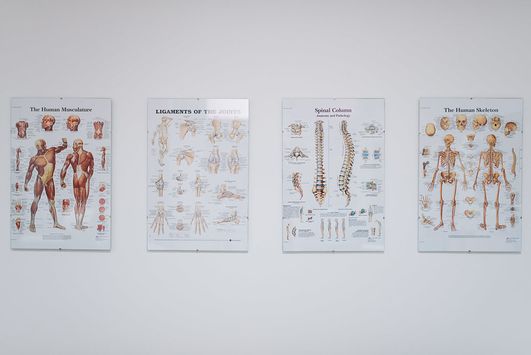 In the midst of a wave of the COVID Delta variant, I took a fall and ended up in the emergency room of a hospital, where I spent the night waiting for a bed in what turned out to be a closet in the outpatient wing: there was not a single bed available elsewhere. In spite of being overwhelmed with patients, the staff were kind, caring, and attentive, managing x-rays and CT scans and other test with patience and skill and transferring me within three days to a skilled nursing facility nearby. Once settled in the new place, I had a chance to look at the written records that accompanied me, and to remark on the thoroughness and accuracy of the reports, including descriptions of the fractures and notes about my allergies to pain medication: some fine pieces of writing, I thought!

I spent the next three weeks in a rehab center, and being the rhetorician that I am, I paid close attention to all the communicating I saw going on around me, both spoken and written. And in this time of almost unbelievable division and hostility in our country, of the avalanche of misinformation descending on us on social media, and of the increasingly bitter attacks and counterattacks regarding the recall of our governor here in California—I learned lessons in kindness, dignity, grace, and forbearance. I’ll share just two of these lessons here.

The building I was in was a big rectangle, and once I was in a wheelchair, I could wheel from hall to hall, where I watched staff at work. Other patients did the same, including one woman with advanced dementia, whose soft smile and voice greeted me often. She would wheel slowly by, often talking about things that seemed to deal with numbers, or economics, and addressed, it seemed, primarily to herself. I later learned that she had been a long-time math teacher. She was hardly ever in her room, preferring to roam about the facility—and she had a penchant for going into any door that was open or that she could open: one night I woke to find she had wheeled into my room and was sitting inside the door, singing to herself. So the staff could have trouble keeping track of this patient, and when they located her she would often resist going back to her room.

As I watched this pattern repeat, I was impressed (and more than a little humbled) by the staff members’ ability to talk with her quietly, kindly, and always respectfully, suggesting that she might want to share a cup of hot chocolate, to listen to music, or to roll around with one of the assistants as a companion—and eventually, ever so gently accompany her to her room and, at night, help her with washing and undressing and getting into bed.

The way the staff spoke—as well as what they said—impressed me deeply: it was a kind of communication, a lot of it nonverbal, that I think characterizes the best teaching, and it has a persuasive power all its own. As I came to know the place better, I realized that some staff were more highly skilled at this kind of communication than others, but oh how I wished that all of us teachers could have a chance to learn from them and to pass on some of their expertise to our students.

And then there was a nurses’ assistant that I will refer to as Maria. I met her my first night there, as she was cajoling a patient into eating just a bit more of her dinner, but I didn’t get to talk with her until a few days later, when she came into my room as she said “early, ahead of her schedule, to ask a question.” She had seen two books by my bed—The Everyday Writer, which I’m working on revising, and a book of poems by Rita Dove—and she wanted to ask about writing, specifically about her writing.

As her story unfolded, I learned that she had come to this country with her mother and siblings to join her father, then working in the fields, when she was a child. In those days they had all managed to come legally, and they settled in to working in four areas of California, in order of crop rotation. Maria did not go to school until she was 14, and then she found herself in a public classroom, with little English and a lot of anxiety. But she also had a lot of curiosity, which her English teacher noticed. One day, the teacher asked her to stay behind at the end of class and offered a deal: if Maria would work hard, the teacher would stay after school 2 to 3 hours a day to teach her English. Maria did work hard—very, very hard. One day, her teacher said she wanted to take Maria somewhere on the weekend but Maria demurred, saying she didn’t think her father would allow it. He agreed, however, and Maria found herself at a high school graduation, something she had never heard of and could scarcely imagine. She set her sights on such a graduation, and with the ongoing support of her teacher, she graduated with fine grades and got a good job. Eventually, she completed the college work necessary to become a certified nurse’s assistant. But all the while, she told me, she was “telling stories,” writing them in both Spanish and English, and dreaming of doing more.

I gave Maria The Everyday Writer and another book I had with me, Gloria Anzaldua’s Borderlands/La Frontera, and I’ve sent a few more books since I got home. She has written that she hopes to visit soon, and that she will bring some of her stories with her. And that she continues to write, every single day.

In the wake of the 20th anniversary of 9/11, I have felt . . . discouraged. But even on a dark day filled with dark memories and darker grief, I remember the lessons I have learned from Maria, from the remarkable staff of the rehab center, and from so many students: the work we do has meaning, far beyond what we may ever know.

Image Credit: "Posters of Muscular and skeletal systems anatomy chart in hospital" by shixart1985, used under a CC BY 2.0 license