In the article “These College Students Don’t Like the System They’re In,” New York Times journalists Patrick Healy and Adrian J. Rivera convened a panel of twelve college students from diverse locations, political opinions, and race and class backgrounds to discuss and “describe how it feels to be in college right now.” Three out of twelve students offered tentatively optimistic responses. The remaining nine students gave pessimistic responses. Four of the students used words that suggested they felt invisible. The breakdown looks like this:

I want to suggest that these words, highlighted for impact, are not unique to this generation of students, and are not necessarily or completely caused by the learning conditions of the pandemic. As a struggling undergraduate student in a very different time and place, I remember those feelings of invisibility keenly and painfully. For example:

Decades later, I can now view these examples from a teacher’s perspective. Speaking to my younger self I would reply:

However, I recognize that none of these responses would have been satisfying. I was an undergraduate far from home accruing debt with every passing day. The explanations from an instructional perspective might have been helpful, but they would not have solved the immediate problem I was having–that learning in conventional college classrooms limited to lectures and assessments did not work for my hands-on learning processes. I could have withstood a healthy mixture of traditional and nontraditional learning, but that is not what I ended up paying for. In fact, I often felt invisible.

My hope as a teacher is to become mindful of how easy it can be for students to feel invisible, and to try to recalibrate my teaching as necessary. This is challenging and necessary work in difficult times. My ongoing goal, which is always in process, is to remain open to learning and growing with my students. 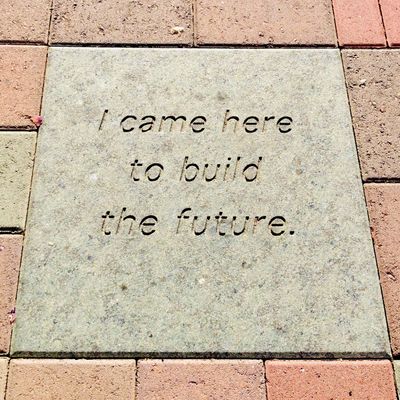 I came here to build the future. Inscription on a rectangular light-colored stone surrounded by red flagstones.