Language in Our Orwellian Times 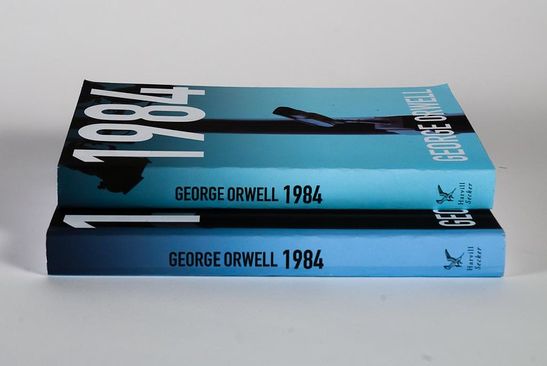 I remember when I first read George Orwell’s Nineteen Eighty-Four, a few years after it was published in 1949—I was 15 maybe, and so young that 1984 seemed a million years away. Unreachable. And to my teenage mind, the nightmare scenario the novel painted seemed far-fetched and outlandish. Unthinkable. When the year 1984 came around, I re-read the book, and of course experienced it completely anew. This time around it seemed prescient and predictive.

I pulled it out this week when I read that the insurrection of January 6 was “legitimate political discourse.” Remember doublethink, the mind control that makes people accept contradictory things simultaneously? In Orwell’s—or his character Winston’s—words, doublethink is

To know and not to know, to be conscious of complete truthfulness while telling carefully constructed lies, to hold simultaneously two opinions which cancelled out, knowing them to be contradictory and believing in both of them, to use logic against logic, to repudiate morality while laying claim to it, to believe that democracy was impossible and that the Party was the guardian of democracy, to forget whatever it was necessary to forget, then to draw it back into memory again at the moment when it was needed, and then promptly to forget it again, and above all, to apply the same process to the process itself. (32)

The mind control of doublethink works together with newspeak, the controlled language that rigorously restricts what people are allowed to say. The control of language leads to and is deeply implicated in the control of thought that characterizes the totalitarian superpower of Oceania.

In 1974, the National Council of Teachers of English was inspired to combine the two terms to create the “Doublespeak Award,” to be given to “a glaring example of deceptive language by a public spokesperson.” The first award went to Colonel David H. E. Opfer, who, after a U.S. bombing raid in Cambodia complained to the press that "You always write it's bombing, bombing, bombing. It's not bombing! It's air support!”

Over the decades, the NCTE has accepted nominations for the “award” and presented it to individuals, groups, corporations, and governments. But perhaps we are now so overwhelmed by efforts at mind and language control that the award seems . . . well, not so much outdated as just outdone. In any case, NCTE has announced a hiatus for the Doublespeak Award:

At this time, NCTE is not accepting nominees for the 2022 Doublespeak Award. We are currently working to re-imagine the award in order to align it with our current mission, vision, values, and policies about the importance of public language and its positive impact on literacy education.

They are, however, “accepting nominations for the Orwell Award, which honors an author, editor, or producer of a print or non-print work that contributes to honesty and clarity in public language.”

Perhaps it is time to focus on positive contributions to public discourse, to call it out and honor it. After all, research has shown over and over again that negativity and misinformation is read and forwarded and retweeted at a much higher rate than language that would garner the Orwell Award. As Jonathan Swift pointed out, “Falsehood flies, and the Truth comes limping after it.” I have found students ready to rise to the occasion of this award, bringing in their nominations for a piece of writing that “contributes to honesty and clarity in public language.” I think this makes a great activity for students, whether done individually or in groups. On one occasion, our entire class submitted a nomination; I wonder now if an entire writing program might do so. How I would love to see the 2022 Orwell Award presented to first-year writing students! Nominations can be sent to publiclangaward@ncte.org, and the very minimal guidelines for nominations can be found here.

Part of me, however, thinks the Doublespeak Award for deceptive language is still needed, to say the very least. So I am looking forward to when NCTE’s Public Language Awareness Committee will complete its reimagining. In the meantime, what would your students’ nominate for a Doublespeak Award? I’d say “legitimate public discourse” as a description of an event that left five dead and hundreds wounded and beaten is a pretty strong contender.