Hip Hop in the Classroom 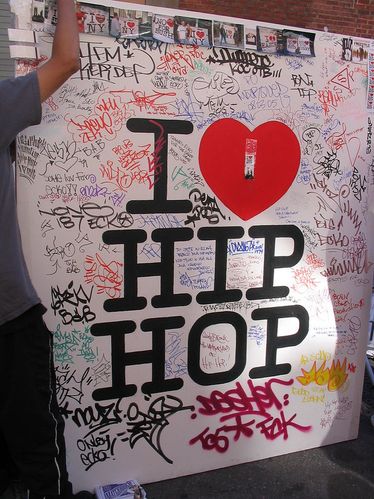 Last week I had an opportunity to join a webinar sponsored by the Institute of Race, Rhetoric, and Literacy, the second in a series on Transgressive WPA Work and featuring David Green, professor and director of first-year writing at Howard University. I have learned so much from listening to Green over the years, including when he participated in the Advisory Board for Diversity, Equity, and Inclusion for the 8th edition of EasyWriter, and this was no exception. He spoke eloquently about Black critical writing practices and the ways in which these practices work to broaden our thinking on academic discourse in general and “the essay” in particular.

Giving a shout out to Adam Banks’s “retirement” of the essay in his tour-de-force 2015 CCCC Chair’s Address, Green offered a number of insights aimed at remaking writing in the academy. Especially intriguing to me was his “Critical Hip Hop Playlist Assignment,” which may already be familiar to all of you. Students select seven texts (or excerpts) from their class—including stories, essays, videos, and images—and seven hip-hop pieces linked in some way to the seven texts and create a playlist that coheres and that can be explained to the class. This kind of assignment, Green told listeners, provides opportunities for “intellectual disruptions” and for extensive “interpretive and critical practice.” Green and other scholars of literacy are providing more and more examples of what it will mean to really retire the “essay” as it has been taught prescriptively in high schools and colleges, and of what students can do to flex their intellectual and linguistic and critical muscles in ways that will generate new understandings of 21st century literacy.

A couple of months before this webinar, Green joined Khirsten Scott and Dennis Winston in a conversation on “Race, Hip-Hop, and Academe” as part of a Los Angeles Review of Books series called “Antiracism in the Contemporary University.” Green kicked off the conversation, noting that,

An often-overlooked entryway into conversations about antiracism, for me, is hip-hop. As a type of African American discourse, hip-hop provides a way, for me, of organizing and arranging these strands of conversations about critical Black writing, community work, as well as responses to oppression.

I see hip-hop as an offspring of Black discourse, . . . [and] I am always interested in the ways that Black vernacular speech practices might help us reimagine particular gatekeeping mechanisms within the university.

Scott, who grew up in the deep South, agreed, saying that for her, hip hop has served as a kind of “survival rhetoric,” in her engagements with academe, especially in graduate school and in her work as a young professor in a primarily white institution:

Hip-hop has consistently given me the language and the embrace I needed in isolating and hostile environments, the bop I needed in joyous moments, and the space I needed to breathe in heavy moments. Just like Blackness, hip-hop is infinitely useful, so I bring it with me everywhere I go.

She goes on to say that she brings hip hop into her classrooms whenever she has a chance to do so and goes on to describe putting together Gil Scott-Heron’s “Comment #1,” Audre Lorde’s “A Litany for Survival,” and the album The Last Poets in order to present hip hop as an artistic form that promotes survival. Pairing the haunting question that ends Heron’s “Comment #1”—“Who will survive in America?”—with Lorde’s quote “It is better to speak remembering that we were never meant to survive,” she says,

has given me license to use Blackness and in this case hip-hop as subject, method, and mode. The infinite utility and possibility of both (Blackness and hip-hop) and the intersections therein allow me to find myself in the US university classroom and to challenge students to locate themselves as well.

Later in the conversation, Green makes a strong case for other assignments based on vernacular forms like Top Five lists and hip hop mixtapes, for the ways these practices allow for critical interpretive moves as well as for “the joys of surviving and thriving.” And he goes on to recount a story about poet Paul Laurence Dunbar, a good friend of Orville and Wilbur Wright, who reportedly wrote a bar on the wall of the Wright bike shop/publishing house claiming “Orville Wright is out of sight,” and thereby, in Green’s words, becoming “an early member of the hip-hop community, if not the first emcee.” (See Keith Gilyard’s “Literacy, Identity, Imagination, Flight” for Gilyard’s telling of this story in the December 2000 issue of CCC.)

In the webinar, David Green also spoke of the importance of memory and remembering, noting the powerful impact of the 1619 Project and of the need for “critical memory.” Using hip hop and other vernacular practices is one way of focusing on memory and on remembering. Toward the end of his conversation with Scott and Winston, Green talked about what it will take to sustain the momentum of the current moment and he invokes Toni Morrison’s concept of “rememory—that is the idea that we must go beyond historical analysis of racial oppression and begin to include an imaginative understanding of the interior values, goals, and beliefs of a people, in order to understand their perspectives.” In ruminating further Green calls for

a more intentional, deeper kind of listening. We need to develop our auditory literacies, or our ability to not just hear what people are saying, but to cultivate a deep understanding of their disappointment or critique. We need an acknowledgment and critical engagement with the full histories of a people and a community.

It strikes me that here Green is speaking powerfully to all of us, to every teacher of writing. In his writings and in his talks, presentations, and interviews/conversations, he is not only calling for deeper listening and increased auditory literacy, but often demonstrating both even as he shows us how to bring these practices into our classrooms.

Once again, I am deeply indebted to imaginative and exemplary colleagues like David Green, Khirsten Scott, and Dennis Winston—and I will continue to seek out every opportunity to learn more from them.

Image Credit: "I Heart Hip Hop" by Lisa Liang, used under a CC BY 2.0 license