Fantasies of Wealth in a New Gilded Age 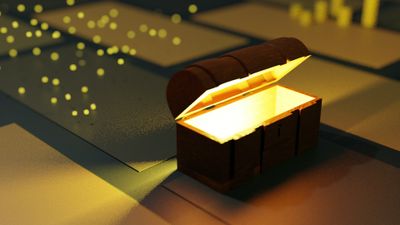 In the third edition of Signs of Life in the USA, Sonia Maasik and I added a new chapter of readings titled “It Was a Dark and Stormy Night: The Codes of Popular Literature.”  We thought that this would offer a useful addition to the usual topics covered in popular cultural textbooks, enabling composition instructors and other adopters of the book to expand their students' awareness of the many windows on American life and consciousness that cultural semiotics can open. As I wrote then, in the introduction to the new chapter, “Whatever the genre, popular texts all have in common the way that they reflect back to their readers what they most desire. This is what makes them entertaining.”

The adopters of the third edition of Signs of Life appear not to have agreed, because that chapter was not used very much during the life of that edition, so Sonia and I did not revive it in subsequent editions. But, as I continue to contemplate what I am calling the “under the radar” dimensions of American popular culture, I think that here is still another place to look for those signs of life in the USA that are not getting sufficient attention.

Of course, best-selling fiction that has been adopted for television and the movies—like how J.R.R. Tolkien and George R.R. Martin have been mined again and again for such purposes--gets plenty of attention. What I am thinking of here, however, is the vast amount of printed literature that somehow always seems to have the label “A New York Times best-seller” boldly displayed on its cover. These are the books that avid readers of popular fiction often are reluctant to admit to enjoying (especially if they are academics!). But as I find myself finally picking up the light reading that Sonia so much enjoyed—and that I could not bear to toss out—I am seeing a glimpse of the semiotic opportunities that pop fiction can offer. What follows is a brief summary of what I have noticed:

Sonia loved detective mysteries, but not violent ones. Her favorite writer in this regard was the late Sue Grafton, but she also liked cat-centered detective novels written by such authors as Lilian Jackson Braun and Ali Brandon, as well as contemporary Swedish procedurals. So that's what I've been reading, along with a rereading of the quite remarkable novel by Peter Hoeg called Smilla's Sense of Snow. And, as disparate as all these books are, I have been struck by a common thread running through all of them: the inclusion of extremely wealthy characters. In Braun’s case this is the protagonist, who has unexpectedly (for him) inherited a billion-dollar fortune, but it could also be a side-kick or an antagonist of some kind. The main thing, it seems, is to have someone around who can enable the author to describe all the perquisites of extreme wealth—the designer mansions, the fancy cars, the personal attendants, the expensive restaurants, the constant travel, the fawning way with which they are treated… and so on and so forth.

It is easy to take this superfluity of riches for granted in popular culture—whether medieval or modern in its setting—because it is everywhere. But this is precisely why we need to question it, asking, “what does this tell us?”

In classical and medieval times, the answer to such a question was easy: rich and powerful characters dominated the literature of those eras because literature (as opposed to the artifacts of folk culture) was created for, and consumed by, the ruling classes. But for a country like the United States, which has always claimed as one of its most cherished values a dedication to “the people”—to the “common man”—a mass cultural fixation on wealth seems contradictory.

And it is, but this very contradiction is fueled by the cherished American mythology that has long been called “The American Dream.” The promise of the American Dream is one of dramatic upward mobility from poverty to riches, not a static existence within the middle class. Thus, we find a paradoxical situation in which the world's first mass middle-class society is ambivalent about itself, ever striving upwards and fantasizing about reaching the socioeconomic top of the heap, whether through personal effort and hard work or, as we often see in popular fiction, an inheritance.

This is not trivial, and it marks a significant shift from the days when American popular culture was largely focused on middle-class protagonists (like the families portrayed during the golden age of the television sit-com, or, for that matter, such middle-class detectives as Raymond Chandler's Philip Marlowe and TV's Columbo). Though there are a few signs that audiences are getting fed up with the increasing divide between America's haves and have-nots—as reflected in the popularity of TV series like “The White Lotus” or the dystopian nightmare of “Squid Game”—there is still a cultural fixation on the rich. This is evident with the topics that dominate the conversation on pop culture today: the warring kings and queens in “Game of Thrones” and “House of the Dragon,” the stately estates of “Downton Abbey” and “Bridgerton,” and the ongoing obsession with the British royal family.

The message is clear enough: consumers of popular culture are turning to fantasies of great wealth, even as the once-cherished American middle-class splinters in the face of a new gilded age.

Photo by Ashin Suresh (2021) used under the Unsplash License.