Esther Milu on Black Language and Teaching ALL Students 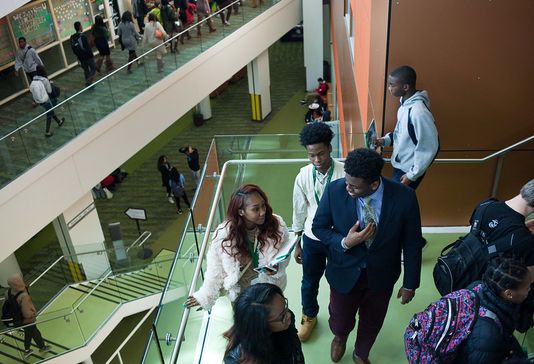 Like many other writing teachers, I have spent much of the last pandemic year reading and learning about how to be more inclusive and equitable in our schools and universities and about how to practice antiracist pedagogy. It’s been a year of the most intensive learning I can remember. As an old(er!) white woman who grew up in the segregated South and came of age in the 60s, that’s saying something: in those early days I confronted my own racist background, my own racism. Or I thought I did. What I’ve learned in the last couple of years is that I have much more work to do and much more to learn about what being inclusive in thinking and teaching really means.

One of the many scholars I’ve learned from this last year is University of Central Florida professor Esther Milu, whose advice as a member of our Advisory Board for Diversity, Equity, and Inclusion for the 8th edition of EasyWriter was so invaluable that I asked if she would have a follow up conversation with me. She graciously agreed, and I remain indebted to her for her perceptive advice and insights. (To learn more about the advisory board, visit the EasyWriter catalog page and select “DEI Advisory Board” under the “Preview” tab.)

So when I picked up the July issue of College English, I was excited to see an essay by Esther Milu as the lead article, and one that provides another example of the kind of groundbreaking scholarship I mentioned earlier. In “Diversity of Raciolinguistic Experiences in the Writing Classroom: An Argument for a Transnational Black Language Pedagogy,” she calls our attention to what should be obvious: that Black students are part of a very diverse group. Yet too often, teachers seem unaware of this diversity, assuming that if students are Black, they must speak Black Vernacular English. Milu offers multiple examples of African students who have no experience with BVE:

Because US raciolinguistic ideologies are based on US-centric racial and linguistic formations, writing and literacy instructors tend to subsume all linguistic practices of Black students in one racial category—Black. (416)

In Milu’s experience, this tendency to lump all students who are Black into one language category leads to unfortunate results, particularly for Black students who come from a very wide range of other cultural and linguistic backgrounds. Furthermore, as Samy Alim points out, the “sociolinguistic order of things” in the US works to maintain the status quo, with white middle-class English “at the top of the language hierarchy.” But this focus on English, Milu notes, “fails to account for how other imperial languages of Europe . . . have historically contributed to a racist and oppressive ‘sociolinguistic order’ globally” (417). Ironically, raising student awareness about the hegemonic forces at work in (white) US English may fail to alert transnational and immigrant African students’ to the way that their indigenous languages have been erased or suppressed by European languages.

Milu then introduces us to five African students who “are not descendants of enslaved Black people,” and specifically to writing they have done about their experiences in a white US institution, writing that theorizes their language histories and identities and reflects on how those histories relate to their language development in general. Here is Osa, a second-generation Nigerian born in the US:

Americans view me as a foreigner. As soon as the see or hear my name, they assume that I am not an American. They assume that I am from out of the country and that I cannot speak English. They always ask, “Where are you REALLY from,” like I did not just tell them I was born in New Jersey. Also as a black girl that speaks African American Language (Ebonics) people marginalize me to be the stereotypical black girl. People from the black community assume that when I speak Sandard English I am trying to be something that I am not. They think that I am trying to be white. (433-34)

Osa’s writings point out the real complexity of her linguistic and cultural identity and underscore Milu’s call on teachers to recognize this complexity, with all its implications for our teaching. Texts like Osa’s are the heart of Milu’s essay, and I hope everyone will read the gripping stories these students tell.

Their stories, of course, are a large part of what leads Milu to recommend a move to a “transnational Black language pedagogy” (436), which she locates theoretically in the early research of Geneva Smitherman, with references to Smitherman’s own grounding in the work of Black scholars such as Beryl Bailey, Lorenzo Turner, and W. E. B. Du Bois. This pedagogy calls for “teaching slavery, colonialism, and racism together to better reveal how they contributed to raciolinguistic ideologies, racialization practices, and racist sociolinguistic order in US and various Afro-Diasporic contexts” (436-37). To do so, Milu says, writing teachers will have to “familiarize themselves with various approaches to language decolonization in Africa and other Afro-Diasporic contexts” and adopt translingualism as an “option to language decolonization in Africa . . . because languaging practices in post-colonial Africa, especially among the youth, are translingual” (437). In Milu’s view, a translingual approach to writing makes room for and values linguistic heterogeneity and “gives agency to users to draw language resources from their linguistic repertoire to achieve various writing and communicative ends” (438).

Some will push back against Milu’s advocacy of a translingual approach, arguing that it does not focus strongly enough on race (Milu mentions April Baker-Bell as one who might make this criticism). Milu acknowledges the conversation in progress among those who theorize and advocate for translingualism, critical language awareness, and various forms of antiracist pedagogy. More importantly, her perspective—and her presentation of a transnational Black language pedagogy—add a great deal of substance to the ongoing discussion.