Aristotle, the ancient Greek teacher, philosopher, and mapper of human knowledge, handed down to us many remarkable insights about how people think, remember, and communicate. But in one respect (at least) he was not quite on the mark. Defining humans as “rational” animals and positing logos or appeals to logic as most important to rhetorical persuasion, Aristotle relegated emotional appeals to the sidelines, wishing for a state in which people did not need such appeals to elicit agreement.

Today we know that emotions are central to how people make decisions and think about/interact with the world. From the work of cognitive scientists Luiz Pessoa, Antonio Demasio, and Steven Pinker to affective scientists like Giovanna Colombetti or Constance Pert, we are learning how deeply intertwined cognition and emotion are in the human brain and how emotions are distributed throughout the body.

Now Pixar director Pete Docter brings us Inside Out, a stunning animated film that explores some of these scientific findings. Docter apparently consulted scientists widely in developing the film, which is based on his observations and memories of his daughter’s emotional states when she was 11 years old. Two of these scientists—Dacher Keltner from Berkeley and Paul Ekman from UC San Francisco—recently wrote about their experiences with the film and its take on the five emotions (anger, joy, sadness, fear, and disgust) that vie for control of Riley, the main character:

They go on to say that emotions organize rather than disrupt the social lives of people as well, illustrating how the five animated emotions in Inside Out interact and direct Riley’s thinking and her relations with others. In another article, Professor Keltner says in terms of accuracy the film earns “a nine out of ten.” 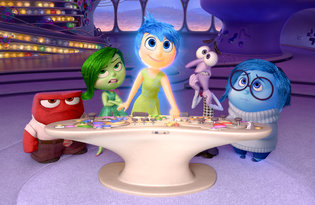 Riley's emotions in Pixar's Inside Out (Source: Pixar/Disney-Pixar, via Associated Press)

In commenting on the chaotic emotions Riley grapples with, scientists also have pointed out that the brains of people her age are still actively developing; indeed, parts of the brain aren’t fully connected until the mid to late 20s, especially the prefrontal cortex, which is the home of deliberation, planning, and decision making.

At this point, I can’t help but think of writing and its role in cognitive and emotional development. Because writing enables us to articulate, synthesize, and reflect on our own thoughts, it is often connected to mental and emotional health. Writing, it turns out, is literally good for you. What if Riley took up extensive journal keeping, getting all those voices in her head onto the page? Might she find ways for her emotions to “speak” to and through her differently?