Defining Truth in a Time of War 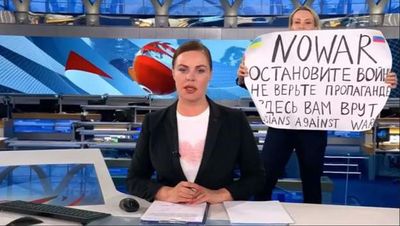 We live in disheartening times when disinformation is disseminated as if it were truth. And millions of people accept it as truth because they want to believe it. Disinformation is fueled by pathos, building on negative emotions like anger, hatred and even fear. Although pathos is an instrumental tool in argumentation, solely relying on pathos in arguments can create a skewed perception and spark horrifying (and even deadly) events like the Capitol Attack of 2021.  Recent findings by the January 6th Committee prove that the disinformation spread by Russia allowed former President Trump to breed distrust in the validity of democracy and attempt to unlawfully deny his successor his presidency.

While here in America we are dealing with that truth, we see in Russia an autocrat set on denying his people the truth. President Putin has stopped the publication of reports about what is really going on in Ukraine. Hitler used the same tactic to hide the truth of what he did in Germany. At that time, it was possible to hide the facts from the world in a way that is no longer possible. Now we have social media to fill in the gaps when all journalists except those sympathetic to the Kremlin have been silenced. We have reporters on the ground in Ukraine to report firsthand on what is happening as it happens. Putin is so afraid of the truth that he wants to control the language used to describe what Russian troops are doing in Ukraine. To do so, he has imposed a fifteen-year prison sentence on those who call the attack on Ukraine what it is: a war.

One Russian journalist, Maria Ovsyannikova, an editor and producer at Russian state broadcaster Channel One, was brave enough to storm her own news network during broadcasting with a sign that read "Stop the war! Don't believe propaganda! They're lying to you here!" Ovsyannikova told CNN’s Christiane Amanpour, "I have been feeling a cognitive dissonance, more and more, between my beliefs and what we say on air." In a statement prepared before her protest, Ovsyannikova said, “Unfortunately, I have been working at Channel One during recent years, working on Kremlin propaganda. And now I am very ashamed. I am ashamed that I’ve allowed the lies to be said on the TV screens. I am ashamed that I let the Russian people be zombified.” Ovsyannikova was released after fourteen hours of interrogation with a small fine but could still face harsher consequences. She argues that half of the Russian people disapprove of the war in Ukraine.

Another term that Russians are using to distort reality is "Nazi.” They are trying to justify their attacks on Ukrainians by saying that they are Nazis. There is no explanation of why they think that is true, but it is a term that connects the Ukrainian people with a known evil, so the use of the term is another strategy to hide the truth of what they are doing—massacring civilians.

There can be no validity to any argument that is not based in truth. No conclusion is valid if it is not based on facts or inferences grounded in reality. That is, unless acceptance is based on fear or unquestioning allegiance.

Photo: "Russian TV protester opens up about stunt"  by Just Click's With A Camera is licensed under CC BY 2.0